Lots of Light in the Biophotonics Tunnel 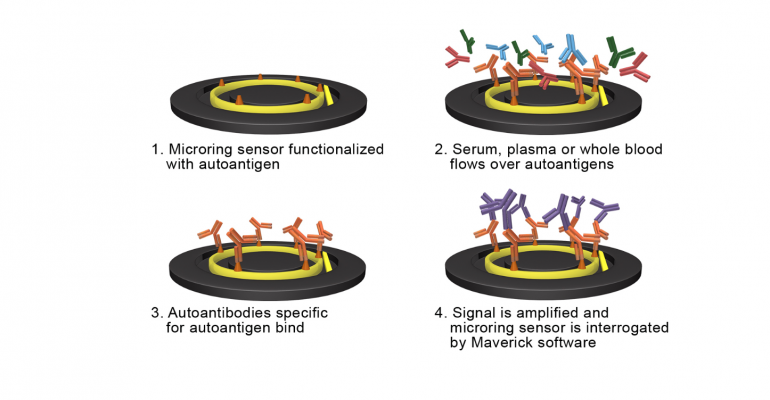 In a case of ironic coincidence recently, the Tandon School of Engineering at New York University and the U.S. Securities and Exchange Commission issued statements days apart about revolutionary technologies and those who develop them. In the case of the SEC, it announced it was charging Theranos executives Elizabeth Holmes and Ramesh Balwani with "an elaborate, years-long fraud in which they exaggerated or made false statements about the company’s technology, business, and financial performance.”

The NYU release, however, announced an early-stage advancement in fundamental physics that served as an emphatic counterpoint to the Theranos debacle: a team led by Stephen Arnold, the director of Tandon's Microparticle Photophysics Laboratory for BioPhotonics, had discovered a way to determine the density of electric charges on a tiny photonic microbead as well as the charge on a nanoparticle orbiting the tiny sphere.

For Arnold, who pioneered research into the physical properties of photonic microbeads in the mid-1990s, the discovery completes the theoretical loop of measuring the way biological agents are attracted to a photonic sensor's treated surface. The discovery also illustrated that revolutions in photonics-based clinical testing, based on solid and public science, might be on the doorstep of much wider adoption.

Biophotonic sensing as explored by Arnold is based on the straightforward theory that resonating light waves diverted from a beam into an adjacent curved structure, used to measure the presence of a desired agent, will measurably shift frequency if that agent fixes itself to the surface of the structure. The technology is dubbed Whispering Gallery Mode after a curved walkwayin St. Paul's Cathedral in London, which allows someone standing next to the wall to whisper and be heard anywhere along the circumference of the wall. The clinical promise of the technology is that lab tests that are now sent out for multi-day processing would be able to be done in a matter of minutes in the course of an appointment. This near-immediate return of results would enable clinicians to prescribe the correct treatment on the spot and give patients piece of mind and one less reason to skip compliance with doctors' advice.

"The physical principle is a lot like a guitar string," Cary Gunn, founder and CEO of Genalyte, the San Diego-based startup developing the photonics-based Maverick detection system. "We have an optical resonator instead of a mechanical resonator, but we are looking at the frequency. For a guitar string you hear a note, and that's the frequency it's vibrating at. If you were to spray paint a guitar string while it was playing, you would hear the note change, because the mass of the string changes, and the same thing with the ring resonator—as biomarkers bind to the ring resonator's surface, the frequency it resonates at changes."

“I had friends at Caltech [California Institute of Technology, Pasadena] who would make whispering gallery mode sensors by melting a piece of fiber until it formed a perfect little sphere, and it would take them a month to make one that would work,” Gunn said. "We need them commercially, so we print them in very, very large numbers on the surface of silicon wafers, and we can do it with high reproducibility and precision."

Gunn said there is virtually no limit on the number of optical rings, each of which measure about 30 microns in diameter, that can be fit onto a Genalyte chip, but the company is sticking, for now, with 128 resonators.

"The limit is how many diagnostic tests are there? And for us, you'll never test a patient for more than 100 individual biomarkers—at least today, we don't have that. So we've put 128 rings on the chip."

To operate the Maverick, Gunn said, a technician first draws a patient's blood sample (the system does not need to convert the whole blood to serum.) They put the sample into one well of a multi-well specimen tray, where it is diluted with a little bit of salt water. Then it is run over the Maverick instrument. "There is a little gasket over the chip, and we apply a vacuum and suck the sample up over the chip. That allows the blood to interact with the surface chemistry on top of the ring resonators, and we watch the resonators' frequency shift in real time," he said.

The frequency shift data is then sent to Genalyte's central laboratory and turned around in 15 minutes. Regarding the amount of blood required for testing, Gunn says "there's too much controversy surrounding finger prick samples now. So we decided that was a lightning rod and we were not going to grab hold of it."

Though the Maverick has yet to receive FDA approval—Gunn said “it's hard to comment on that. It's a little bit of a black box to us”—he and at least one other veteran biophotonics researcher say the resonator construction is proven, but the “bio” part is the next big hurdle.

“The biggest challenge always with this type of platform technology is things sticking to your sensor that you don't want to be there,” Ryan Bailey, the Robert A. Gregg Professor of Chemistry at the University of Michigan, said. “That's a real challenge taking this from bench science to the clinic. Everything likes to stick on these surfaces. It's constantly a needle in a haystack problem. You're trying to find that needle, but you have a big haystack that's really sticky.” 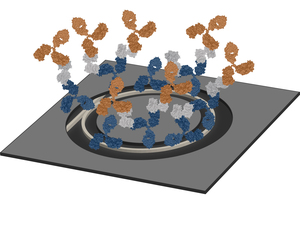 At left: Image is of sandwich immuno assay on a silicon microring.

Bailey and Gunn met while both were at Caltech and have maintained a working relationship over the years.

“We worked very closely to design the first instruments Genalyte produced, and our lab now has four Genalyte instruments,” Bailey said. “Basically, we are a beta testbed.”

The robustness of the silicon photonics platform is enabling Bailey and other researchers to seriously address the biochemical part of the equation, he said.

“We've been able to just make a lot of measurements, and I think that's a big advance in the field,” he said. “We've gone from a stage where people couldn't fabricate the devices very well, and working with Genalyte, we can use scalable silicon processing to make hundreds of resonators on a single device that all work perfectly well. In my group we are making thousands of measurements per day using these types of approaches.

“The technology is extremely robust. It really works. There's no smoke and mirrors. There are no hurdles in terms of how to produce the devices. The real hurdles are in how you develop multiplexed diagnostic panels that give clinicians new insights into how to personalize therapy for patients. There's no speculation in the technology—it's really just can it fit into a clinical workflow that provides value for practitioners.”

Arnold said he doesn't know to what extent other biophotonics researchers will embrace his team's recent discovery, but he is confident it is an important step for the field to move forward.

“We had distinct problems in trying to detect thyroid cancer markers at a single molecule level,” he said. “One of the reasons was we did not understand what the charge on the surface was, so it was hard for us to get signal. Now, however, these devices can detect single cancer markers. By that I mean on the single molecule level, for everything. There's no cancer marker that is too small to be detected by these devices, and now it can detect them faster because we basically understand the forces that are involved.

“The next few papers that come out of the lab will be extremely practical. I don't think I'm at liberty to say precisely what they will be, but they will have to do with now utilizing those forces in a way that superminiaturizes, even below what Genalyte has, those sensors. And, by the way, still leaves them with single molecule capabilities.”

For more details, watch the video resource "How Light Can Save Lives," from NYU Microparticle Photophysics Laboratory for BioPhotonics, explaining how Whispering Gallery Mode technology works.