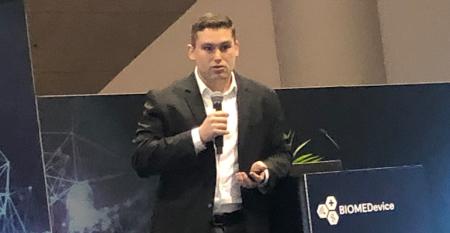 The Future of Healthcare Is Connected & Data-Driven
Nov 30, 2022
Erez Kaminski, CEO & Founder of Ketryx, spoke about the reality of developing cloud-based software in a changing regulatory environment.

Making FDA a Friend, Not a Foe
Nov 22, 2022
During BIOMEDEVice Silicon Valley, a panel will discuss the various types of engagement that sponsors can have...

Getting Down to the Root of AAMI ST91
Nov 21, 2022
Nelson Laboratories and Informa will host a webinar in December that looks into endoscope processing and the AAMI ST91 standard.

Elizabeth Holmes Sentenced to 11.25 Years for Theranos Fraud
Nov 18, 2022
The amount of restitution Elizabeth Holmes will have to pay will be determined in a separate hearing.

Managing Risk for Medical Devices
Nov 17, 2022
FDA held a webinar earlier this week, to help manufacturers understand how to tackle risk throughout the entire life cycle of a...

The UK Has a Surgical Backlog Crisis
Nov 17, 2022
Healthcare professionals call for urgent action as 7.07 million people in the UK are waiting for elective surgery.

3M Is in Hot Water Again Over PFAS 'Forever Chemicals'
Nov 16, 2022
California is suing 3M over its use of toxic substances known as PFAS – and this isn't the first time the company has landed in...

Insulet Issues Voluntary Device Correction for Omnipod 5 Controller
Nov 16, 2022
The company has received reports that heat generated by a poor connection between the cable and port has caused them to melt, deform, or discolor.

Medtronic Dropped This Bombshell on the Marketplace in 2014
Nov 15, 2022
Trivia Tuesday: What shocking clinical trial news did Medtronic drop on Jan. 9, 2014?

Shoot Your Shot, Medtech
Nov 14, 2022
What do basketball and medtech have in common? More than you might think!
Load More