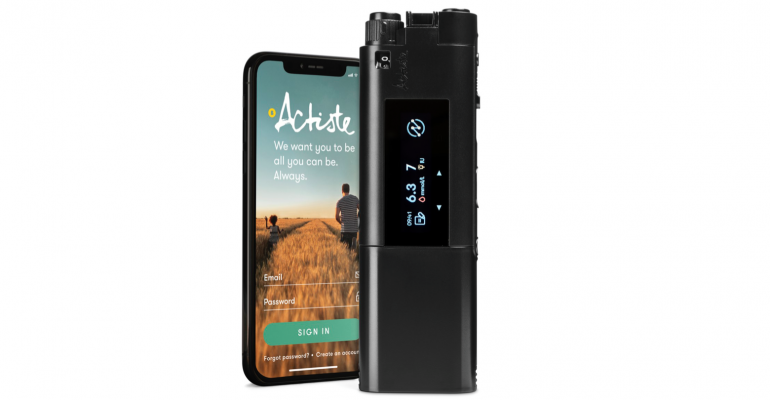 Image of the Actiste unified diabetes care device courtesy of Brighter. The product has been awarded two certificates of approval in Europe—one under the Medical Devices Directive, and one for the IVD Directive. In January 2019, Actiste was launched in the United Arab Emirates. Brighter is focusing on Southeast Asia, Europe, and the Middle East right now and has not yet begun the regulatory process in the United States.
The Actiste unified device combines four diabetes care products into one small unit, which enables patients to check blood glucose, administer insulin, make notes, and set reminders.

When asked how his company came to develop the Actiste unified diabetes care device, Brighter CEO Henrik Norström recalled the difficulty experienced by the company founder’s wife when she was expecting her first child. As a Type 1 diabetic, she needed to monitor her blood sugar levels frequently. “The tools that were available then were independently good,” said Norström, “but as a group of tools they were not compatible because it was difficult just to remember when you took your last insulin dose, and if you did remember, how much did you inject?”

Norström explained that was how the concept of unifying came into play. “Basically we designed a concept from a perspective that integrated the monitor and the injection device into one unit.”

Four components—a blood sugar monitor, test strips, a lancet, and the injection device—are integrated into the Actiste system. “And then we incorporated what we call an eSIM card, which is like giving the device connectivity similar to a phone, making it completely independent of other devices,” said Norström. “It connects to the mobile network on a global scale so that the data (blood sugar values, the methods that are used, and the exact injected dose of insulin) is stored both on the device and also sent through the mobile network to the Brighter cloud.” He said that patients can also designate certain other parties with whom to share data.

They can also use the app to stay on track and share treatment data directly from an iOS or Android smartphone.

The Actiste is delivered as part of a subscription service, which includes global connectivity, different levels of data sharing, continuous replenishment of everyday supplies, and enable individualized coaching to optimize and improve treatments.

“It's an end-to-end service in terms of using the consumables, the test strips and needles, the lancets,” said Norström. “And because we provide that as part of the service, we know how many consumables patients are using, and we can also facilitate delivery to the patient's home of renewable stock.” He went on to say that that Brighter takes environmental responsibility by collecting the residual consumables, as well as wipes, and then recycles them to make sure that there is no environmental impact from Brighter in the world.

“The majority of our customers will be Type 2 insulin-dependent patients,” said Norström. He noted that many patients don’t bring their blood sugar monitors with them when they go out and just take insulin instead and inject it based on gut feeling. The Actiste would enable patients to bring all the supplies in a small unit. “Even if you're only on one shot a day of insulin, it's very convenient to have the Actiste solution because it reduces the barrier to comply to the treatment and automatically records all critical data,” he said. “And they don’t have to worry about it because it just works. The easier we can make it, the more successful we will be in increasing adherence, which leads to better quality of life.”

In 2018, Actiste won the prestigious Red Dot Design Award for the way it combines several critical diabetes-care functions in a single device and for its clear user interface and the quality of its companion app for smartphones and tablets.

Brighter is focusing on Europe and the Middle East right now and has not yet begun the regulatory process in the United States. Because of its complex nature, combining in vitro diagnostic components as well as medical devices, Actiste has been awarded two certificates of approval in Europe—one under the Medical Devices Directive, and one for the IVD Directive. In January 2019, Actiste was launched in the United Arab Emirates, and Brighter is focusing on initiating the service next in the Middle East, Sweden, and Southeast Asia.