Early-Warning System for Detecting Infections Is Being Studied 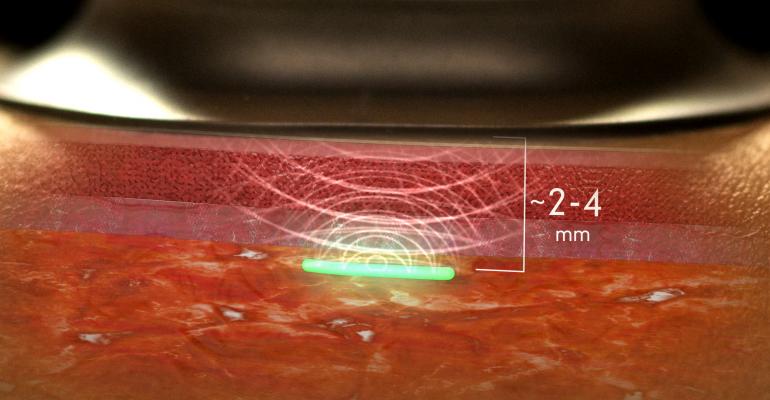 Profusa’s Lumee Oxygen Platform shown below skin. Image courtesy of Profusa.
In a new study, Profusa’s Lumee Oxygen Platform, which measures biochemical changes in real-time, is being used to detect changes in a patient’s body chemistry that can help identify if it has become infected with a virus or bacteria, potentially up to three weeks earlier than current methods.

Most of the early physiological and biochemical changes that could be an indication of an infection in a patient’s body are asymptomatic, said Ben Hwang, chairman and CEO of Profusa, in an interview with MD+DI. “People don't see or feel [them],” he said, noting that it could be weeks before patients present with symptoms such as a fever or cough. But in the meantime, as we have seen with the COVID-19 pandemic, asymptomatic people could be spreading diseases unknowingly.

“What will be helpful is to be able to identify individuals at the presymptomatic stage, so that you could actually create interventional procedures along that population before they are symptomatic, and before they can pass on the disease to somebody else,” Hwang said.

He believes that Profusa’s Lumee Oxygen Platform will be able to do this. “The hypothesis is that our sensors could actually pick up those changes before an individual realizes [that he or she] has a fever or a sore throat,” he said.

To prove this, Profusa is currently conducting a study, in collaboration with RTI International and research centers including Duke University and Imperial College London, to potentially assist in the early detection of influenza outbreaks. The goal of the study is to develop an early identification system to detect not only disease outbreaks but also biological attacks and pandemics up to three weeks earlier than current methods. The results of the study are anticipated to be available in 2021.

In the study, “we are asking these patients to wear our Profusa reader 24 hours a day, seven days a week, so we're continuously gathering information,” Hwang said. “We're keeping track of basic biochemistry biometric markers, such heart rate, breathing, etc. And we know when these subjects are inoculated with a mild form of flu virus, and then we keep track of them in a hospital and clinical setting, from healthy to infection to symptomatic to the recovery stage.”

Hwang said that information will then be analyzed. “Our idea then is to be able to take a look at that data and see the tell-tale biochemical signatures that we could actually detect in the asymptomatic stage,” he said. “Once that is figured out and this is calibrated and referenced, then we'll be able to launch this particular application in the market broadly.”

There are three components to the Lumee Oxygen Platform. “The first is a small sliver of a material called hydrogel, very similar to a contact lens,” said Hwang. The smart gel is linked to a light-emitting molecule that emits a fluorescent signal in the presence of one or more body chemicals such as oxygen, glucose, lactate, or other biomarker. “The hydrogel material is inserted under the skin into the subcutaneous space via a hypodermic needle injection,” Hwang continued. “And you now have in place inside the body a small little laboratory.”

The platform’s third component is the software. “The reader then can take that reading and send it via Bluetooth to a phone or to a tablet,” Hwang said. “And the software program then displays the signal in a way that the physician or individual can make sense of what that number means.”

Profusa’s first application of the technology, which is CE marked in Europe, measures dissolved oxygen at the tissue level in the fluid that bathes cells.

But Hwang sees this technology being used for many more applications. He said everybody can benefit from having real-time information about their health. “I think it's profound in that way that everybody could actually start leveraging medical-grade technology to make better, more actionable, and more relevant health choices,” he concluded.