This Device Has Been Around for 20 Years 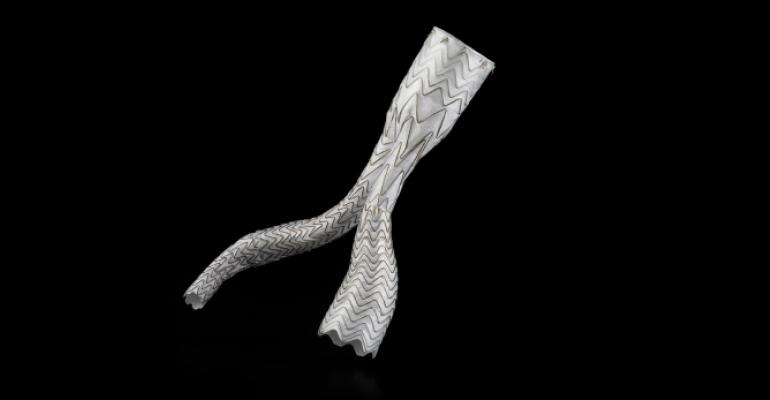 It comes in different sizes and configurations now, but the Gore Excluder AAA Endoprosthesis, which seals off abdominal aneurysms from inside the aorta, hasn’t changed radically since it was introduced to the European market in 1997.

The endovascular aneurysm repair (EVAR) device has been implanted in more than 300,000 patients diagnosed with an abdominal aortic aneurysm (AAA), according to its manufacturer, W.L. Gore & Associates. Before EVAR, patients with AAA had two options: major surgery to repair the aneurysm or crossed fingers.

“The number of patients who were not candidates for surgery really drove the early experience of EVAR,” Eric Zacharias, vascular business leader for Gore, told MD+DI Qmed. “And now it's really a procedure that, particularly in the U.S., it’s the primary choice of patients if they’re given the option of having their aneurysm treated.”

The aorta descends from the heart into the abdomen, splitting in two to deliver blood to the legs. AAA’s typically develop below the kidneys, closer to that split. Gore’s EVAR device is made of two components: the trunk section that anchors at the proximal end of the aneurysm and descends into one of the aortic branches in the leg; and the contralateral leg segment that fits inside the trunk and descends into the other leg. To place the device, the surgeon makes one small incision on either side of the groin and uses catheters to thread the device into the anatomy.

The biggest change to Gore’s EVAR device occurred in the early 2000s after physicians discovered that some blood serum components were leaking through its walls. The company added an impermeable layer of film within the Gore-Tex layers of the stent graft to stop the leaks.

“That was the only (major) change we’ve made to the implant in the last 20 years,” Zacharias said.

Additionally, some early devices had a mismatch between the nitinol frame and the graft, or faults in the way the graft attached to the frame. The devices developed holes, leading to “some pretty catastrophic wear events,” Zacharias said.

The company also learned that many patients’ aortas were degenerating in the seal zones in the proximal and distal ends of the stent. Because AAA is also a progressive disease, patients’ aortas tend to continue weakening and change shape over time, prompting the company to develop different shapes and conformable devices.

Physicians advised Gore on changes that needed to be made in how to affix, anchor, and seal the device within the aorta. Gore added an anchoring system on the proximal end of the EVAR to hold it in place and allow it to respond to anatomical changes. The company has also made strides in its catheter-based EVAR delivery, making the aneurysm easier to access and enabling more accurate device positioning.

“The whole goal is to bypass the aneurysm,” Zacharias said. “When you place those devices, they need to serve that same function in a reliable and durable way.”

The changes have resulted in better outcomes, according to company data. Gore established the Global Registry for Endovascular Aortic Therapy in 2010, closing enrollment at just over 5000 patients in 2016. The latest data generated by a three-year postprocedural follow-up of 3273 patients showed a 98.5% survival rate, freedom from reintervention at 93.4% and freedom from aneurysm enlargement greater than 5 mm at 92%, the company noted. The rate of conversion from EVAR to open surgical repair was 0.4%, and incidence of Type 3 endoleak (holes, defects or separations in the graft fabric) was 0.2%.

Repairs to those types of endoleaks up to five years post-implant push the costs of EVAR close to those of open AAA surgery but the long-term outcomes remain similar, with less morbidity risk from EVAR, according to Zacharias.

EVAR prices remain stable, and the company is working on producing them less expensively. Future bundled payment initiatives will create “an interesting balance” in the continued evolution of AAA treatment options, according to Zacharias.

“We are doing things within our product development cycles to ready us for devices that perform to the CLSI clinical standards, that are cheaper for us to produce and are therefore cheaper for the patients and the healthcare systems,” he said.