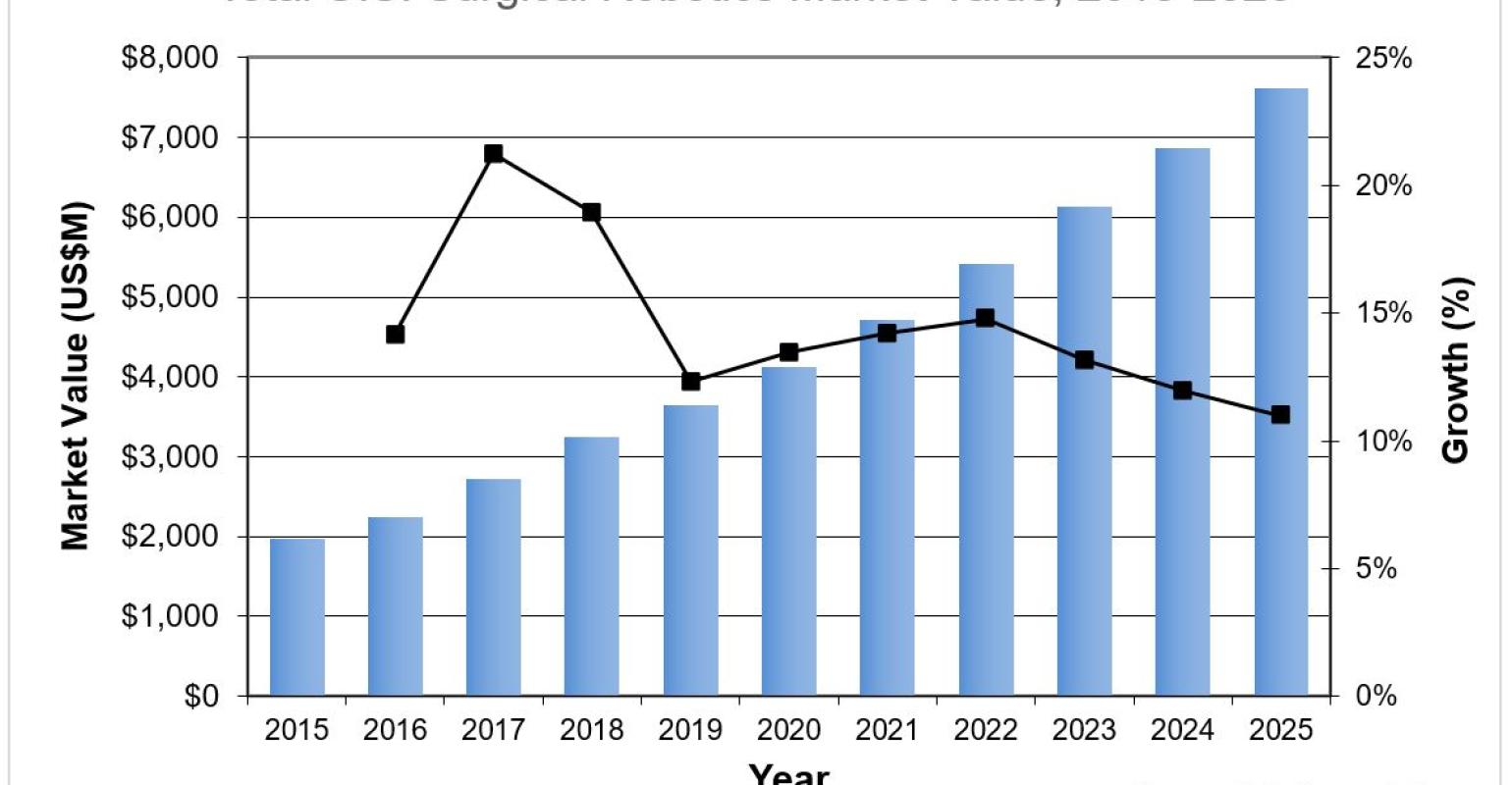 Is an R&D Race Driving the Surgical Robotics Market?

With increasing competition, the way to gain market share in this quickly growing market is with innovative technology.

Robotic-assisted surgery has emerged with an attempt to overcome the limitations of traditional minimally invasive surgical procedures. With increasing competition, the way to gain market share in this quickly growing market is with innovative technology. This means R&D is at the forefront of this market, driving adoption, expanding applications, and leading to a market that will more than double in size by 2025.

It’s been a steady trajectory since the first medical robot, Arthrobot, was developed in Canada in 1983 for use during orthopedic procedures1. Then, the first robotic-assisted procedure, neurosurgical biopsy, was performed with the PUMA 560 platform in 19852. Intuitive Surgical's da Vinci platform, the most prominent representative of the robotic-assisted surgery market today, first received FDA approval in 2000. Since then, a significant number of market players have entered the lucrative robotic-assisted market, further expanding the applications.

A number of startups and large, well-established corporations are currently involved in R&D activities and are planning to enter the robotic-assisted surgery market in the near future. The total robotic-assisted surgery market in the United States is projected to exhibit a nearly four-fold increase from 2015 to 2025 and nearly two-and-a-half-fold increase from 2018 to 2025. This impressive growth is expected to be primarily driven by increasing adoption of robotic surgery for spinal and total knee replacement applications as well as an increasing interest in flexible robotic endoscopes.3

The robotic-assisted spinal surgery market is projected to exhibit the fastest growth in the entire surgical robotics market in the United States, skyrocketing to nearly half a billion dollars by 2025. The orthopedic robotic-assisted market, which is forecasted to be the second fastest-growing segment in the overall surgical robotics market, will be primarily driven by increasing adoption of total knee arthroplasty robotic application.

There has been an increasing interest in the robotics market from large implant manufacturers that consider robotics to be a powerful driver for implants sales. An illustration of such a market trend is the acquisition of Mazor Robotics by Medtronic at the end of 2018, taking ownership of the Renaissance and Mazor X robotic systems. In addition, Globus Medical entered the spinal robotics market with its ExcelsiusGPS platform in 2017.

Other implant manufacturers that plan to launch robotic platforms include DePuy Synthes, Zimmer Biomet, and Stryker. Zimmer Biomet has inherited Medtech’s Rosa robotic system with brain and spine surgery applications after its acquisition of Medtech back in 2016. However, in 2017, Zimmer Biomet released a voluntary field action notice to the platform users citing a software problem for some Rosa Spine models4. Having chosen to initially focus on the large joints robotic business, the company announced its plans to launch the total knee Rosa application in the middle of 2019. In the first quarter of 2019, Zimmer Biomet received FDA clearance for the Rosa platform with knee surgical application and Rosa One Spine platform.

This massive list of companies making an entrance to the U.S. surgical robotics market might also include Tinavi Medical Technologies and AOT over the next few years. The Swiss company AOT has developed the CARLO (Cold Ablation Robot-guided Laser Osteotomy) product in collaboration with KUKA Robotics. CARLO is the first device that can cut bone and hard tissue in a non-contact way with the use of a laser. Tinavi Medical Technologies, a private Chinese company, has developed the TiRobot robotic system for screw implantation during spine and other orthopedic and trauma procedures. In 2016, the TiRobot received regulatory approval in China. According to some market experts, the company may be in the process of obtaining regulatory approval for its robotic system in Europe and the United States.

While Auris Health (acquired by Johnson & Johnson) and Medrobotics market FDA approved flexible robotic endoscopes, there are a number of other companies that are developing similar devices. In February, Intuitive Surgical received FDA clearance for its lung biopsy flexible robotic platform.

Samsung, a South Korean multinational conglomerate, is developing a minimally-invasive surgical robotic platform. According to the patents filed by the company, the robotic platform will likely feature endoscopic flexible arms. Memic Innovative Surgery, an Israeli company, features its Hominis surgical system with 360-degree articulation flexible arms. The robot’s first application is intended to be gynecology via a vaginal approach. Endomaster, a company based in Singapore, is developing the Master System, an endoscope with small robotic arms enabling robotic-assisted endoscopic surgery. The KAIST Future Medical Robotics Research Center has developed the first flexible robotic endoscope in South Korea called K-FLEX, which is expected to be fully commercialized in the near future. These companies might be expected to enter the U.S. robotic-assisted market over the coming years, threatening the position of current market leaders. Considering the historical trend, the surgical robotics market in the United States may expect a number of mergers and acquisitions to be completed in the near future.

As one of the fastest growing markets in the United States, surgical robotics has a trajectory for immense impact on a variety of surgeries. The pending pipeline of products in development shows incredible amounts of capital being spent to advance this field, and the pending competition will significantly shake up the market and cause the long-established players to be on the watch.