Does The Future Of Robotics Lie In The Imagination?

Researchers show that people can control a robotic arm with their minds. 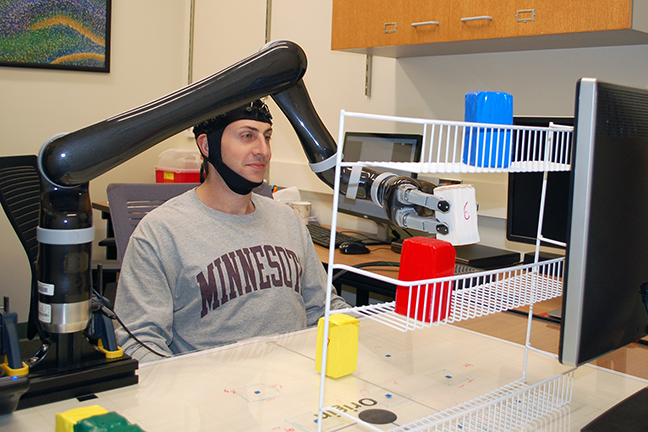 A study participant, fitted with a specialized brain cap, learns to move a robotic arm with his mind

Dr. Seuss taught young readers the endless possibilities of an active imagination with his classic story, "Oh, the Thinks You Can Think!" But a mind-controlled robotic arm that doesn't require a brain implant could have been a stretch of the imagination even for Dr. Seuss.

Eight study participants at the University of Minnesota have helped to prove the possibilities of using brain-computer interface technology to reach and grasp objects with a robotic arm using only their thoughts.

The work represents the first time anyone has been able to accomplish such tasks in a complex 3-D environment, according to Bin He, a University of Minnesota biomedical engineering professor and lead researcher on the project. "Just by imagining to move their arms, they were able to move the robotic arm," He said.

The team is motivated by the potential to help people who are paralyzed or have neurodegenerative diseases by developing a noninvasive technology (no surgical implant required) to enable them to control an external device, such as a prosthetic arm, He told Qmed.

"We were surprised to find out from the work that a group of human subjects can learn to do a good job controlling complex tasks, such as reach and grasp in 3-D space using a noninvasive device," He said.

"It is only research now," said He, who also serves as the director for the University of Minnesota's Institute of Engineering in Medicine. "But we hope such line of research [will] benefit lots of people in the future."

The study was published this week in Scientific Reports, a Nature research journal. The team used a technique called electroencephalography (EEG) to record weak electrical activity of each participant's brain through a specialized, high-tech EEG cap fitted with 64 electrodes and convert the "thoughts" into action by advanced signal processing and machine learning.

To explain how the brain-computer interface technology works, the researchers credit the geography of the motor cortex, the part of the brain that governs movement. When people move, or think about a movement, neurons in the motor cortex produce tiny electric currents. Thinking about a different movement activates a new assortment of neurons, a phenomenon He confirmed with functional MRI in an earlier study.

That earlier work, published three years ago, showed participants could fly a small quadcopter using the EEG technology. But even then, He admits the team was not sure how well it would work with a more complex robotic arm.

The researchers plan to further develop the technology using a robotic prosthetic limb. They also want to see how well the EEG cap works for someone who has had a stroke or is paralyzed.

[Image credit: College of Sciences and Engineering, University of Minnesota]