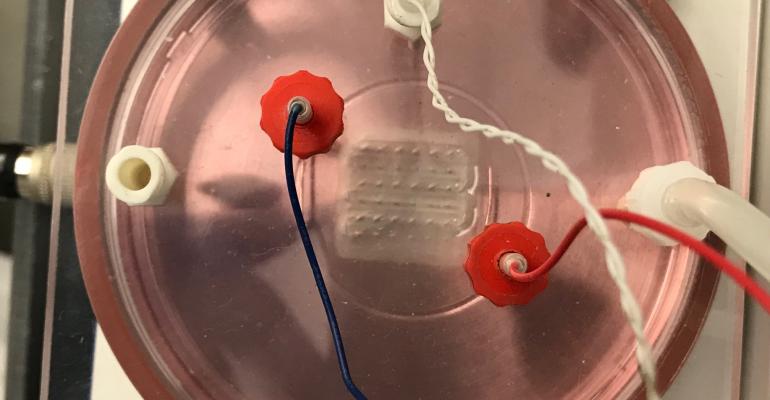 Biolife4D has achieved a milestone in its ultimate quest to develop human organs for transplant. The company recently announced that it has developed a cardiac patch using a highly specialized 3D printer designed to protect living cells during the printing process. The patch is designed to help patients recover heart function after an acute myocardial infarction, said Ravi Birla, PhD, the company’s chief science officer, in an interview with MD+DI.

“Over several weeks, acute myocardial infarction results in scar formation and progresses to chronic heart failure, severely dampening cardiac output, the ability of the heart to pump blood,” said Birla. “The cardiac patch could limit the progression of acute heart failure toward chronic heart failure, thereby stabilizing the condition of the patients,” said Birla. He added that although the patch hasn’t been used in patients yet, he expects the technology to move to preclinical testing very soon.

Birla explains that the human heart muscle consists of a hierarchical organization of contractile cells, structural components, and a complex vascular network. These individual functional parts act together to support heart muscle contraction. A specialized cell type is present within each area--cardiomyocytes for muscle contraction, vascular endothelial cells within the inner lining of blood vessels, and fibroblasts to provide structural supports.

“The 3-D cardiac patch bioprinted by Biolife4D contains all three cell types,” said Birla. “It is designed to recapitulate mammalian heart muscle in both form and function.”

The company’s bioprinting process begins with isolating a patient’s own white blood cells. This eliminates the risk of rejection or the need for immunosuppressant therapy that has plagued conventional organ transplant methods.

The cells are then reprogrammed to become induced pluripotent stem (iPS) cells. This conversion is a process that is driven by four developmentally regulated transcription factors--OCT4, SOX2, KLF4, and L-MYC, said Birla. The efficiency of the conversion process is measured by expression of OCT4 and NANOG transcription factors.

The newly formed iPS cells have several important characteristics. They can divide and renew themselves; they are unspecialized; and under certain conditions they can become tissue‐ or organ‐specific cells with specialized functions. These iPS cells can then be differentiated into the different types of cardiac cells through a proprietary process developed in the company’s labs, which consists of a cocktail of transcription factors and cardiogenic compounds, said Birla.

“The process results in cardiomyocytes that maintain strong contractility and can be maintained in culture for several months,” said Birla.

“Bioprinting the 3-D cardiac patch was a significant milestone for Biolife4D and was accomplished sooner than anticipated,” said Birla. “Based on our success with the cardiac patches, [we] have greater confidence in bioprinting human hearts,” he adds, noting that the company expects to achieve this objective within a short timeframe.