Has Medtech Shifted to a Seller's Strike?
May 20, 2022
Medtech in a Minute: The Industry Loses a Legend, and More
May 20, 2022
NeuroOne’s Bid for Long-term Use of Evo sEEG Shot Down by FDA
May 20, 2022
Minnetronix Improves Image Quality with Surgical Camera and Other Supplier News
May 19, 2022 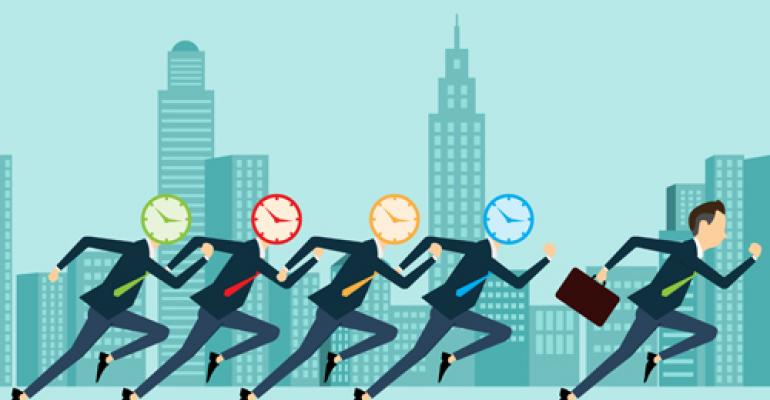 FDA's 510k clearances allow the majority of medical devices to be on the market. Which state has the edge in terms of speedy clearances?

FDA's 510k clearances allow the majority of medical devices to be on the market. Which state has the edge in terms of speedy clearances?

Criticims of the FDA has abated recently but even a few years ago a top complaint was the delay companies faced in obtaining the regulatory greenlight for products that are not deemed risky by the agency.

In 2011, the Institute of Medicine issued a comprehensive report that essentially asked to do away with the 510(k) pathway altogether. FDA didn't quite do that although it has taken industry criticism to heart and has made some improvements in making the process is less onerous and more speedy.

Still there will be winners and losers in the race to win the 510(k). LifeScience Alley, a Minnesota trade association analyzed data from Evaluate Medtech, part of market intelligence company Evaluate, to create a scorecard of sorts to answer the question of which state takes the least amount of time to win clearance for their products. The results are below. 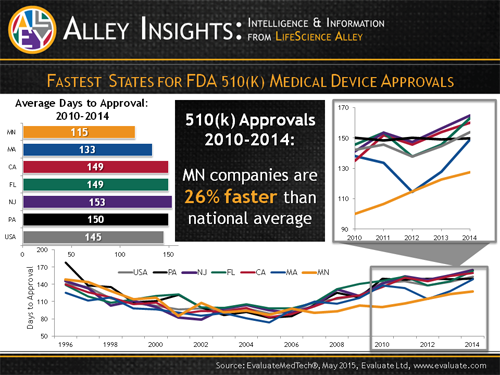 It appears that between 2010 and 2014, on average, Minnesota companies won clearances 26% faster (30 days) than companies nationally which on average got the regulatory nod at 145 days. Massachusetts follows with 133 days while California and Florida are tied in third place requiring 149 days each.

The companies that had the most 510(k) clearances in the five-year period are Medtronic, Boston Scientific, St. Jude Medical, Coloplast, 3M, and Zimmer Spine.

Being a regional trade association, LifeScience Alley accounts the competitive edge the state has to the fact that Minnesota is home to the biggest names in the medical world globally who have built up regulatory expertise over several decades.

The assertion is not without any merit.

Medtronic may have moved its headquarters to Dublin, Ireland on paper, but the infrastructure and knowhow still resides in the state of 10,000 lakes. St. Jude Medical has its headquarters in the state and Boston Scientific maintains sizable operations in Minnesota, although it is based in Marlborough, Massachusetts. A whole medtech ecosystem has developed around these large OEMs, not to mention executives moving from these larger companies to join smaller medtech ventures.

It will be interesting to see whether Minnesota maintains its no.1 rank when LifeScience Alley releaves PMA approvals data in a few weeks.