Home>Regulatory & Quality
Recent
Cue Closes on $235M Private Placement to Accelerate Growth
May 14, 2021
Your Phone or Smart Watch May be Messing up Your Pacemaker
May 14, 2021
Medtech in a Minute: Medtronic for the Win, and More
May 14, 2021
Tangible Solutions Expands to Meet 3D Printing Production Demands and More Supplier News
May 14, 2021 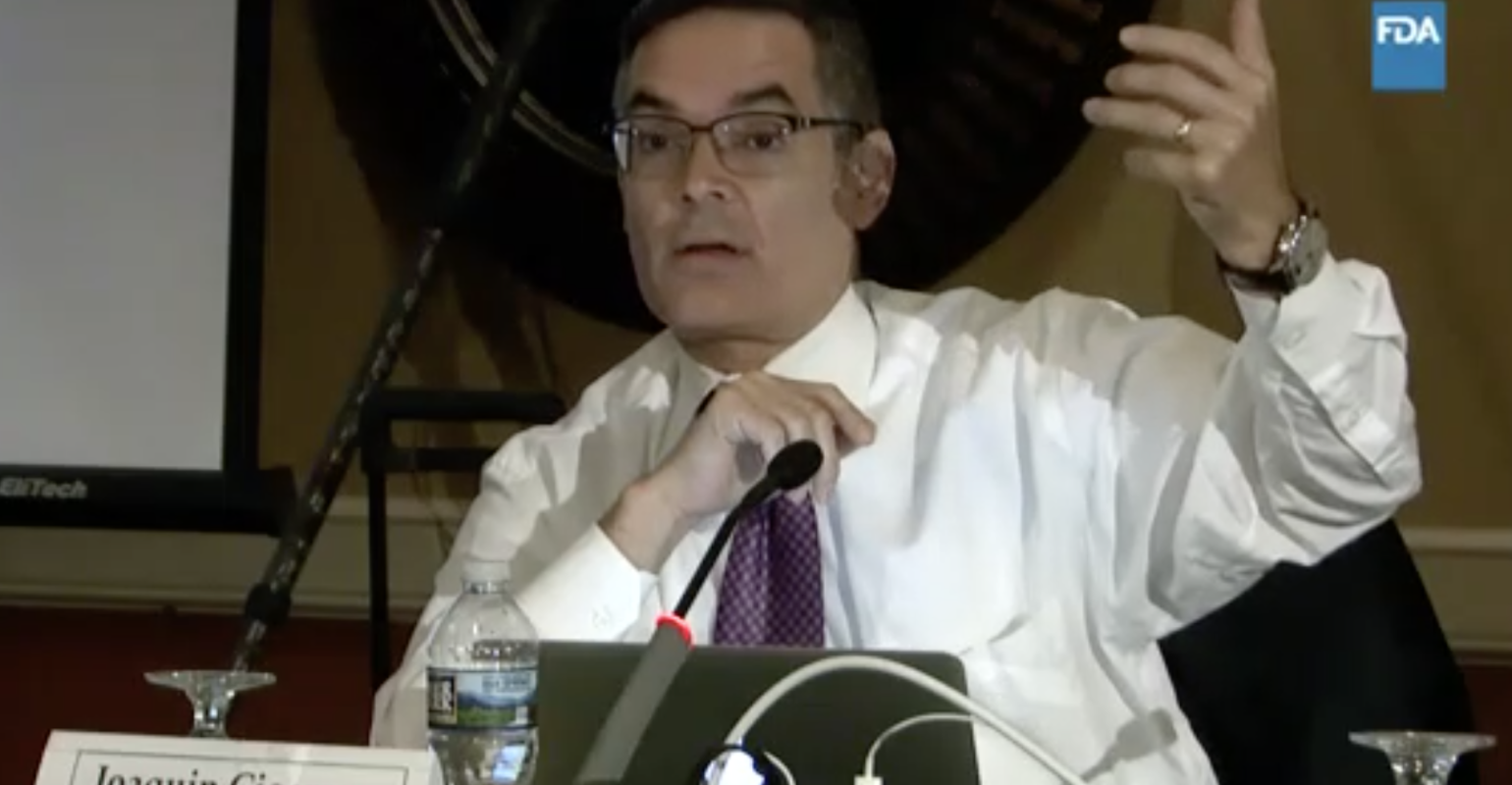 After two days of presentations regarding the death risk that may be associated with paclitaxel-coated balloons and paclitaxel-eluting stents on the market and in clinical trials, FDA learned a lot about but the agency still has a lot of work to do before any concrete decisions are made regarding the risk-benefit of the devices in question.

How The Paclitaxel Debate Began

To recap, paclitaxel balloons and stents received some bad press in late December 2018 after a meta-analysis showed an increased risk of death for patients treated with these devices.

After conducting a preliminary analysis of long-term follow-up data (up to five years in some studies) of the pivotal premarket randomized trials for paclitaxel-coated products indicated for PAD, FDA sent a letter to healthcare providers in March, urging physicians to seek alternatives to paclitaxel-coated devices. The agency said its preliminary review of the data identified "a potentially concerning signal of increased long-term mortality" in clinical trial patients treated with these drug-coated devices compared to patients treated with uncoated devices.

While the meeting of FDA's Circulatory System Devices Panel, which concluded Thursday, served up a significant amount of debate and discussion on the topic, it was unclear by the end of the two-day meeting what FDA's next steps will be.

"We've learned a lot but there's a lot to do now and we look forward to continued collaboration in this field," said Bram Zukerman, MD, director of the office of cardiovascular devices at FDA's Center for Devices and Radiological Health (CDRH), in his closing remarks on Thursday.

The Data Is Messy, to Say the Least

Perhaps the biggest takeaway from the two-day meeting is that the agency is clearly befuddled by the discrepancies present in the available data.

"At the end of the first day of presentations, FDA concluded that there is a signal associated with an increase in mortality through five years of paclitaxel-coated devices as compared to non-coated devices," Eleni Whatley, PhD, a lead reviewer at FDA, said at the beginning of the second day. "We made attempts to acquire missing data and assessed for the impact of missing data and believe that the mortality still exists given this missing data. However, no relationships were determined based on specific subgroups and to date, no causality could be attributed to this increased mortality."

She noted that the approved drug-coated balloons and drug-eluting stents that use paclitaxel have varying characteristics incl drug dose density and max total drug load, however, in many instances in both clinical and animal studies multiple devices were. Those variations in the pooled data were a key concern for many of the stakeholders who presented.

"I don't think I've ever seen an example where a particular - we'll call it exposure - of the drug has such heterogeneous concentrations across these different devices," said Kevin Kip, a distinguished USF health professor at the University of South Florida. "That's about as wide a range as you'd ever see in terms of dose."

Kip, who served as a temporary voting member during the meeting, asked FDA representatives if, when pooling the available data, the agency considered taking the distribution dose within each study, breaking up the sample size into quintiles and then pooling them.

"Because the range is so dramatic across the studies I think that would be a more powerful test of dose response. Now you wouldn't be able to zero in on if there is a dose that seems to matter the most because you're standardizing by doing that ... but I think it would give more insight into whether there's a dose response," Kip said.

The FDA representatives appeared responsive to that recommendation.

"Regardless of which aspect of the science we're talking about the theme here is we need better standardization between companies and better use of methodology and certainly the agency in follow up will be looking at the proposal by Dr. Kip," Zuckerman said.

Joaquin Cigarroa, MD, associate chief of clinical cardiology at the Knight Cardiovascular Institute and a voting member of the panel, said it is important to think about the models being used when analyzing the data given that there is no signal associated with an increased risk of mortality in the aggregate of data at one year but there is a signal associated with an increased mortality risk long term.

"What we're trying to assess is a mechanism in the context of the signal where we saw excess death across cardiovascular and malignant conditions," Cigarroa said. "As we saw yesterday each of those histogram bars at five years, in the data that we have access to, with the recognition that that data is challenged ... the signal begins to occur between years three and five and so I think the models that we need to contemplate are different."

But the Benefits Are Important Too

Others, like Col. Todd Rasmussen, MD, cautioned the agency about going down a rabbit hole of risk and miss what is unambiguous, which is the benefits associated with paclitaxel-coated balloons and paclitaxel-eluting stents. He cited the key benefit of these devices as being a significant reduction of target lesion revascularization.

"As we look at risk I think there is ambiguity that is abound meaning we struggle with 'is this a signal, what's the cause, the lack of data ... it is unclear, there's ambiguity," said Rasmussen, an attending vascular and endovascular surgeon at Walter Reed National Military Medical Center who also served as a temporary voting member on the panel. "There is clarity to benefit and I want to make sure we don't lose track of the clear benefit to patients that are treated with this technology."

Eric Secemsky, MD, a physician affiliated with the Beth Isreal Deaconess Medical Center and Harvard Medical who presented at the meeting made an interesting point regarding the quality of life benefit versus the long-term survival of the patients who are typically treated with the devices.

"When we revascularize claudicants it has nothing to do with survival. We've never tried to revascularize a leg to extend life, we've never studied therapies to try to extend someone's life based on a local therapy like a treatment with a stent or a balloon," Secemsky said. "Our goal for lower extremity revascularization is purely quality of life, improvement in walking. ... The technology, the reason for the intervention, everything we're doing at the patient level is not actually something we're considering is influencing mortality ... we're trying to look for an improvement in the quality of life and usually, it's on a short term, it's usually on a one-year term."

Schuyler Jones, MD, who presented on behalf of the American College of Cardiology, agreed with Secemsky.

"When we treat the leg we often think about symptom improvement, not so much about cardiovascular risks," Jones said. "We do care about our patients, we do want the devices to be safe. As we think about the things that are least studied, certainly medications devices and anatomy are the most frequent things I think about that we could use more definition to improve the care of our patients."

Patients and Physicians Have a Right to Know

Stephanie Fox-Rawlings, PhD, National Center for Health Research urged FDA to add the mortality risk information to the labels for these devices to help doctors and patients make informed care decisions, even if there are still questions surrounding the meaning of the data.

"Any potential increase for death is important for healthcare professionals and patients to know about so that they can make appropriate decisions about whether to use a product," Fox said. "We also agree that there are unanswered questions about the clinical trial data and the cause for the increased risk. More research is clearly needed."

Fox also asked the agency to consider absolute risk information rather than just relative risk when considering such label changes.

The issue serves as a reminder of the value of long-term post-market studies, Fox said.

The Chilling Effect Felt Across the Industry

Gary Jarvis, a non-voting panel member who represented the industry during the meeting, talked about the impact the paclitaxel device issue has had on the industry and on physicians.

"When this metanalysis came out, it was published in December, and it threw the industry and physicians for a loop," Jarvis said. "Everybody's talking about this and everybody has been really collaborative in trying to work on this. That's one thing I hope that the industry does is to continue this collaboration beyond this meeting."

But the biggest sting came on March 15 when FDA published its letter urging physicians to seek alternatives to paclitaxel-coated and paclitaxel-eluting devices.

"This letter has put a chilling effect across the clinicians in this country and how they treat patients because all of a sudden devices that are sitting on their shelves that are indicated for use, all of a sudden now they're thinking 'am I putting my patients at risk by using these devices?' So if there's anything I could ask FDA here today it would be please give the clinicians and industry as much reassurance as you can that when they continue to use these devices within their indications that they are safe and effective and are not going to harm their patients."

Jarvis also noted that some researchers are having trouble enrolling patients in ongoing clinical trials because of this issue.

Patricia Daigle, RN, ENP, who represented consumers during the meeting, emphasized the importance of consumer choice.

"I know there are high-risk factors and I think the consumer has the right to be aware of the risk-benefit that they have, but ultimately the choice should be up to the consumer and that [class of devices] should be one of the choices to choose from," Daigle said. "It's their choice which type of life they're going to live."

Your Phone or Smart Watch May be Messing up Your Pacemaker
May 14, 2021