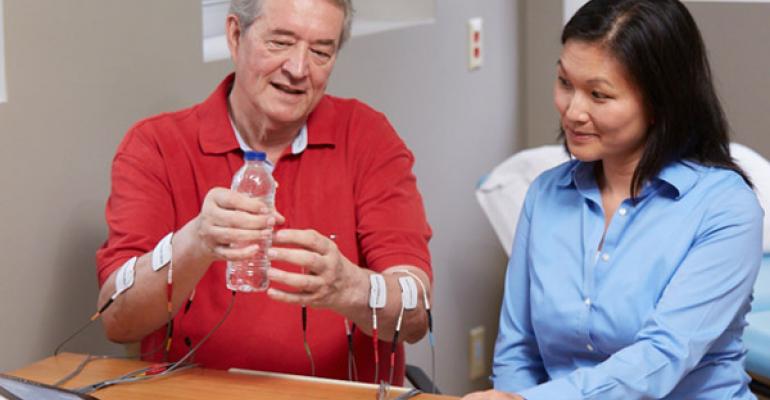 MyndMove attached to patient's arms at University of Toronto
Innovative new technologies are helping patients who have suffered a stroke get back to performing everyday tasks like walking and drinking from a cup.

Watching someone who has suffered a stroke try to perform everyday actions such as walking down the sidewalk or even bringing a cup to their lips can serve as a sobering reminder of how fragile full and robust health is, and also serves as an inspiration for those dedicated to improving the lives of those patients.

"They are very compelling," Plymale said of the demonstration videos,  "and, to be honest with you, were one of the visceral reasons why I took this job. It really is technology we have to get out there."

MyndMove's potential market just increased exponentially with recent 510(k) marketing clearance from the U.S. Food and Drug Administration. Plymale said MyndTec has already sent several units of the MyndMove system—which uses an eight-channel electrode array programmable with more than 30 protocols to specifically target muscles in the arm—to a partner institution in the U.S. for a pilot.

"Meanwhile, we have had lots of facilities reach out once they heard of the FDA clearance actively trying to get us to work with them both in terms of further research and also in the commercial setting," Plymale said.

The MyndMove technology, which received Health Canada approval for clinical use in 2014, is based on repeated stimulation of targeted muscles by the FES system (activated by a therapist who has asked a patient to try a specific movement, such as lifting a cup to the mouth or grasping a pen). The stimulation causes muscles to contract and the movement sends a signal from the muscle to the brain.

Based on the concept of neuroplasticity, this coordinated effort trains a new neural pathway that enables improvement and recovery of voluntary movement. The technology was born nearly a decade ago in the research lab of Milos Popovic at the University of Toronto; it is just one example of cutting-edge technology aiding stroke patients, plus some with spinal cord and traumatic brain injuries, to regain more normal function in everyday movements.

From Battlefield To Rehab

While MyndMove aims to improve arm and hand function, another emerging, early-stage technology, is attempting to help stroke patients regain a more natural walking gait. The technology, a soft "exosuit" from Marlborough, Mass.-based ReWalk Robotics, will be entering pre-clinical trials early in 2018.

The exosuit is the product of a collaborative agreement between ReWalk and Harvard University's Wyss Institute for Biologically Inspired Engineering, and a salient example of how publicly-funded research for one idea can be re-purposed in other areas. The exosuit research began in 2012 as a Defense Advanced Research Projects Agency (DARPA) project intended for the battlefield.

"We started to call it the exosuit because there is no rigid component," Kathleen O’Donnell, the program lead for Wyss Institute's medical exosuit program, said. "It does not restrict movement like an exoskeleton might. The first suits were developed to help able-bodied soldiers carry heavy loads and walk long distances. The purpose was to reduce the metabolic burden on them. They often carry 100 or more pounds of equipment on long marches and the goal was to make them less fatigued when they got to their destination.

"About a year or so into that program, we started looking at where we could find more medical applications of this same technology. We talked to clinicians in the Boston area, and it seemed like stroke was a really good application area that could benefit from this type of technology. The reason for that is that a stroke patient who could benefit from this has some residual walking capacity – it's not somebody who requires total support in order to walk, but they need a little help in learning how to walk better."

The exosuit is powered by a motor unit worn on a waist belt, which activates sheathed Bowden cables anchored in two spots: one in a calf-worn fabric sleeve and one in the insole of the shoe the unit is activating to achieve a more natural gait.

ReWalk already markets a rigid exoskeleton for people who have suffered a spinal cord injury who are unable to walk unassisted, and O'Donnell said the exosuit collaboration is meant for a different market—"with the exosuit we're taking somebody with some underlying ability to walk and we are injecting small levels of assistance at critical times in their gait cycle to improve their walking ability and coordination rather than taking over for them."

ReWalk CEO Larry Jasinski said the upcoming trial is not expected to enroll a large number of patients – comparable trials have consisted of 40 patients or so – and also said the trial is in the middle of IRB approval at four top research institutions nationwide.

Jasinski said the Wyss Institute researchers had shown the device worked, but didn't have a product that would meet commercial requirements.

"It could not have gotten past the FDA, would not have been durable enough for a rehab lab and use by 100 patients, and it wasn't really designed for home use," he said. "And that's why this relationship is so ideal. They are doing a high level of fundamental research that, generally, small companies can not afford to do. They are making it work for that individual situation. We are going to be able to take it through the FDA, through the reimbursement processes, and manufacture it at a price point with the quality control and functional level that can meet a mass audience. That is why it's a good marriage."