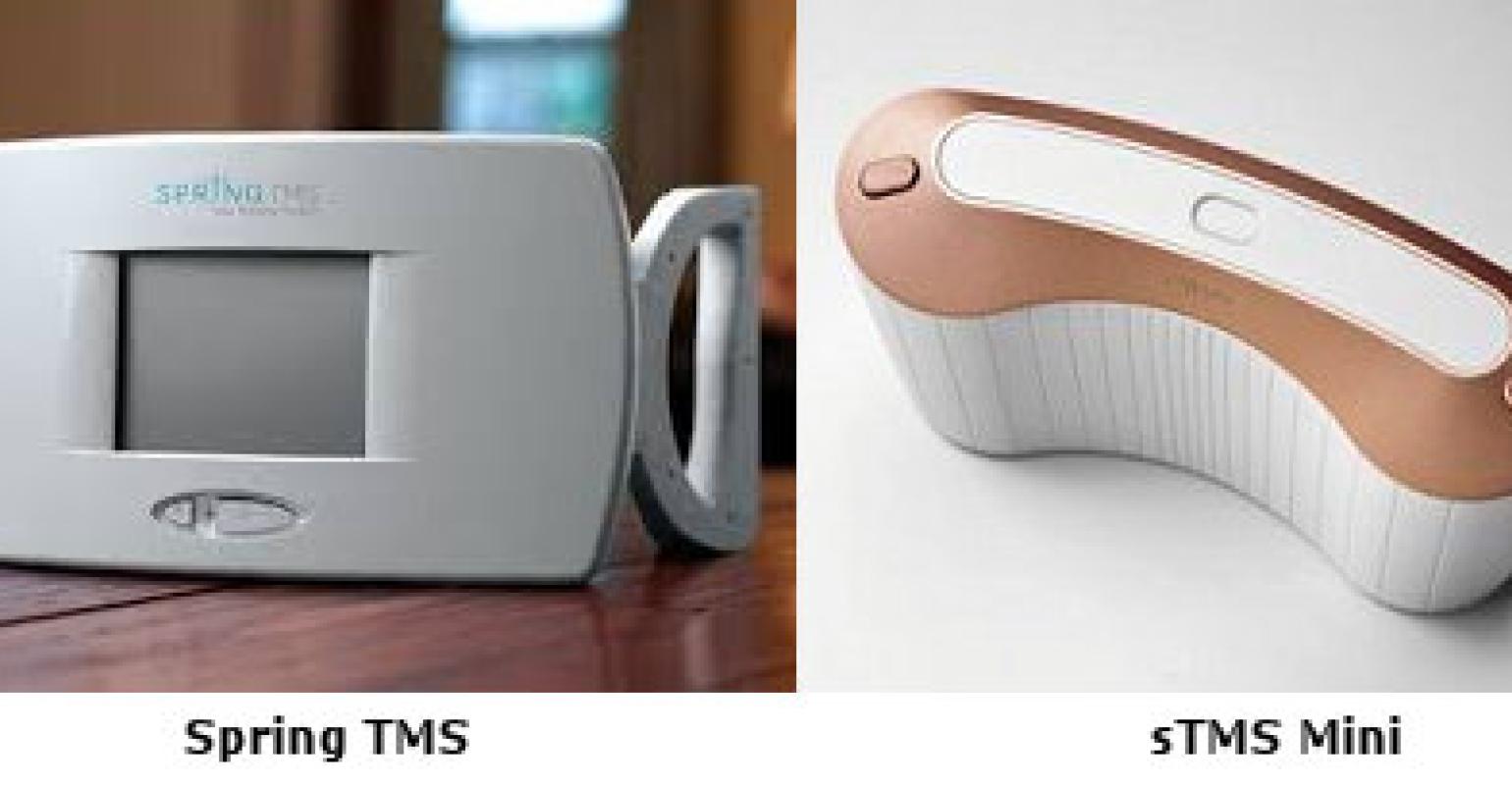 eNeura makes teh SpringTMS and sTMS mini devices for migraine treatment.
Companies that have developed devices for treating migraine headaches hope to make inroads into a market dominated by pharmaceuticals.

Migraine headache sufferers, particularly those who suffer from multiple debilitating episodes per month, can now ask their physicians about versatile non-pharmaceutical, non-invasive treatment devices that can both prevent migraines and lessen the severity of acute attacks.

FDA has granted within the past few months expanded use clearance for two devices that work on the principle of neuromodulation. Interestingly enough, one of the devices, manufactured by Belgium-based Cefaly, had been cleared in 2014 for migraine prevention and was granted expanded approval for acute migraine treatment in November; the other, the SpringTMS device, manufactured by Baltimore-based eNeura, had been approved for acute treatment, also in 2014, and was granted expanded approval for preventive use in September.

Both devices are presently available via prescription only.

The chief executives of both companies believe the time is right to make inroads into a market dominated by pharmaceuticals.

"Drugs work great for some patients, especially for those who don't have very frequent headaches," said David Rosen, CEO of eNeura. "But when you start to move over to the patients who need both an acute treatment and a preventative, the drug treatments begin to fall down for a couple reasons; one, because taking a lot of medications isn't good for you, no matter what. These drugs have some pretty significant side effects, and when you start to mix them, they have even more side effects. No one drug can both prevent and treat migraine, so you end up having to take multiple medications."

Cefaly CEO Pierre Rigaux, MD, said the company is in the “very beginning” of its market push in the United States. It sells about 1,200 units of its device per month nationwide, with a current prescribing base of about 350 neurologists and headache specialists. The company, with a U.S. office in Wilton, CT, has a national sales manager, five regional sales managers, and several independent representatives. Rigaux said Cefaly plans to double its global sales force and grow sales by 50% in 2018.

eNeura's Rosen said he expects neuromodulation will eventually become a well-known treatment modality for migraine, though its time has not quite arrived yet.

"People today, particularly patients, but also doctors to a certain extent, just aren't aware there is an alternative to a triptan or to a preventative like topiramate in order to manage their headaches," he said. "We find when the doctors are informed or the patients are informed and they ask their doctor for the TMS device, the doctors are more than happy to prescribe the device and the patients are really relieved the doctor is willing to prescribe something other than a medication."

Treatment from Front to Back

The devices work to alter neurological signals in different ways on different areas of the brain. The Cefaly device, which can be purchased in single-mode preventive or acute forms or in dual form, is classified as a transcutaneous electrical nerve stimulation (TENS) device. It attaches magnetically to an electrode on the forehead and sends electrical signals along the trigeminal nerve, increasing the number of well-being inducing endorphins and stimulating the touch sensitivity fibers of the nerve at high frequency, partially blocking the entry of pain into the nervous system.

The eNeura sTMS mini device, which resembles a contoured small stereo speaker and weighs slightly more than three pounds, works via magnetic pulse when held to the back of the head. The TMS in the product's name stands for transcranial magnetic stimulation, in which current is passed through specially shaped electrical coils to generate that magnetic pulse.

"When the pulse hits your brain it turns back into current," Rosen said. "The pulse is only powerful for a couple inches. The current resulting can influence how quickly your neurons fire, and can slow down the hyperactive neurons in people with migraines. By slowing them down, we make the migraine go away."

Both devices have recommended duration of time and intensity or number of pulses to either prevent a migraine or combat an existing headache, but Rosen said like any other prescribed treatment, the judgment of physicians and their patients allows for flexibility. He said the fact there are no drug-induced side effects is a plus for neurostimulation.

Neither Rosen nor Rigaux bill their devices as a be-all, end-all treatment, but note numerous trials have attested to the devices' efficacy and say they can work as part of a comprehensive treatment plan agreed upon by a patient and their neurologist or headache specialist.

“Our focus right now is patients who need an alternative or addition to what they are doing with pharamcotherapy,” Rosen said. For example, he noted that migraine sufferers who might be prone to “rebound” headaches due to medication overuse might benefit from adding neuromodulation.

“We ran a small study in the United Kingdom a few years ago to look specifically at rebound headaches to see if they used TMS along with their medications we could demonstrate a reduction in the amount of medication use and in fact we could,” he said. “I think it's a real opportunity for people in desperate need for something to treat their headache and those who know it's probably not a good idea to take more medication—but they have the pain today."