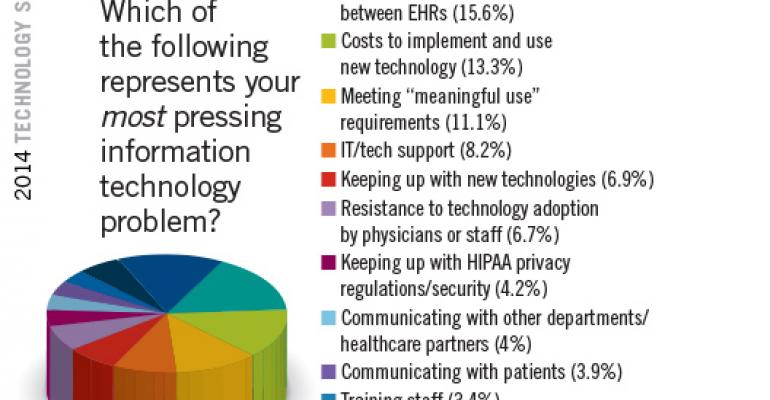 Implementing EHR was the top concern among the 1442 respondents. EHR adoption and implementation was the most pressing information technology (IT) problem for 16.8% of respondents. Lack of interoperability between EHRs was a close second at 15.6%. Roughly 47% of respondents said EHRs have made their practice's workflow more efficient overall, but an even higher number (59.5%) said they have not seen a return on investment as a result of implementing EHRs. However 64.9% said they were on their first EHR.
Among those who hadn't purchased an EHR, the majority (26.2%) cited the expense of implementation as being the reason why they had not. “It does seem, however, due to meaningful use incentive payments or other factors, that cost is becoming less of a concern, having dropped 4 percentage points from the 2013 survey,” the report says.
A 2013 survey by Accenture found that between 62 and 82% of patients globally would like some form of electronic access to their medical records. A significant number of patients would also like other telehealth services such as booking appointments and refilling prescriptions online and having secure email exchanges with providers. However 58.8% of those surveyed by Physicians Practice responded “No, not really” when asked if their practice considering using any telehealth technologies.
Physicians Practice is a part of UBM Medica a division of MD+DI's parent company UBM Canon. The full survey results and analysis are available at Physicians Practice.
[Image via Physicians Practice \ Kareo]
-Chris Wiltz, Associate Editor, MD+DI
[email protected]
TAGS: News
0 comments
Hide comments
Related