HomeProduct DevelopmentMaterialsDural Sealant Patch Made of Bioresorbable Polymers Earns CE Mark
Recent
Product Development
Has Medtech Shifted to a Seller's Strike?
May 20, 2022
Medtech in a Minute: The Industry Loses a Legend, and More
May 20, 2022
NeuroOne’s Bid for Long-term Use of Evo sEEG Shot Down by FDA
May 20, 2022
Minnetronix Improves Image Quality with Surgical Camera and Other Supplier News
May 19, 2022 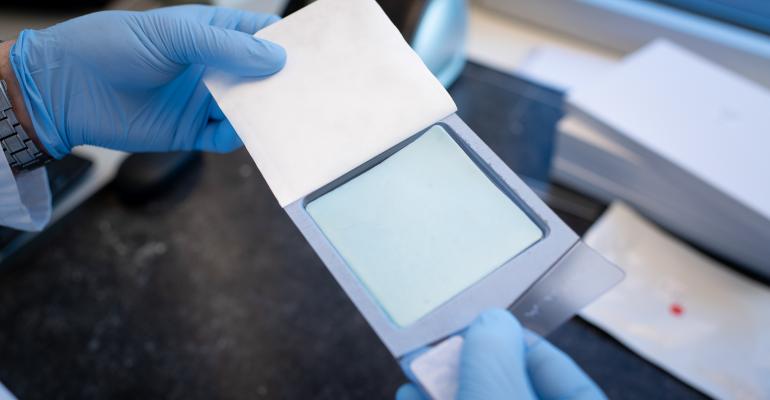 Liqoseal, a dural sealant patch made of bioresorbable polymers, has received the CE mark and is now commercially available in Europe. Developed by Polyganics, the patch could help reduce cerebrospinal fluid (CSF) leakage after elective cranial surgery.

Suturing has typically been used to close the dura mater, but achieving a watertight dural closure is difficult, he said. “The dura mater is the dense, leathery membrane covering and protecting the brain and spinal cord. This collagenous connective tissue consists of numerous collagen fibers, fibroblasts, and elastic fibers, arranged in a mostly parallel form,” he explained. “The dura is fragile, has minimal elasticity, and even the needle used to make the suture can create pinholes, causing leaks. Moreover, the dura is very prone to shrink during surgery due to dehydration.

“Depending on case-mix factors, such as location, patient age, indication, and radiation, it might be more difficult to obtain a watertight closure. Here, it can be impossible to achieve watertight closure by suturing alone,” Mareel continued. “Especially in the elderly, the dura can be paper thin and impossible to handle without causing damage. The dura behaves totally differently to other, better-perfused tissues, like muscle or fascia.”

Leaking CSF can gather under the skin, which could hamper wound healing and cause pain, he said. “Secondly, the CSF can leak through the skin wound, which [also] hampers normal wound healing. Most patients with CSF leakage necessarily face a prolonged hospital stay, antibiotic treatment for meningitis, external lumbar drainage, reoperation, or a combination of these measures. CSF leakage leads to significant patient burden and expense, with an estimated cost of 10,000 to 15,000 U.S. dollars per patient per leakage.”

For an alternative solution, Polyganics began developing Liqoseal in 2015 in close collaboration with the Brain Technology Institute (BTI), a consortium of internationally renowned institutes focusing on clinical and research aspects of neurosurgery, Mareelsaid. The company has also partnered with universities and centers of excellence.

To develop the two-layer dural sealant patch, Polyganics employed its proprietary synthetic bioresorbable polymers already marketed for tissue repair and regeneration. One layer consists an adhesive foam made of the bioresorbable co-polyester already used for the company’s Neurolac nerve guide, Neurocap nerve cap, and Vivosorb, along with a PEG adhesive component and a buffer salt. The second sealing layer is a sheet made from a blue-colored bioresorbable polyurethane, similar to that used in Polyganics’s Nasopore nasal dressing, as well as the same co-polyester as the foam.

“The other side of the product, the blue sealing layer, forms the watertight seal, which is intended to reduce CSF leakage),” he continued. “The blue colorant is added to clearly distinguish between the two sides of the product, so that the correct side [white layer] is placed on the dura.”

Polyganics has already analyzed 3-month data from the ENCASE I study, which shows that “all patients met the primary endpoint of no CSF leakage after a period of 3 months, strongly confirming watertight closure,” he said. “Additionally, no clinically significant swelling was observed, and no device related adverse events were reported. Safety endpoints will continue to be collected for a period of 12 months.” The protocol of the ENCASE study has been published in Neurosurgery.

Next up is ENCASE II, a randomized controlled trial. “Based on the results of the study, the company will submit the patch for pre-market approval to the US Food and Drug Administration,” he said. “Polyganics will also perform additional post-market clinical studies in order to obtain further long-term data on safety and effectiveness.”