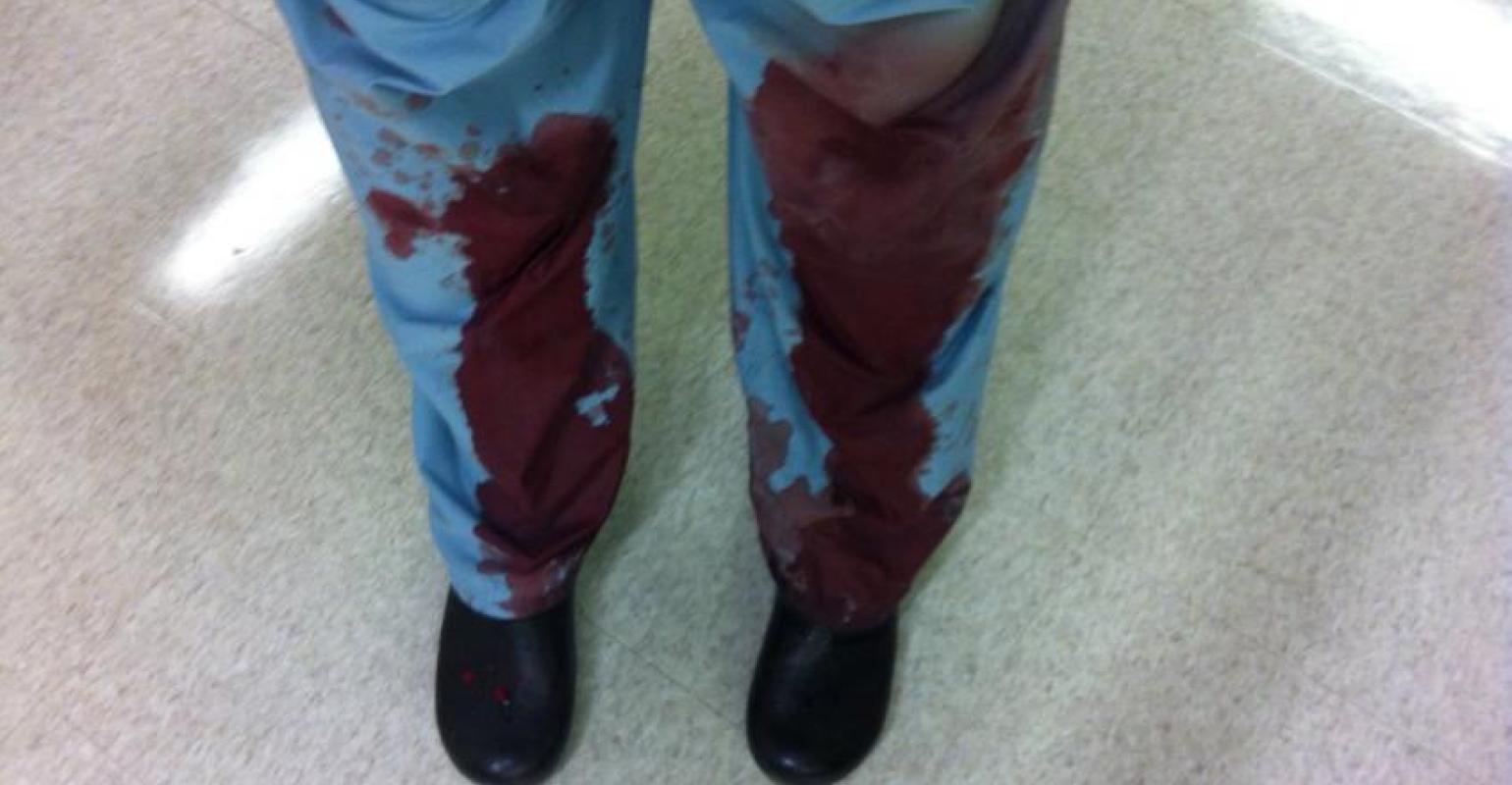 David Morris, MD
David Morris, MD, a trauma surgeon at Intermountain Medical Center in Murray, UT, shared this "selfie" on his personal Twitter account in response to the NRA's recent tweet telling doctors to "stay in their lane." Morris explained that he posted the photo of his bloody scrubs to show what staying in his lane looks like.

Trauma Surgeon: Enough America, This Should Be Everyone’s Lane

A video posted by the Twitter group This Is Our Lane after the recent mass shooting in El Paso, TX left many viewers outraged, while others pointed out that emergency medical professionals don't have the luxury of "looking away" from the human cost of gun violence. The group was created last year after the NRA told doctors to "stay in your lane."

A video tweeted by This Is Our Lane, a group that was born last year after the National Rifle Association (NRA) told doctors to stay in their lane, triggered an uproar while also reinforcing the point that trauma surgeons and first responders don't have the luxury of looking away from the horrific aftermath of gun violence.

Several people begged the group to take the video down, concerned that it glorified the events and the perpetrators. Others said that the public needs to see footage like this to understand what This Is Our Lane members face all too often:

"They don't have the luxury of not seeing these things, we do. We can look away, but we shouldn't. We need to understand," said a Twitter user who identified himself as Phil @FillipQuinn.

But the takehome message was clear:

"Enough America. This should be everyone's lane," Tweeted Robert Barraco, MD, a trauma surgeon and chief academic officer in Allentown, PA. He is affiliated with the Lehigh Valley Institute for Surgical Excellence.

The Twitter handle @ThisIsOurLane was created in response to this NRA editorial accompanied by the organization's tweet in November 2018 that said, "Someone should tell self-important anti-gun doctors to stay in their lane. Half of the articles in Annals of Internal Medicine are pushing for gun control. Most upsetting, however, the medical community seems to have consulted NO ONE but themselves."

In the days that followed, surgeons like David Morris, MD, a trauma surgeon at Intermountain Medical Center in Murray, UT, shared "selfies" on social media of their bloody scrubs (like the image above) to show the public why gun violence matters to them.

"If it hurts people or kills people it's ours," said Georges Benjamin, executive director of the American Public Health Association. "Firearms are the cause of injury and death and it's preventable. It's my lane. End of discussion."

This Is Our Lane now has 29.8 thousand followers on Twitter. 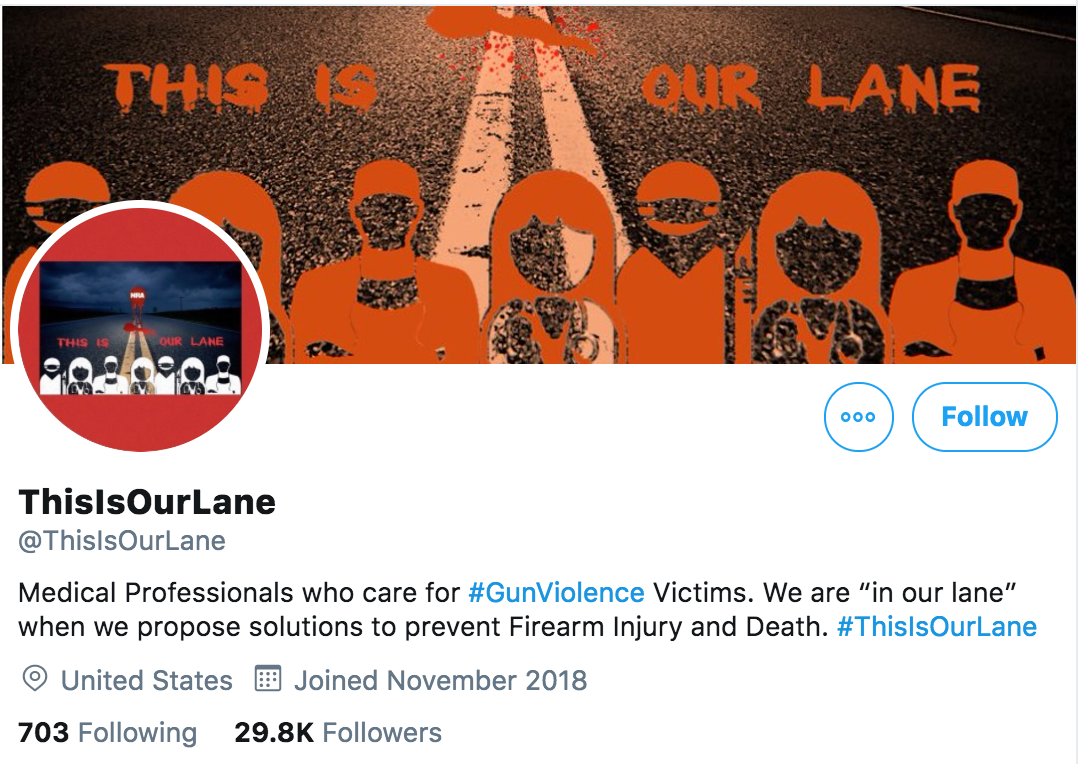 In February 2018, former Medtronic CEO Bill George spoke out on gun control and urged CEOs to take a stand on a local level to effect change, even at the risk of upsetting shareholders.

"I think CEOs can do a lot more locally in organizing coalitions among mayors, governors, state legislatures, and coalitions of business people and school boards to make something happen locally and really raise the level of support and protection in our schools," George said on CNBC's "Squawk on the Street."

When asked by co-anchor Carl Quintanilla if that needs to include putting space between your company and the NRA, George didn't miss a beat: "Absolutely it does."

The discussion came in the wake of the Feb. 14, 2018 mass shooting at a high school in Parkland, FL, which prompted more than a dozen companies, including hearing aid maker Starke Hearing Technologies, to cut ties with the NRA.

"It's really about our children," George said. "These are our employees' children. These are part of our company's families, and we want to make sure they're in a safe environment, otherwise, they're not going to come work for our company and live in our community."

Now that doctors are front and center in this debate, it's not unreasonable to ask if the medtech industry should take a stand, one way or the other, regarding NRA's "stay in your lane" comment. After all, the medical device industry relies heavily on those very same doctors for help with everything from R&D to the adoption of new products. Medical device companies need doctors, and right now those doctors could use some support on an issue that they clearly are very invested in.

Medtech Should Keep Out of Politics

If the reader comments on MD+DI's earlier story are any indication, however, a lot of people in the industry are of the opinion that medtech companies should stay out of social issues like gun control. Several of those comments appear below.

"Medtech ( including Bill George) serves the needs of all people regardless of political affiliations, and by delving into the political arena/gun control issue you will divide your customers and hurt your profession. Medtech should keep out of politics and specifically 'gun control' and rather than jump on the bandwagon of misrepresenting what the NRA actually stands for, do some research and educate yourselves."

"Surprising that a CEO is that short-sighted. Usually, a CEO would look at all the issues surrounding circumstances. In this case, there were many issues that allowed a mental patient access to a school. Sheriffs did not act, teachers did not act to prevent this kid from coming back into the school. School officials, as well as students, knew this kid was trouble and did nothing. Allow mental health to be searched in background checks. This is not allowed yet."

"I think companies that don't have direct involvement in gun manufacturing should NOT get involved. This is a horribly bad idea and a great way to lose business."

"The right thing is to support the NRA. There has never been a gun crime committed by an NRA member, much less a mass shooting. NRA supports our right to bears arms and do it safely. First thing leaders need to support is enforcement of laws that are already on the books but not enforced. Sandy Hook and this latest disaster were both [mentally] ill people with known problems that were ignored by law enforcement. That is the problem, fix this first."

"Medtech should do NOTHING about gun control!"

"The CEO is entitled to his opinion as a private citizen, but to speak out as the CEO of his corporation on this is totally inappropriate. Distancing his company from the NRA is not just severing the relationship of two companies, he is separating his company from 5 million members that are pissed off for being blamed for others' failures."

"There is an element in this country that has been working over our minds for years. They are trying to get us to view guns as evil and removing guns from society as the right thing to do. They try to shift focus off their own failed policies. In the scientific community when a new problem occurs one of the things we ask is, what changed? The guns they like to vilify have been around for over 50 years. They have only recently [been] used for these atrocities. Is the problem the weapon?"

"Legally, the C-suite acts in the interests of shareholders and nobody else, within the law. Morally, they should do what is right. Supporting guns in a civilized society, except for the military, law enforcement, hunting, and sport is just bizarre. An argument that starts 'I need a gun to defend from bad guys' is an admission that the society is not civilized. An argument that starts with the [second] amendment is logically flawed unless you are in a well-regulated militia (SCOTUS notwithstanding)."

"By offering discounts to NRA members, companies are currently giving their support to the organization and thus taking a political stance. Why should they do this? Would NRA members be happy if companies offered discounts to members of the Democratic Party or Greenpeace?"

Scroll to the bottom of this page to see additional comments on this ongoing debate.