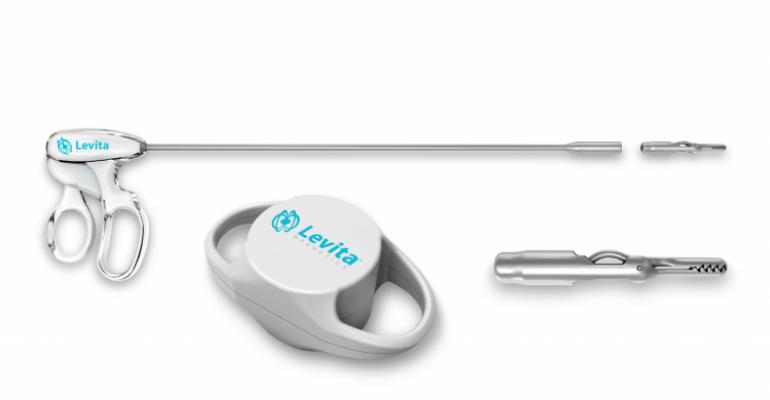 Image courtesy of Levita Magnetics
The first-of-its-kind system facilitates surgical exposure while decreasing the size and number of incisions in a variety of procedures, which can lead to enhanced patient outcomes.

A recent study concluded that a "first-of-its-kind" magnetic surgical system allows a safe, reproducible, incision-less technique for port-less intraabdominal mobilization. The Magnetic Surgical System, developed by Levita Magnetics, is so unlike current technologies that FDA had to create a whole new category for it when approving it for use, according to Alberto Rodriguez-Navarro, MD, CEO and founder of Levita Magnetics, in an interview with MD+DI.

The system consists of an external magnet placed on the skin that controls a shaftless detachable grasper. It enables surgeons to move instruments without the constraints of a fixed-position pivot point, while facilitating access and visualization of the surgical site.

In conventional laparoscopic procedures, shafted surgical instruments are introduced by fixed-position trocars inserted through incisions in the abdomen. Because they have a fixed pivot point, using these instruments can affect the surgeon’s vision by cluttering the operative field—they can also cause instrument collisions and restrict movement. Further, the use of trocars is also associated with risks relating to major bowel and vessel injury, incisional pain, bleeding, scarring, hernias, and infection.

With magnetic surgery, there are no limitations in moving the instruments. “That’s the beauty of magnetic surgery—that you are not restricted by the entry point,” Rodriguez-Navarro said. “That is a big advantage for the surgeon in terms of creating the right angle that you need for moving the tissues that you’re seeing while you are doing the surgery,” he continued.

“Using magnetic tools has enabled surgeons to reduce the number of incisions, and it enables surgeons to do movements that you cannot do with conventional instruments,” he said. This means the surgeon will be able to see better, which leads to a more efficient surgery, with less accidental damage to surrounding tissue, organs, or nerves.

“Multiple procedures are [currently] done with five incisions,” said Rodriguez-Navarro. Using magnetic surgery, he said “we are able to lower the number of incisions to four, three, or even just one incision,” adding that, in the end, that translates to less damage to organs and tissue during procedures. “We believe that also should impact in the overall recovery of the patients and their recovery should be faster.”

This is borne out in the study, which also evaluated the length of stay after bariatric surgery. It showed that when magnetic surgery was used, people spent less time recovering in the hospital. The data is preliminary but Rodriguez-Navarro sees a rationale behind it. “Because if you reduce pain, and also reduce damage to the organs, you have less inflammation, and that translates to feeling better after surgery,” he said.

To date, patients have undergone magnetic surgery at clinical centers including the Cleveland Clinic, UT Southwestern Medical Center, Stanford University, and Duke University, among others. Although the company is just beginning its rollout of the system, Rodriguez-Navarro says the feedback from clinicians has been outstanding.

“The system is now indicated for gall bladder and obesity procedures, and we are working actively on a prostate indication.” Other uses will likely follow, he said.