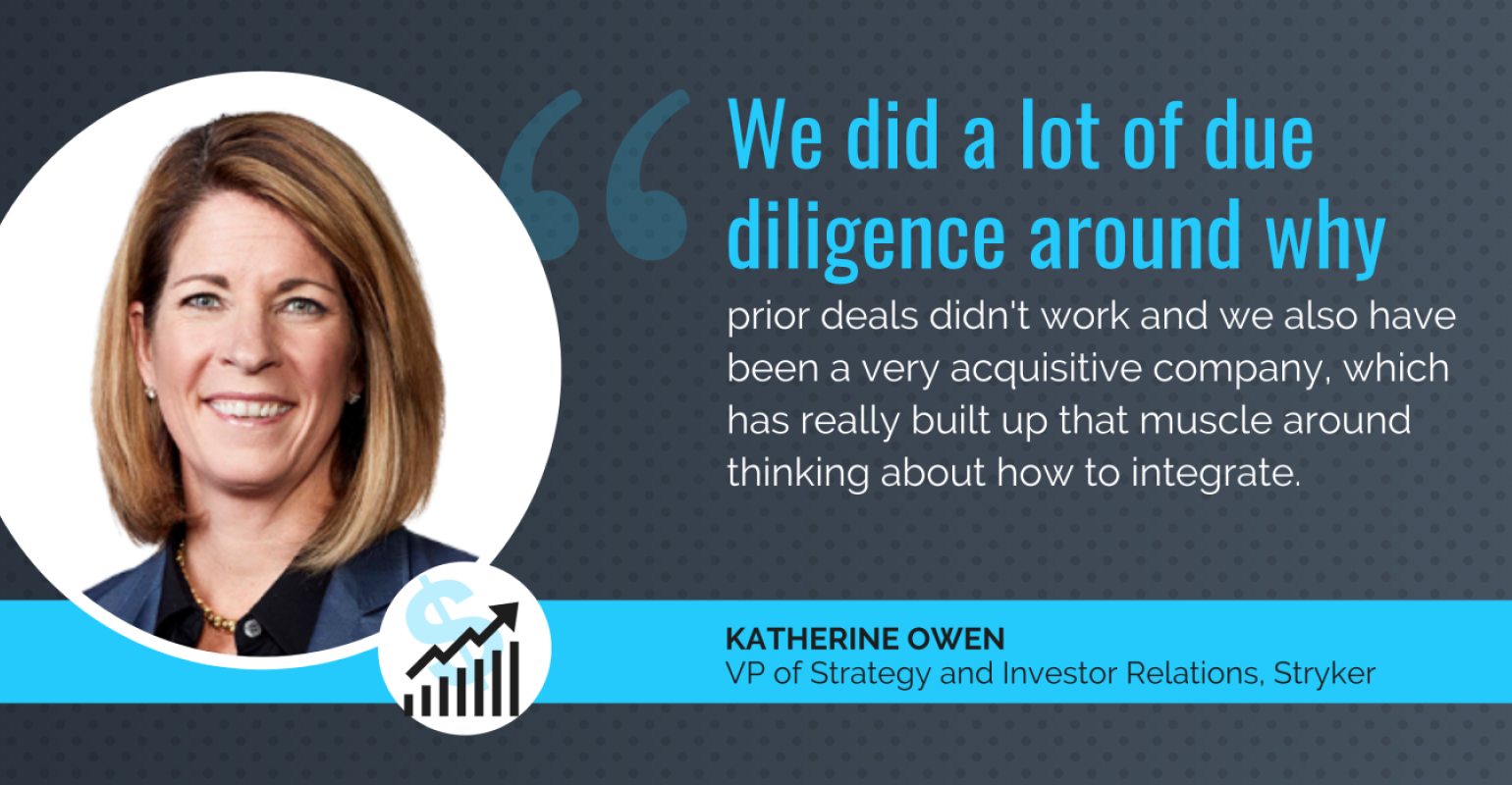 How to Keep a Big Integration on Track

During a recent earnings call, Stryker management shared some insight into what lessons the company has learned over the years that led to the successful integration of K2M.

MD+DI has covered a significant amount number of acquisitions over the past couple of years, but a big part of M&A – and one that is perhaps not talked about often enough – is integration. What happens after you close on that multimillion or multibillion deal?

It's a topic that came up during Stryker's second-quarter earnings call.

Kevin Lobo mentioned during the call that the company has made considerable progress in the integration of K2M,  and that Stryker is on track with its full-year growth target for the spine business.

That's great news for Stryker, but it's not always the way things go after a large acquisition.

"We've seen so many integrations go by the wayside and have issues early on," said Robbie Marcus, a J.P. Morgan analyst, during the Q&A portion of Stryker's call. "What is it exactly that you're doing differently? What have you learned that [has resulted in] this integration going according to plan?"

"We spent an enormous amount of time evaluating the market, the targets prior to making the decision to acquire K2M," Owen said. "We knew we had a strong cultural fit. We did a lot of due diligence around why prior deals didn't work, and we also have been a very acquisitive company, which has really built up that muscle around thinking about how to integrate. And we also are very comfortable with a hybrid sales model as opposed to some of the spine deals that forced a switch totally to direct."

But just because Stryker has learned how to make a big integration look easy, doesn't mean there wasn't work involved.

"There has been an enormous amount of work done by the organization in the first half of this year, a lot of integration efforts, but we're really pleased and as we said, we remain on target on track to hit our full-year growth targets in the mid-single digits for spine."

During previous earnings calls, Lobo has also touted the successful integration of other integrations, such as Entellus Medical, which closed in March 2018. That deal, valued at about $662 million ($24 a share) bolstered Stryker's presence in the ear, nose, and throat market. Lobo said M&A has become a core strength for the company in both identifying attractive targets and executing on deals after they have closed.

Another big medtech player with a lot of M&A experience is Boston Scientific, which went on quite the spending spree last year. While it seemed like the company was making deals much faster than many analysts expected, CEO Mike Mahoney assured analysts during an earnings call in July 2018 that many of the companies Boston Scientific has acquired recently were ones the company had previously invested in and had been tracking for multiple years. "So the companies that we're tracking we're very comfortable with."

Mahoney also said that the company has developed "excellent capabilities" to execute on the integration of these acquisitions and that the more mature companies that Boston Scientific has acquired in recent years are growing faster and driving more leverage in Boston Scientific's hands.

The topic of integration strategy also came up during Abbott's second-quarter earnings call, in response to an analyst's question about the recent news that Abbott has hired Lisa Earnhardt to run the company's medical devices segment. CEO Miles White explained that Abbott likes to have a fully integrated business, meaning the general manager (GM) of that business has responsibility for all things commercial in that business, as well as manufacturing, R&D, technical support, service, etc.

"We like all those functions reporting to one GM. So, we realigned St. Jude. We did the same with Alere, quite frankly, when we took them over," White said. "And so, each of the businesses has a fully integrated general management responsibility, and that was a transition. And Robert [Ford] led that. It's all in place. That meant that we added a number of experienced general managers, we replaced some who had left us as part of the St. Jude or earlier acquisitions and so forth. So, we went through a management transition."

MD+DI published an article last year in which the author emphasized the importance of considering market access as part of any M&A due diligence.

"Failure to assess market access risk in due diligence can result in post-M&A surprises, particularly if additional evidence and infrastructure needs were not factored into deal valuation," Rob Wenthold wrote. "In short, the market access function is vital for any company that is strategically emphasizing inorganic growth."

"Due diligence is, of course, critical to informing a company’s go/no-go decision, but too often, market access is considered a secondary issue in the process. In fact, given ever-increasing demand for evidence that goes beyond regulatory requirements for medical devices, market access should be an essential part of due diligence," according to Wenthold. "Market leaders are deploying market access analysis upstream, in landscape assessment, target prioritization, and throughout the in-depth diligence review."