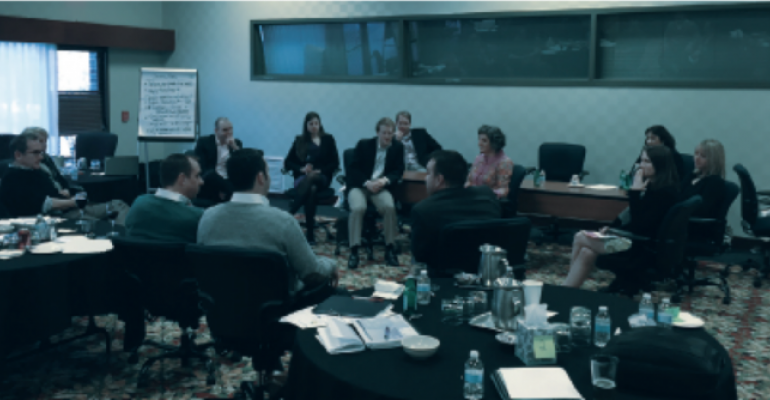 The combined Orion core team after another multi-day milestone meeting.
What does it take to drive innovation in a corporate environment, particularly when the project team itself is comprised of more than 100 people?

The constellation Orion contains two of the universe’s brightest stars. It is located on the celestial equator and can be seen from anywhere in the world. As such, Orion has served as a guide for generations of navigators. It’s fitting that Abbott Point of Care gave the name Orion to a global pricing and messaging initiative with the intention of the project being as recognizable and important to the organization as the constellation is to the night sky.

Abbott Point of Care is the market leader in “with-patient” point-of-care lab testing devices. Its i-STAT system is a small, handheld device that can deliver a range of laboratory results in minutes with just a few drops of blood. In 2014, the company recognized that the accelerating pace of change in the healthcare industry meant it needed to re-examine its U.S.-centric pricing, messaging, and value proposition. This required new thinking and a different problem-solving approach. Abbott Diagnostics made a bold decision to hire not one, but three, consulting partners, each in a different city, to define the problem, approach and responsibilities. This is the story of how three consultants worked hand-in-hand and shoulder-to-shoulder over 16 months to challenge the status quo, deliver a long-term growth strategy for a shared client, and not only not kill each other, but become close allies and friends.

Hear Marlisa Kopenski's case study on using project frameworks to create order out of chaos at the BIOMEDevice San Jose conference on December 6, 2017. Use promo code "MDDI" for free expo access and 20% off conference registration—or win a free pass here.

What does it take to drive innovation in a corporate environment, particularly when the project team itself is 100+ people? And the core leadership team is six people? How does a team not get bogged down by the corporation or by each other?

The answer can be boiled down to three things:

Rigor and flexibility sound like two mutually exclusive attributes, but they are not. When wrangling a large team, rigor means knowing who is responsible for what and when. Abbott Point of Care designated a program manager, responsible for the ultimate deliverable of the project. I was assigned the role of project manager, which meant I was responsible for making sure all the consultants were doing what needed to be done. We had a standing weekly meeting with a standard agenda, an agreed-upon reporting template, and a robust SharePoint site where all deliverables were posted. We divided the project into three phases and scheduled all major milestone meetings for the first phase at the project launch meeting. In many ways, these processes are just best practices for large projects.

A secret to success was also flexibility. When the budgeting cycle required that the majority of our research travel be completed before the end of the calendar year, teams were in Asia within three weeks. When planning glitches delayed travel to four other continents, teams did not go pencils-down on the effort. One team asked for permission to further examine an observation from the early field research through the production of a Pecha Kucha—a presentation style that forces creators to consider only the essence of an idea. By reframing a disappointing delay into an opportunity to think deeply and differently, two foundational insights were created. The team observed that the i-STAT system was a “complex, easy-to-use device” and challenged the idea of “handheld” by positing that “portable” might be the more accurate description. The ultimate Orion strategy would have been very different if the team hadn’t been flexible enough to take a different tact when original plans stalled.

The easy steps of operating an i-STAT are made more complex by external factors such as environment, situations and personal preferences (actions).

For a large team to stay aligned over the course of a long, complicated project, the members must learn from and with each other. In the case of Orion, it was important that everyone level-set on what the i-STAT device was and how it worked. We asked an Abbott Point of Care field training specialist to host an in-service to train our team, just like a nurse or doctor would be trained in a hospital or clinic. It was eye-opening. Even the Abbott Point of Care team members understood first-hand the precision and skill involved in filling a cartridge with only a few drops of blood.

This exercise was an empathy-building warm-up for the user-centered research approach Orion undertook in the course of interviewing more than 150 people in six different countries. Without a budget to send everyone everywhere, we decided on two different methodologies that would overlap. One team spent time in the field observing and interviewing i-STAT users. Another team gathered information from executives and decision-makers. The efforts overlapped in their interaction with influencers, who had both a business and patient care perspective. It was very important to the team to balance what we heard from the three groups. We hosted “co-analysis” sessions at the end of research where everyone came together to essentially “unpack their bags”—show raw video, flip through their notes, and share stories and photos. Making time for authentic sharing—not curated stories or formed opinions—allowed the team to share, probe, and challenge. Our common thinking evolved as new data came in. Everyone on the team learning together and collaborating on a shared point of view was amazing for two reasons. First, the trust on the team was incredible. Second, the foundation for each team’s recommendations was rooted in a shared understanding of the problem, resulting in final deliverables that were integrated at their very core.

One of the strains on big projects are bloated meetings that happen either too frequently or not frequently enough. The Orion team made a conscious decision to “play by the rules” with large share-out meetings for stakeholders and leadership every six weeks. These were typically two-day meetings with 17 consultants and up to 50 Abbott stakeholders. There is no getting around the fact that best practice in huge corporations is sharing in this way. We looked at these meetings almost as theatre—a little wooing, some gauging of the audience, and, ideally, loud applause, which translated to permission to proceed. The real work, like in real theatre, took place behind the scenes. Besides our “co-analysis sessions” we also held “co-synthesis” sessions, where we previewed and pressure tested our deliverables with each other. This is definitely not a best practice in large corporations or, especially, among consultants, who are often better at guarding their territory than letting their guards down.

A very unconventional approach was our ad hoc “Beer Summits.” While there was actually no beer served (until we adjourned, of course), a Beer Summit was called when it seemed appropriate for the four main team leaders to get us in a room together. Wearing our most casual clothes and showing up as our most honest and passionate selves, we would set the next course, right the course, or deviate drastically from the course we thought we would be traveling. At the start of the project, we were wise enough to know that we couldn’t plan every single meeting. However, we were naïve to think the finding calendar dates was going to be one of our bigger problems. Big, bold projects always wobble at some point. That is part of the learning. Beer Summits—because they were ad hoc, face-to-face and both strategic and tactical—allowed us to have the difficult conversations with each other, to flounder and be lost together. We also celebrated as a group when we made a breakthrough. Beer Summits were critical to the success of Project Orion.

In sum, so much of what made Project Orion successful was intentional human interaction. We did not let geography, time-zones, or corporate norms hinder us from getting together face-to-face to have essential discussions, and not necessarily the ones the project Gantt told us to have.

Project Orion ended in December of 2016 with the delivery of a new strategy for global pricing and messaging. But beyond that, the organization built empathy for the users of its “complex, easy-to-use-device” and cultivated a deeper understanding—even pride—in the value of the i-STAT system to patients and customers around the world. Seeing for ourselves how the device accelerates decision-making for patients and improves patient care in all types of care settings was very rewarding. In the end, Orion was a spot-on name for this project. It did serve as a guide for Abbott Point of Care. It continues to shine brightly within the organization, beyond just the i-STAT team. And for those of us who contributed, the project was a career highlight and a source of great personal satisfaction.