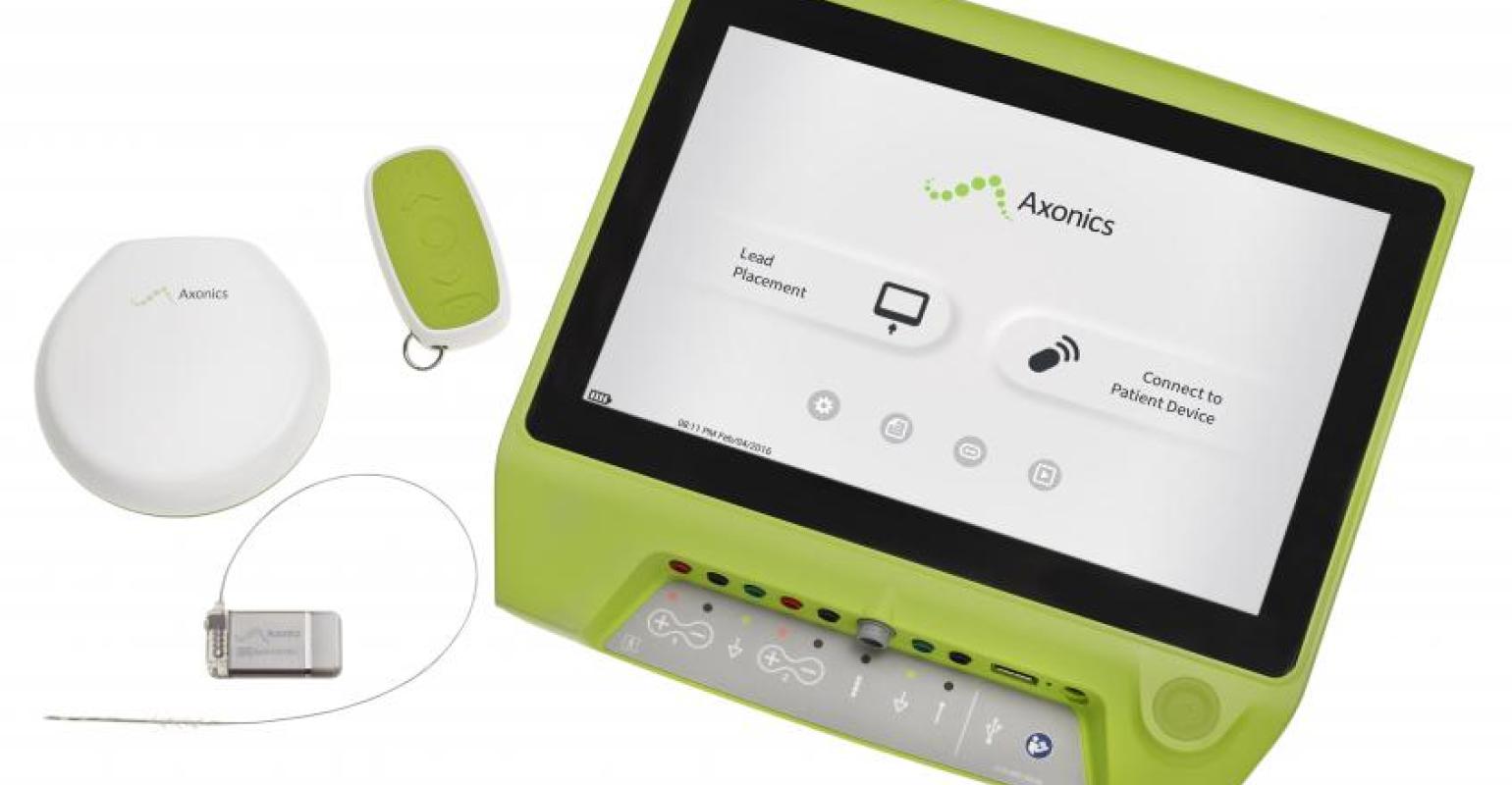 Axonics' implantable rechargeable sacral neuromodulation device is now FDA-approved for the treatment of fecal incontinence, overactive bladder, and urinary retention.
Axonics does not appear intimidated by a patent lawsuit from the big guys.

For 22 years, the world's largest pure-play medical device company was the only player in sacral neuromodulation, a space that addresses urinary problems as well as fecal incontinence. Now there's a new kid on the block, which has created quite an intense David vs. Goliath medtech story.

For those unfamiliar with the Axonics vs. Medtronic story up to this point, click here for a quick rundown of recent events that have transpired in this market.

FDA approved the urinary indications for an implantable rechargeable sacral neuromodulation (r-SNM) device developed by Axonics Modulation Technologies. The Irvine, CA-based company won FDA approval in September to market the device for the treatment of fecal incontinence. This second approval means the company can also market the device for urinary urge incontinence, urinary urge frequency, as well as underactive bladder or urinary retention. Both approvals also cover the claim of a 15-year functional life and the ability of patients to undergo full-body MRI scans without the necessity of having the device explanted.

The device competes directly with Medtronic's InterStim II device, which has been the standard of care and used to treat more than 300,000 patients, according to Medtronic.

Medtronic dropped a big announcement in October that it had filed a pre-market approval (PMA) supplement with FDA for its InterStim Micro neurostimulator as well as its InterStim SureScan MRI leads. Like Axonics' system, the InterStim Micro is a rechargeable, implantable sacral neuromodulation device designed to treat patients affected by overactive bladder, urinary urge incontinence, unobstructed urinary retention, and fecal incontinence. The SureScan leads, which will be used in future implants of the recharge-free InterStim II system and rechargeable InterStim Micro system, are designed to provide full-body 1.5 and 3 Tesla MRI conditional labeling, pending FDA approval.

Medtronic anticipates having FDA approval for the newer device as early as March 2020.

"Medtronic believes competition drives innovation and broader market awareness, which is good for the industry and for patients, and we welcome competitors who play by the rules and existing laws," Medtronic said in a statement e-mailed to MD+DI on Thursday. "Also, we are committed to protecting our proprietary technology and intellectual property, which drives our continued innovation."

"We believe the claims are without merit and an attempt to suppress competition by confusing physician implanters with scare tactics," Cohen said. "This highly scripted event is having the opposite effect in the market and physicians have openly expressed dismay that instead of investing money to bring attention to the benefits of sacral neuromodulation therapy, the incumbent would rather spend its money harassing a new and innovative entrant."

Cohen said Axonics has invested "substantial" time and resources to understanding the sacral neuromodulation competitive landscape  since the company's inception in October 2013, and "we have been very careful to respect the intellectual property rights of all others in the design of our products."

So What's Changed on the Competitive Front?

Piper Jaffray Analyst Adam Maeder pointed out during Axonics' earnings call, Cohen's commentary on the company's previous earnings call indicated that Axonics had not yet seen much of a competitive response from Medtronic. That's obviously no longer the case, so, Maeder wanted to know, what's changed?

"Well, what's changed is that clearly we’ve gotten under the skin of the folks in Minneapolis, right, and they have decided that they’re going to put out a news release about a new product that they’re going to get approved in record time with the FDA and then they decided to file what we think is a frivolous lawsuit against us," Cohen said. "So it's clear from a corporate standpoint that we’ve got their attention and they don't want to, let's say, give up this monopoly easily."

But it doesn't have to be this way, he said.

"We are happy to compete on a fair basis in the field with honesty and integrity and we would invite the people from Medtronic to do the same," Cohen said.

Axonics recent hosted a series of four Saturday seminars in different U.S. cities for physicians (about 273 attended each) and analysts to learn more about the Axonics device from the physicians who served as investigators in the company's pivotal study. In response to overflow demand for these symposiums, the company is planning another program in Atlanta, GA that has about 50 additional physicians currently registered. That level of engagement from physicians reinforces Axonics' confidence in the product demand.

"You don't get 325 physicians to take a Saturday out of their life to come in and learn about your product unless there is significant interest in that product," he said.

Needham & Co. Analyst Mike Matson was among the medtech analysts who attended one of the Axonics seminars.

According to Matson's most recent report on Axonics, the company is already seeing share gains and market expansion in Europe, Canada, and the United States.

"In the U.S., [Axonics] is beginning to take market share and management emphasized that they expect the company's launch to also drive meaningful market expansion given its differentiated technology," Matson noted.

Based on management commentary, Matson said the SNM market could double in the next three to five years.

Axonics is not resting on its laurels either, Cohen told investors during the earnings call. The company has new sacral neuromodulation products in development, including a second-generation implantable pulse generator that extends the time between recharging intervals to once a month and a non-rechargeable primary cell device. The CEO said Axonics anticipates having these products available in the United States during 2020 and 2021, respectively.