The Moment We've All Been Waiting For: J&J's Surgical Robotics Platform Reveal 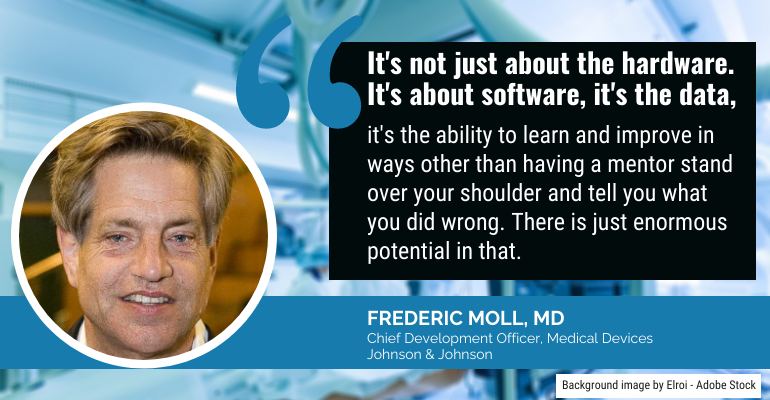 J&J has tapped an all-star team to develop its general surgical robotics platform, Ottava, which the company unveiled Thursday.

We had to wait a tad longer than initially anticipated, but the moment for Johnson & Johnson's big surgical robotics reveal has arrived. And who better to help reveal the new robot than the man who pioneered the surgical robotics field — Frederic Moll, MD.

"I'm especially excited about the general surgery robotic platform that we're going to introduce, and what's hot off the presses there is we actually have a name for the system. Its name is Ottava, and you're one of the first outsiders to know that," Moll told MD+DI in an interview ahead of a virtual medical devices update meeting J&J hosted Thursday morning for the investment community.

"Yes, it's later than we expected," Ashley McEvoy, executive vice president and worldwide chairman of medical devices at Johnson & Johnson, told MD+DI. "...We believe that we're still in the early innings of digital surgery, there's very low penetration globally, and we need to ensure that we have a highly differentiated offering in our general surgery offering [in robotics]."

"And that's really what we're playing for, and we think that this is kind of a multi-decade growth strategy, not just the next couple of years," she said. “...And quite frankly, I wanted to ensure that we had the world's best experts working on this."

What's behind the name?

Ottava comes from the musical term octava, which basically means an octave above.

"We think that name and the meaning behind it sort of reflects what we're trying to accomplish with this robotic platform, really taking robotics to a new level," he said.

"That tries to describe not only the ability to build a machine that helps clinicians accomplish a procedure, but give information guidance, and sometimes automation to certain parts of a procedure that technology can be smart enough to understand clinically what the clinician is trying to accomplish, and be a smart assistant," Moll said.

That distinguishes the Ottava system from current surgical robotics technology designed to have a surgeon sitting at a console.

"The idea of an ecosystem that includes connectivity, and data, and AI, and all those things everybody loves to talk about is really the ability to go beyond the hardware and use software and the data [gained] from procedures in order to not only make it easier for the clinician, but to attempt to give the clinician the ability to improve and have as good an outcome as possible with his or her level of experience, level of technical capability."

What excites Moll the most about where surgical robotics is today?

As the story goes, Moll's roll in the surgical robotics field was not driven by a desire to use a robot in the operating room so much as his desire to make surgery less invasive. When he saw early designs of surgical robots, he became convinced they could help accomplish that goal. In 1994, he pitched the business plan that became Intuitive Surgical to his then-employer, Guidant, but the company rejected it. A year later, Moll rounded up investors and struck out on his own.

"I was just trying to solve some of the problems of manual minimally invasive surgical technique when I got involved in robotics, and from there it's been an amazing journey," Moll said. "But you know, when I talk about robotic surgery, my tagline is: robotic surgery, just getting started."

And it's clear from speaking with Moll that he truly believes that.

"What I think is most exciting about this phase of robotic surgery is it's not just about the hardware," Moll said. "It's the software, it's the data, it's the ability to learn and improve in ways other than having a mentor stand over your shoulder and tell you what you did wrong. There is just enormous potential in that."

The other exciting part of it, which Moll says is equally significant, is the expansion of robotics into places where it does not exist today.

"One of the key features of the technology that we're bringing forward with Ottava is, like the da Vinci, it does pelvic surgery, abdominal surgery, chest surgery ... unlike da Vinci it really has the ability to extend into what I would call more interventional or endoluminal technique," Moll said. "Things like endoscopy, vascular intervention, and together with our orthopedic partners, play a role in types of orthopedic and open surgery that have not seen robotics in the way that they're going to."

In other words, we can expect to see significant broadening of the use of surgical robotics. As Moll said, he started out in this field primarily to solve mechanical problems such as how to get back the wrist and digit movement of a human hand and fingers while they are inside a patient's body. But as an industry, companies working in the field are just at the beginning of a much longer journey. 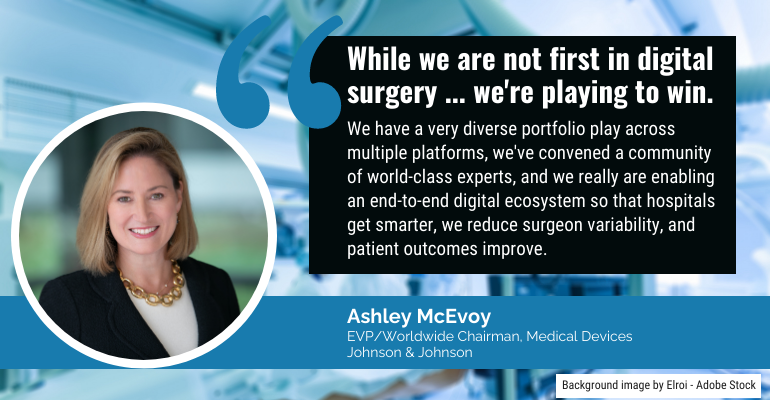 Given what we now know of J&J's plans in the space, it's no wonder CEO Alex Gorsky said at the beginning of the year that surgical robotics would be a driving force behind the company's medical devices unit.

The New Brunswick, NJ-based company found a nice entry point to compete in surgical robotics through its Verb joint venture with Verily Life Sciences. However, in 2019 J&J took the next big step by buying out Verily’s interest in Verb. This acquisition was perhaps the grand finale of a year’s worth of deals and moves J&J put in place to further enhance its surgical robotics technology. And let us not forget the company's $3.4 billion acquisition of Auris Health, one of medtech's largest deals of 2019.

"While we are not first in digital surgery ... we absolutely think we're playing to win," McEvoy said during Thursday's investor event. "We have a very diverse portfolio play across multiple platforms, you can see we've convened a community of world-class experts, and as we've mentioned we really are enabling an end-to-end digital ecosystem so that hospitals get smarter, we reduce surgeon variability, and patient outcomes improve."

The Auris deal not only netted J&J the Monarch surgical robotics platform — currently used in bronchoscope-based diagnostic and therapeutic procedures — but also brought Moll into the fold.

"It's not just that we have a better mechanical tool and the robot itself makes it easier to use that tool," Moll said, using the Monarch system as an example of where the field is headed. "There's a whole lot of information that is not just additional interesting stuff, it's actually necessary to get from where you start — the opening through the trachea into the airways of the lung — and have enough intelligence, and data, and pattern recognition that you are able to get to where you're going."

Suffice is to say, these next-generation surgical robotics platforms will enable things that are extremely difficult to achieve today, if not impossible.

"I use the example of the Monarch system because it was not possible before Monarch to drive all the way to the periphery of the lung and see what you're doing and then have the ability to very precisely target lesions for biopsy of lung cancer," Moll said. "So the thing that's really specific to J&J in this opportunity is ... we can combine the knowledge base and capability across J&J — and by that I mean not only in the medical device sector but in pharma where you couple therapies that the pharma group would love to deliver but can't in a localized, controlled fashion." 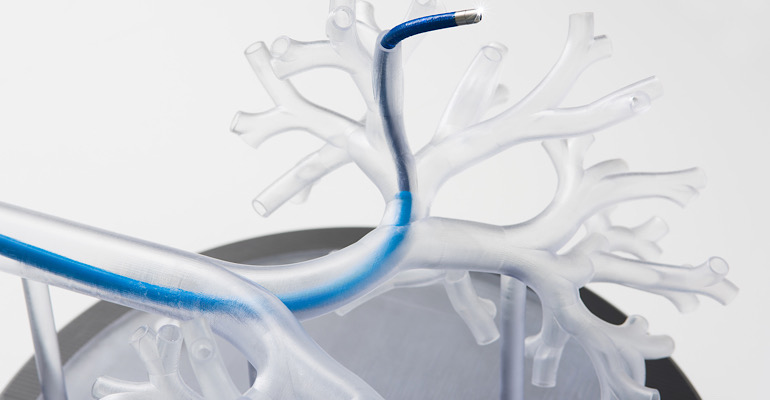 The image above shows the Monarch Bronchoscope System's scope coming out of a lung model.

The evolving perception of surgical robotics

The fact that these emerging surgical robotics technologies are creating more of a partnership between man and machine than ever before helps to dispel some of the myths and fears historically associated with bringing robots into the operating room.

"When I started in robotics most people were offended by the idea," Moll recalls.

In fact, he said, if it weren't for challenging minimally invasive procedures like a prostatectomy, the field probably wouldn't have taken off the way it did. It was a very foreign concept back then for the surgeon to rely on innovation beyond the traditional surgical tools. Those instruments weren't designed to be as intimately involved in the surgical technique the way robotics are.

"I've been at this for 25 years, so it's taken that long for clinicians to really embrace the technology, and understand that it is not against them, it's for them. It can make them better," Moll said. "And that's a lesson that I think was a hard one for a lot of clinicians, but I think most surgeons are over that."

An example of this progressive view of surgical robotics is a technology that J&J is rolling out with its robotics platforms called C-Sats.

"C-Sats actually takes videos that are submitted by the clinician, breaks them down into steps, grades those steps, and then gives feedback and essentially rates the quality of a procedure based on what the video showed and what the analysis said was either good technique or bad technique, and then suggest how to do things better," Moll said.

The fact that surgeons are actually open to and, perhaps, eager for that type of technology in the operating room is still somewhat of a surprise. After all, Moll says, when he first started in the industry there was a lot of resistance from surgeons to even having a video camera in the operating room recording a procedure.

"I think we've come a long ways from where we started with regard to understanding and accepting that technology can assist the clinicians, and even that surgery is a team sport to some degree," he said. "That's the future, where the robot really becomes a full partner to the clinician."