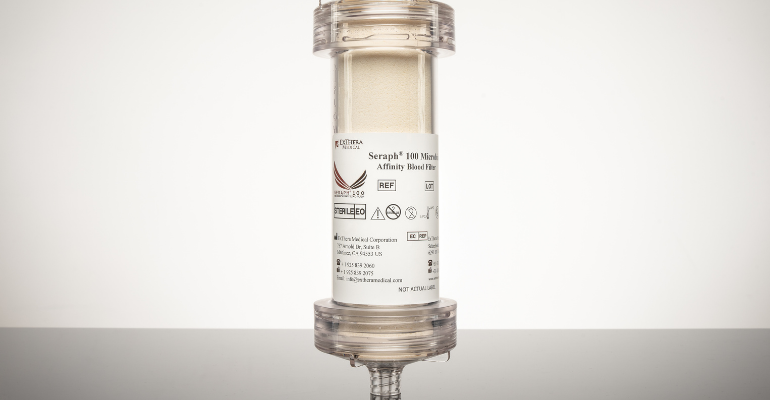 ExThera Medical's blood purification device brought a transformational treatment approach to the battle against severe COVID-19 cases. Can the device go beyond that narrow indication?

ExThera Medical's blood purification device helped to save lives during the COVID-19 pandemic. Now, the Martinez, CA-based company has FDA's blessing to conduct a multicenter study of the device for the treatment of critically ill patients with potentially fatal pathogen-associated shock, a form of septic shock.

The Seraph 100 Microbind Affinity Blood Filter is the first blood purification device to be shown to reduce both bacterial and viral loads in the bloodstream, according to ExThera. The new randomized control trial is part of the PURIFY program conducted in partnership with the Henry Jackson Foundation for the Advancement of Military Medicine and Uniformed Services University of the Health Sciences. The device has previously been tested in partnership with the Department of Defense and the Defense Advanced Research Projects Agency. About 15 U.S. sites have been recruited to participate in the study, including both community and military hospitals.

The functionality of the device is actually quite unique. As a patient's blood flows through the Seraph microbind affinity blood filter, it passes over microspheres coated with molecular receptor sites that can mimic the receptors on human cells that pathogens use to invade the body. Harmful substances are quickly captured and absorbed onto the surface where they can be removed from the bloodstream without adding anything to the blood, allowing the blood to flow back into the patient with all healthy blood cells intact.

“The innovations behind the Seraph 100 has brought a transformational treatment approach to the battle against severe COVID-19 cases in the United States. We are confident we can take the device beyond that narrow indication,” said Lakhmir Chawla, MD, chair of ExThera's scientific advisory board. “The data behind the Seraph 100 is promising and we look forward to the opportunity to prove that the device can be effective in saving the lives of many more patients suffering from a wide variety of bloodstream infections.”

The new study comes on the heels of preliminary observational data from PURIFY-OBS – the multicenter observational study of the Seraph 100 – showing very significant improvement in survival rates among critically-ill COVID-19 patients treated with the Seraph 100. The filter is currently available in the United States for the treatment of COVID-19 through an emergency use authorization, and in CE mark countries for the reduction of bloodborne pathogens during bloodstream infections.

ExThera's Seraph 100 was one of several device innovations that was brought to the front lines early on in the pandemic.

But the Seraph 100 has been getting noticed since well before the spread of COVID-19. Back in 2017, FDA fast-tracked the technology as an adjunctive treatment for bacteremia, in addition to antibiotics, for patients receiving hemodialysis when the source of the infection is heparin-binding bacteria.

ExThera applied for the EAP designation in June, and the company said FDA granted the designation within an accelerated timeframe. The company said its technology differs from other blood filter systems in that it is designed to remove a variety of different pathogens simultaneously by using a blood-contacting surface which does not harm the blood.