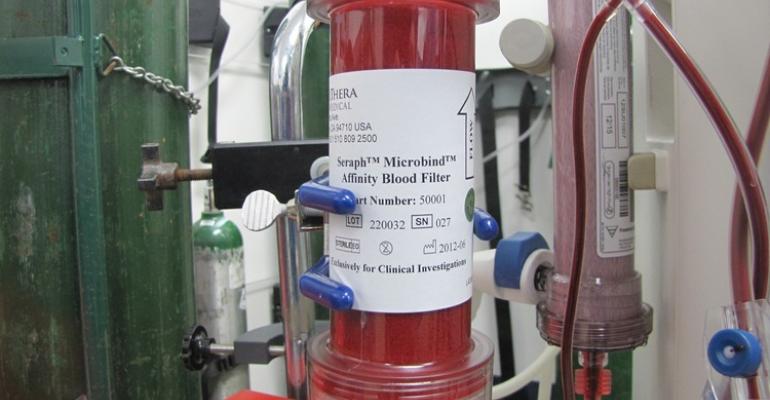 ExThera Medical, a developer of blood filtration systems and biotechnologies, has received Expedited Access Pathway (EAP) designation from FDA for its latest technology, the Seraph 100 blood filter. The EAP designation indicates that the use for the technology will be an adjunctive treatment for bacteremia, in addition to antibiotics for patients receiving hemodialysis when the source of the infection is heparin-binding bacteria.

ExThera applied for the EAP designation in June, and the company said FDA granted the designation within an accelerated timeframe. The company said its technology differs from other blood filter systems by removing a variety of different pathogens simultaneously by using a blood-contacting surface which does not harm the blood.

"It has been said that 'speed is life' in the effective treatment of bloodstream infections," Ward said. "Seraph can potentially save thousands of lives now lost to infection for which there are no available drugs."

The functionality of the device is actually quite unique. As a patient's blood flows through the Seraph microbind affinity blood filter, it passes over microspheres coated with molecular receptor sites that can mimic the receptors on human cells that pathogens use to invade the body. Harmful substances are quickly captured and absorbed onto the surface where they can be removed from the bloodstream without adding anything to the blood, allowing the blood to flow back into the patient with all healthy blood cells intact.

The company said the technology can even be configured with optional supplemental absorbents to remove other toxins or evolved pathogens. Researchers were able to showcase this by adding endotoxin binding to Seraph 100, making the technology particularly useful for certain bloodstream infections that progress to endotoxemia. The Seraph filters also have a blood-contacting surface that is anti-thrombogenic and anti-inflammatory to help reduce the risk of other harmful complications.

With new technologies like liquid biopsies and advanced blood tests for blood diseases, it's no wonder that researchers are finding a myriad of different ways to detect anomalies in the bloodstream. With Seraph's broad spectrum ability to remove pathogens without harming the the patient's blood, the company has begun evaluating the use of the technology in a dialysis-like extracorporeal circuit that can treat patients with both drug-resistant and drug-susceptible bloodstream infections.

Recently the company began exploring the technology's potential use in blood banking, as a simple pathogen reduction technology for treating individual units of blood -- indicating that there truly could be a broad range of applications for this budding technology.

"ExThera Medical is focused on developing simple devices for the rapid treatment of bloodstream infections, especially in the face of rising incidence rates, and the worldwide spread of drug-resistant pathogens," Ward said. "Effective treatments for potentially lethal bloodstream infections are also needed for members of our military for whom the risk of exposure is significant."