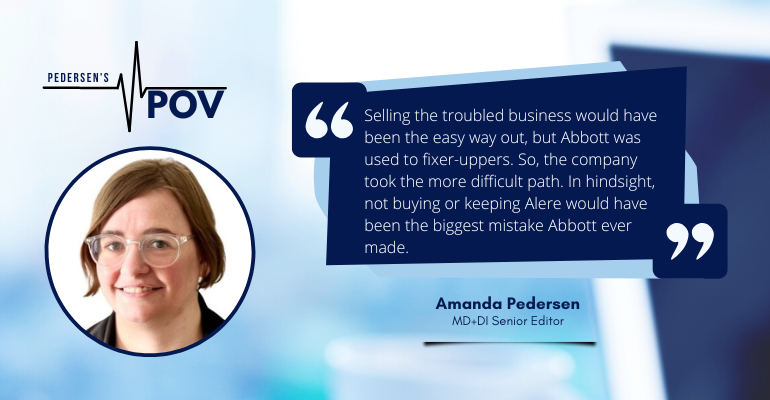 This week in Pedersen's POV, our senior editor explores where Abbott would be today without Alere.

Abbott has become a clear leader in COVID-19 testing, making billions off its COVID tests over the past two-plus years, driven largely by rapid at-home tests like the popular BinaxNow test.

But just five short years ago, Abbott was doing everything it legally could to walk away from the deal that ultimately added the Binax platform to its diagnostic arsenal. For those not familiar with this bit of medtech history or in need of a quick refresher, here's how it all went down:

I was pulling for Abbott at the time, convinced that acquiring Alere would be a mistake akin to Boston Scientific's acquisition of Guidant in 2006. That $27 billion deal was named the second-worst merger of all time by Fortune magazine, eclipsed only by AOL's purchase of Time Warner in 2000.

In the end, the two companies agreed to amended deal terms, including a $500 million price reduction, and officially tied the knot in October 2017. From there, Abbott had a big decision to make; sell Alere off to some other sucker or try to fix it.

So, where would Abbott be today without Alere?

The company would still have played a prominent role during the pandemic, given its other COVID-19 offerings. It would have developed molecular tests for the virus using its m2000 RealTime System and the Alinity m system, for example. But without rapid antigen testing and point-of-care testing options, its COVID-testing sales would be nowhere near what they are today.

Perhaps another diagnostic player would have acquired or merged with Alere instead, and that company would now be reaping the benefits of the Binax technology. Danaher had reportedly bid on Alere back then too, after all. Smaller diagnostic companies that sell COVID-19 tests would probably have a bigger piece of the pie too, so there most likely wouldn't be one clear COVID-19 diagnostic powerhouse like there is today.

Or, perhaps Alere's board would have cleaned house and put some of that $50 million buy-off money toward recruiting a more competent executive team and turned the ship around. In that case, maybe Alere would have been at the forefront of COVID-19 testing, and this week's POV might have been called "The Biggest Mistake Alere Didn't Make."

Pedersen's POV publishes every Monday. If there’s a medtech topic you would like her to consider, email [email protected] (please put “POV” in the subject line).