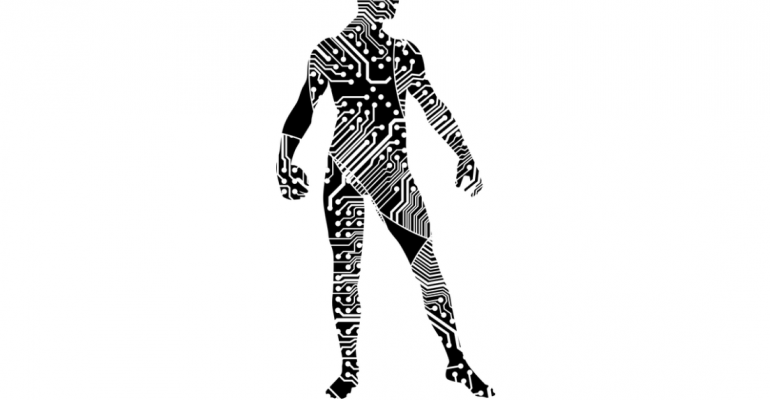 ETSI TC SmartBAN is a European Standards Organization Technical Committee that was created in 2013 for developing and maintaining an ETSI standard and specification, reports, guides, etc., relating to smart, wireless Body Area Networks (BANs). It addresses everything related to BANs in a holistic way, from tiny medical sensors located inside/on the body to remote end-user devices (e.g., hospital medical information system (MISs), caregivers’ tablets and smartphones) as well as from physical (PHY) and medium-access control (MAC) layersup to application layers. The addressed verticals are currently mainly related to eHealth, wellbeing/wellness, and personal safety, but other use cases related to other markets such as automotive are also envisioned. Figure 1 below presents an example of a considered ETSI SmartBAN end-to-end environment. 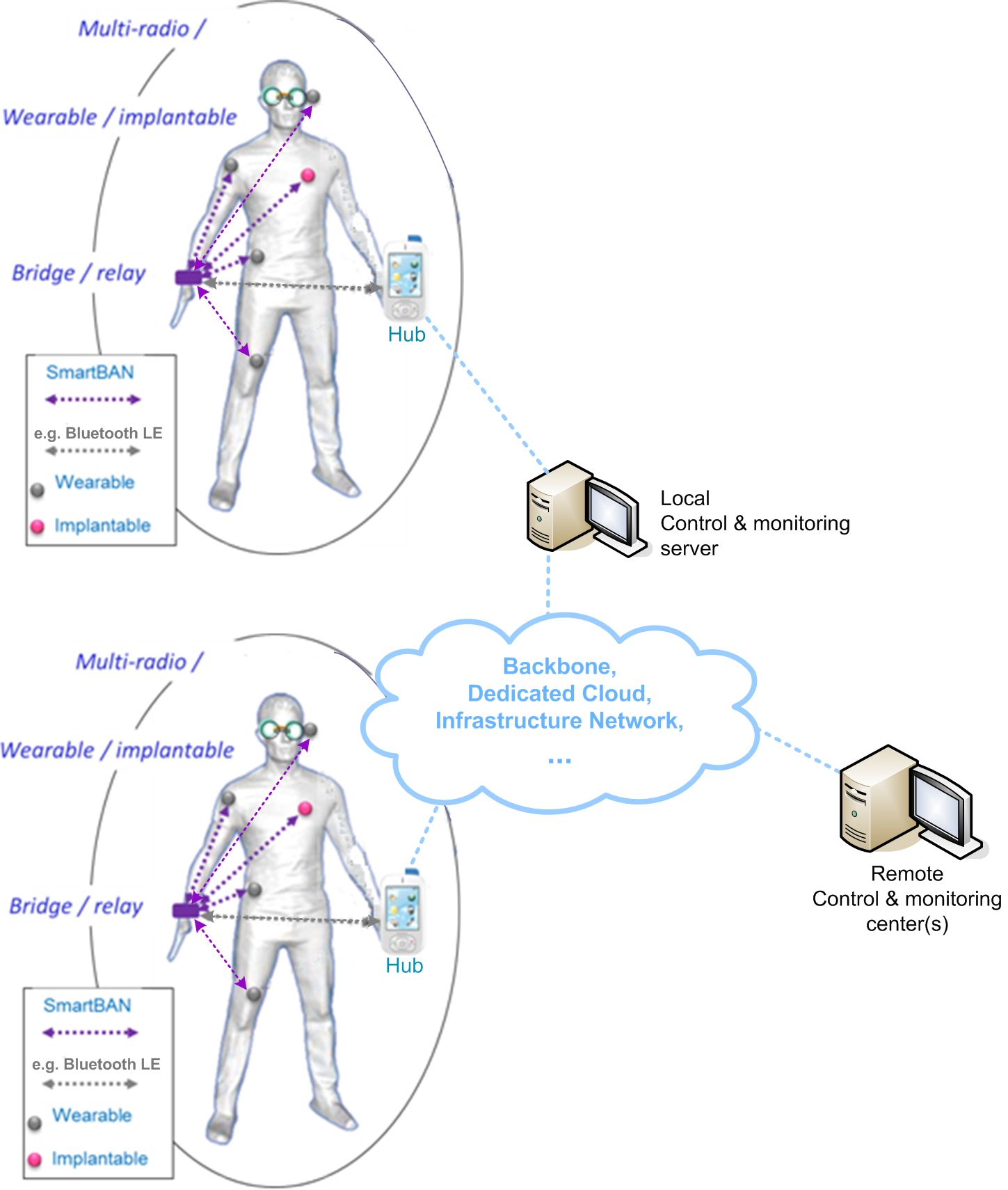 SmartBAN uses a set of low-power embedded devices, mainly sensors, wearables, or actuators, to collect and monitor vital data of a human being and his or her environment, but not exclusively. For each patient coming to an emergency room, ETSI TS 103 327 will make all medical history already available in a unified and uniquely interpretable format. It will thus enable an intelligent and accurate intervention.

Within the SmartBAN reference architecture, semantic interoperability is in particular addressed through a Web of Things (WoT) strategy, which:

Figure 2 shows that the SmartBAN global IoT reference architecture is:

Finally, the SmartBAN Application layer depicted in Figure 2 will host all the IoT applications that are implementing a given SmartBAN application logic such as patient/caregiver notification, vital data monitoring, patient evaluation results, etc.

In the context of both ETSI SmartBAN TC and EUREKA ITEA 13034 CareWare project activities, the SmartBAN global IoT reference architecture was carried out, validated, and clinically tested on an elderly at-home support/monitoring use case (SmartBAN showcase). This work was done in strong collaboration with the Office d’Hygiène Sociale, Nancy (OHS Nancy Lorraine, France). The SmartBAN-based monitoring and control platform used for the clinical tests was co-implemented (co-conception) with both OHS’s caregivers and patients. Figure 3 below presents the overview of the SmartBAN elderly-at-home support/monitoring platform implemented. 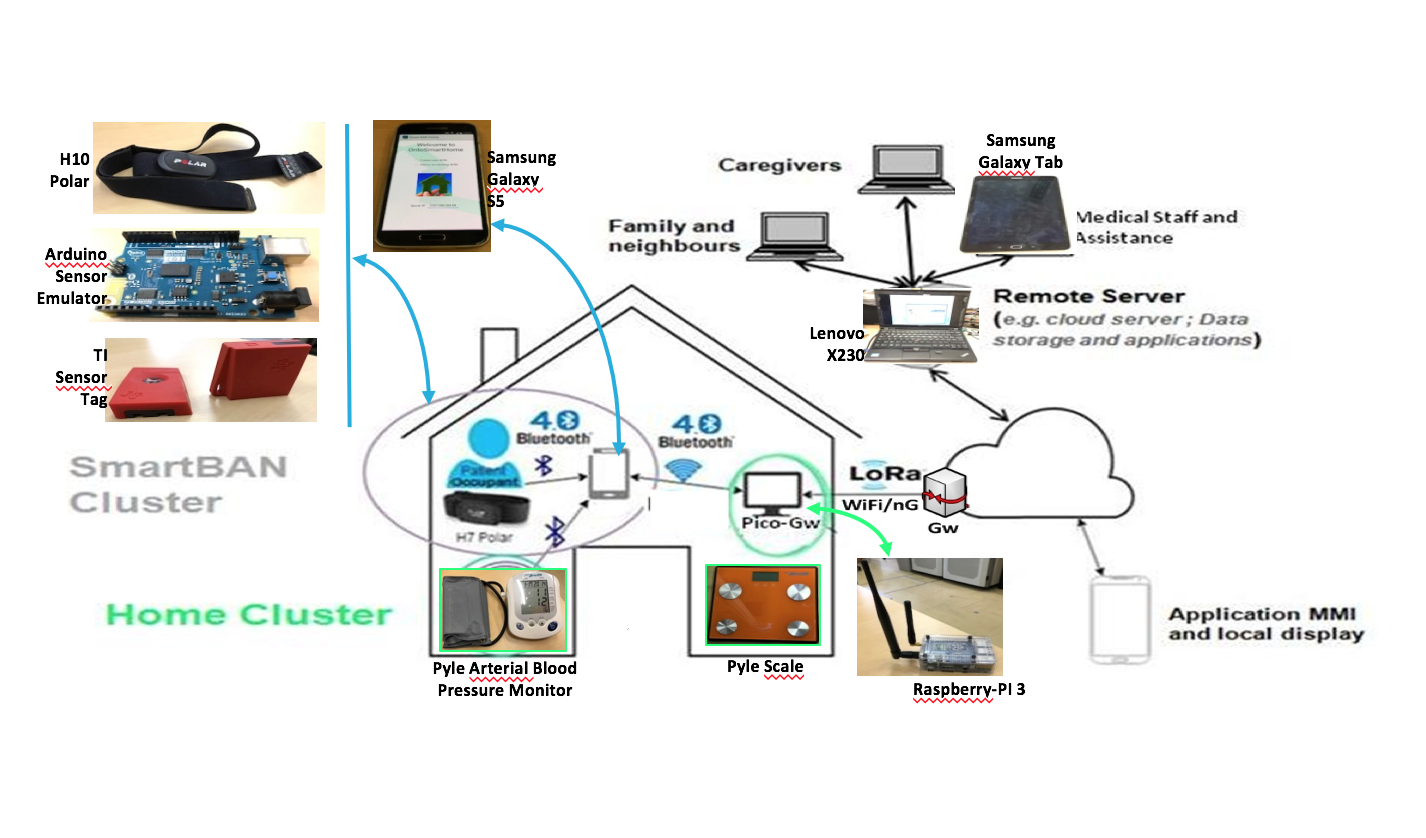 For the clinical tests, 25 elderly people were continuously monitored during one month. The building blocks of the SmatBAN IoT reference architecture that were used for the tests are depicted in Figure 4 below.

As shown in Figure 4, the elderly patient vital parameters/behaviors that were monitored and/or controlled through the implemented SmartBAN platform were:

All the aforementioned clinical tests were successfully completed, with a good acceptance level by both elderly patients and OHS caregivers. During the tests, the provided SmartBAN IoT application has in particular allowed patient behavior detection and/or validation (e.g., normal/average heart rate, sleep disorder, stress, vital/physiological data changes), critical situation detection and validation (e.g., body temperature or heart rate below/beyond a given threshold, fall), caregiver improved support in their daily work, and reinvolvement of patients in the medical-social processes.