Predict and Prevent: The Emergence of Real-Time Sensor-Based Care 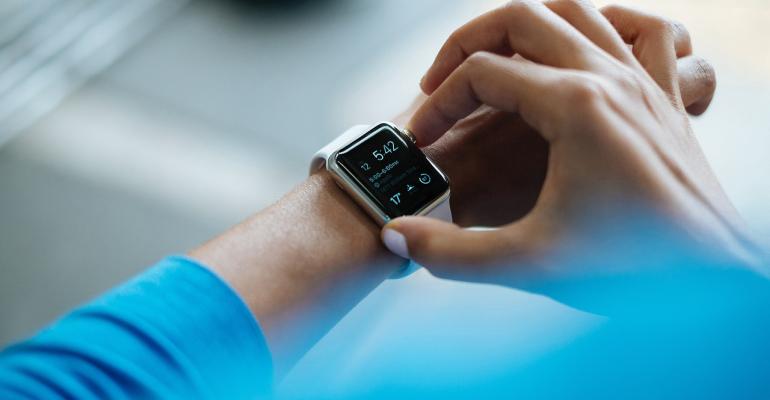 Wearables are being used for everything from smoking cessation to epilepsy management.

Technology industry veteran Eran Ofir knows there is a lot of luck involved in successfully bringing a new device, especially one designed to create a new treatment vector, to market.

Ofir is the CEO and co-founder of New York-based Somatix, which uses wrist-worn sensor data to dynamically monitor a person's situation. Used in conjunction with cloud-based computing resources and a communications device, the technology is capable of dynamically helping someone quit smoking, through detecting smoking gestures and automatically sending messages to the user encouraging them not to smoke.

"We got lucky on two fronts," Ofir said. "One, we anticipated, in late 2014, what would happen with wearable devices. Everyone was still arguing with me whether wearables would be the next revolution, but there are already 40 million Americans wearing these devices and nobody is asking that question anymore. The second stroke of luck was the emergence of reimbursement codes for remote monitoring. Here we were really lucky because when one of our health system partners uses our dashboard, it's a new revenue stream for them."

Somatix is not alone in venturing out into the next era of taming the raw data of the human body. From acknowledged leaders in cutting-edge academic research such as the MIT Media Lab to startups with similar approaches to Somatix, the era of putting the load on technology and taking it off of users is about to begin.

Ofir and his colleagues have already picked up $7.5 million in seed and Series A funding and are tentatively poised to start Series B funding in the second quarter of 2019. The company's first two products, a smoking cessation platform (SmokeBeat) and activities of daily living monitoring platform (SafeBeing), have been launched in proof-of-concept deployments, and SmokeBeat's effectiveness has been investigated in two small studies. The authors of both found the technology worked as Somatix developers claimed, with accuracy rates of 80 percent and above, and false positive rates of about 3 percent. Users especially liked the fact they did not need to make manual entries into smoking diaries.

"Our investors told us, and rightfully so, in order to get more investors, we had to provide a use case, to prove it was feasible," Ofir said. "So we started with one, and that was smoking. We knew it was big enough and interesting enough and was kind of low-hanging fruit for our technology."

He said the company is deliberately not attempting to gain FDA approval for the platform as a medical device:  "We are defined as a clinical decision support system," he said. "It's basically a tool and dashboard. We collect enormous amounts of data on a person every day and we analyze continuously in order to understand the activities of that patient. We provide remote monitoring inside predictive analytics and the caregiver or provider organization is in charge of the patient. They are the ones who are actually providing the healthcare service. That is why we don't need FDA approval."

The developers of another pioneering wearable dynamic sensor-based platform opted instead to obtain FDA approval. The Embrace epilepsy management system, developed by Empatica, an MIT Media Lab spin-off, consists of a smart watch equipped with an accelerometer, gyroscope, and electrodermic activity sensors. The system also includes apps that notify caregivers when it detects seizure activity and keeps an automated diary. The newest version, the Embrace2, requires a prescription and sells for a list price for the smartwatch plus a subscription monitoring plan.

"Right now, to my knowledge, Empatica is the only company that has an FDA-cleared machine learning AI system that works in real time on a smart watch in neurology," Rosalind Picard, Empatica chief scientist and co-founder, said. "We are on the market, I can't say on exactly how many wrists, but I can say thousands. We believe we are already out there saving lives."

Engineering and Design Rigor Is a Must

No matter what regulatory approach a company takes, the emergence of this personalized technology strongly signals the era of shoehorning some relevant individual information out of a shotgun-like tracker data stream is waning. Both Picard and Ofir emphasized that system designers need to carefully consider both technological and human needs in bringing the new devices to market.

"Yes, the technology has to work accurately in the real world, which is harder than it sounds," Picard said, "but it's also the case we have to match the value it provides with a real pain point that somebody is willing to pay for."

For Ofir, bringing the Somatix technology to market has been a lesson in iterative design. While the business model of selling the platform to enterprise customers has remained steady, he said the engineering concepts have changed somewhat – and he has taken lessons from those who went before.

"There were many companies in the American market – in fact, I have an Excel of them – that tried. Everyone wanted to develop a real-time gesture detection product using wearable devices and they all failed because they tried to do the gesture detection itself in the cloud instead of in the device itself. That is a very big mistake.

"You don't have enough bandwidth to take all that data and send it to the cloud to do all that computing. You have to do all the computing on the device itself and that is difficult to do. Not only do we need to do things like data cleansing, noise filtering, and bringing sample rates from each sensor to the same common denominator, but we also have to translate all the algorithms that were originally written in Java into C and even into lower-level languages to fit into the very scarce computing and storage capabilities of the device itself."

Ofir also said potential clients told him targeting the app to commercial smartwatches would not be economically or ergonomically feasible, especially with elderly users, so Somatix developed its own rechargeable smart band that can be used not only for smoking cessation or personal monitoring but can also be expanded to other conditions.

"The same platform can be used for different use cases, so it doesn't make sense for a hospital to go to multiple vendors who do just one use case with a specific device for different conditions," he said. "We do all cases, we are device agnostic, and that will be very difficult for other competitors to sell against us."

Somatix may have at least one competitor in the smoking cessation market, however. Boca Raton, FL-based iMorph Smart Technologies is currently in prototype mode for its wearable-and-smartphone platform and estimates its inaugural trial will begin Feb. 1. First products may ship in the third quarter of the year.

As the healthcare capabilities for wearable-based technology become more granular, Picard said she hopes developers keep in mind that real usefulness, not just the availability of ever-larger streams of amorphous data, need to be demonstrated.

"The tricky part is how do you give your consumers things that really improve their lives?" she said. "In some cases, giving people some stress information may not improve their lives – it may make them more stressed. If you really focus not just on selling gizmos, but you're really focused on improving lives, you really have to work hard with potential customers and make sure you understand what their needs are – what helps them and what doesn't."