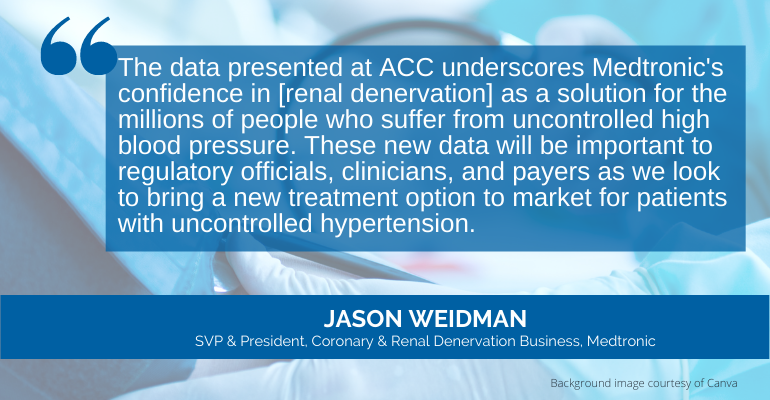 Medtronic's perseverance in renal denervation appears to be paying off – even if investors have "mostly given up" on the opportunity.

Eight years after reporting unexpected results from the SYMPLICITY HTN-3 trial, the company presented promising long-term data from the first 80 patients in the SPYRAL HTN-ON MED trial this week at the American College of Cardiology's (ACC) 71st Annual Scientific Session that has renewed excitement around renal denervation. The data were also simultaneously published in The Lancet.

The Medtronic Symplicity Spyral Renal Denervation System is designed to deliver radiofrequency energy to specific nerves near the kidneys that can become overactive and cause high blood pressure. The catheter-based procedure is intended to treat resistant hypertension (high blood pressure that remains uncontrolled even with medication).

In the first 80 patients of the SPYRAL HTN-ON MED trial, the data demonstrated that patients who were prescribed anti-hypertensive medications and treated with the Medtronic Symplicity Spyral Renal Denervation System continued to show durable, clinically significant blood pressure reductions through three years. At three years:

"Across the latest trials, consistent blood pressure reductions have been observed in patients with uncontrolled hypertension treated with the Medtronic Symplicity Spyral [Renal Denervation] System," said Felix Mahfoud, MD, cardiologist at Saarland University Hospital in Homburg, Germany, and member of the SPYRAL HTN executive committee. "For the first time, we now have randomized data that demonstrates that in a typical patient population – hypertension patients who are on anti-hypertensive medications and treated with [renal denervation] – we are seeing the continued, long-term blood pressure lowering effect. Lowering blood pressure can have meaningful clinical results for patients, including a decrease in the risk of cardiovascular events."

"With the ON MED randomized data presented and published today, Medtronic has now demonstrated the long-term benefit of renal denervation against a backdrop of an anti-hypertensive medication, with continued demonstration of a safe procedure," said Jeffrey Popma, MD, chief medical officer for the coronary & renal denervation business and the structural heart & aortic business at Medtronic. "This highlights the importance of additional treatment options such as renal denervation."

Medtronic said it has also completed randomization for the full cohort for the SPYRAL HTN-ON MED trial and closed enrollment. The full analysis cohort targets up to 340 randomized patients. Medtronic expects the six-month post procedure follow-up for the full cohort will be complete in the second half of 2022.

"The data presented at ACC underscores Medtronic's confidence in [renal denervation] as a solution for the millions of people who suffer from uncontrolled high blood pressure. These new data will be important to regulatory officials, clinicians, and payers as we look to bring a new treatment option to market for patients with uncontrolled hypertension," said Jason Weidman, senior vice president and president of the coronary & renal denervation business at Medtronic. "Looking ahead, we remain focused on the anticipated six-month follow up for the full cohort of the ON MED trial in the second half of this calendar year."

Key Takeaway No. 1: Incomplete medication adherence was common (at least early on)

The true holy grail of renal denervation will be realized if and when it advances to the point where it can safely be used as an alternative to, rather in conjunction with, blood pressure medication. It's no secret, after all, that many patients with high blood pressure are less than compliant with their medication and other lifestyle changes.

Key Takeaway No. 2: It was an important moment for the entire field

After all the ups, downs, twists, and turns along the renal denervation journey, it wasn't surprising to see Medtronic celebrating the moment that the results were presented at ACC.

But this was a win for everyone involved in renal denervation. That includes companies like ReCor Medical, a Palo Alto, CA-based company that is also working in this field. Instead of radiofrequency energy, ReCor is developing an ultrasound-based approach to renal denervation.

Key Takeaway No. 3: Now we await the full cohort data

The data presented this week included just the first 80 patients randomly assigned to undergo renal denervation (38 patients) or a sham control procedure (42 patients). The real excitement will be later this year when the company reports on the six-month follow up for the full cohort of the ON MED trial. If all goes well, that could set Medtronic up for FDA approval.

Medtronic Isn't Ready to Throw in the Towel on Renal Denervation Just Yet
Mar 23, 2022