Will Your EpiPen Work in an Emergency?

Mylan said its manufacturing partner for EpiPen devices has expanded a recall of the product in the United States and other markets. 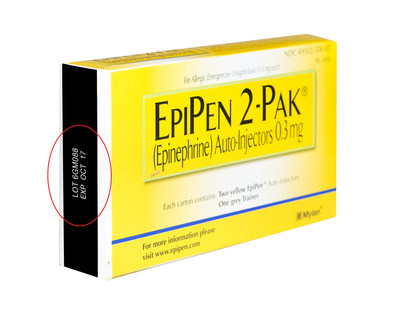 Mylan's manufacturing partner for the EpiPen and EpiPen Jr products has recalled 13 lots of the devices due to the potential that they contain a defective part that could cause activation failure.

Patients who carry an EpiPen or EpiPen Jr do so with the understanding that if the time comes to use the device, it could potentially save their life from a severe allergic reaction. But the auto-injector products are not fool proof, as at least two people learned the hard way, when their devices failed to work in emergencies.

FDA and Mylan alerted consumers Friday afternoon that Meridian Medical Technologies, the company that makes the EpiPen products distributed by Mylan Specialty, has recalled 13 lots of EpiPen and EpiPen Jr due to the potential that the devices may contain a defective part that could cause activation failure.

The U.S. recall was initiated a week after the company recalled about 81,000 EpiPen devices that were sold outside the United States after two reports of the devices failing to work in emergencies. The recall initiated in the United States will extend to Europe, Asia, North and South America, Mylan said.

While the number of reported failures is small, FDA noted, the devices are being recalled because of the potential for life-threatening risk if a severe allergic reaction goes untreated. The agency said that, as stated on the product label, consumers should always seek emergency medical help right away after using their EpiPens, especially if the device did not activate. FDA said consumers should keep and use their current EpiPens if needed until they get a replacement.

Last October, Mylan settled U.S. Department of Justice charges that it had overcharged Medicaid for years by classifying EpiPen as a generic instead of as a brand-named product. The company agreed to pay $465 million as part of the settlement.

A couple months later, Mylan launched a generic EpiPen auto-injector for $300, roughly half the price of the original.