Did Endologix Bite Off More Than It Could Chew?

Endologix seems to be taking a proactive stance to nip an AFX manufacturing glitch in the bud, but analysts wonder if the company's portfolio is just too broad. The company expects to share more details by the end of the week. 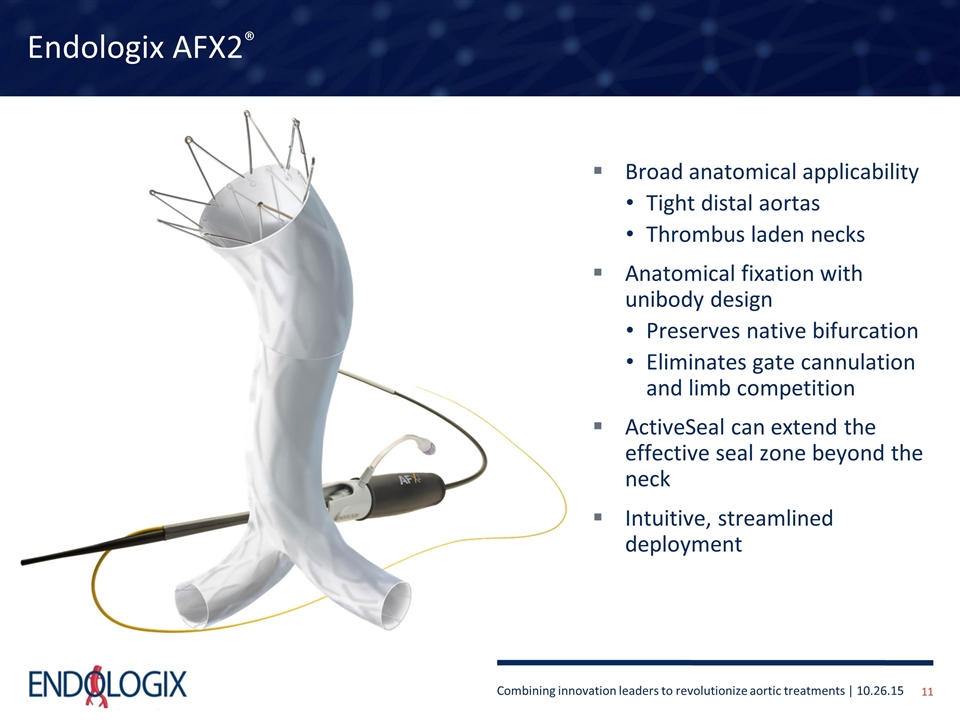 Endologix Inc. put shipments of its AFX system on hold Tuesday after finding damage to the graft material in certain larger sizes of the product that is more difficult to make.

The Irvine, CA-based company put shipments of its AFX endovascular AAA and AFX2 bifurcated endograft systems on hold Tuesday after finding damage to the graft material in certain larger sizes of AFX2 that are more difficult to make, McDermott said.

The problem was discovered over the weekend during routine product testing, he said, and the company expects to share more information by the end of the week, after it completes its investigation. Because AFX and AFX2 share similar manufacturing processes, production of both products is on hold.

Endologix appears to be getting out in front of the problem and trying to "nip it in the bud," as McDermott put it during a conference call, but analysts took the news as the company's third strike in a matter of months. Since completing its $211 million merger with Trivascular Technologies Inc. in February, Endologix has been hit with a CE mark suspension of AFX in Europe, plus FDA delays on its hotly anticipated Nellix endovascular aneurysm sealing system.

"We all understand the merits of having a broad, if not the broadest, portfolio in AAA, but with this announcement, and recent updates on Nellix and AFX in Europe, you have to wonder whether this portfolio may be too broad for you," said Matt Blackman, of Stifel, Nicolaus & Co. Inc., during the Endologix conference call.

It was a fair comment, McDermott said, but not likely the case. "This is just an unusual situation. I wouldn't read too much into our capability of managing our portfolio," he said. "These particular devices that we identified are historically more challenging to load, and we've put in some good product improvement processes over the years, but occasionally see excursions."

FDA approved the original AFX system in 2011 and Endologix released the AFX2 earlier this year. Vaseem Mahboob, the company's chief financial officer, said the products being held by this shipment hold account for about 65% of the company's total global sales.

"The good news is we caught this internally, this didn't lead to any outside events, so that's why we're confident we can turn it around and fix it," McDermott said. "Wish it didn't happen, of course, but we felt once we identified it we needed to put the product on hold and just be very proactive."

This issue does not impact the company's Ovation ix abdominal stent graft system or Nellix, McDermott said. He also emphasized that the problem is not related to any reported clinical events or the CE mark suspension of AFX.

McDermott said he does not expect the current manufacturing snafu to impact how soon regulating officials in Europe might lift the CE mark suspension, because the problem in Europe has to do with reported clinical events that may have been caused by an older generation of the AFX system.

Nellix, which is designed to treat patients with AAA located below the renal arteries, received CE mark in January 2013. Endologix had projected FDA approval for that device by early 2017, but in November the agency asked for two-year patient follow-up data from the company's IDE study. That, combined with a possible need for an advisory panel hearing, pushes the anticipated approval into the second quarter of 2018.

It is possible that hospitals have AFX and AFX2 devices that could have the same graft defect that kicked off this shipment hold, McDermott said, but the company doesn't provide a lot of inventory for hospitals to keep on shelves. Rather, he said, Endologix sales representatives take the product in as needed for procedures.

To offer some perspective on how long this problem may or may not have been going on undetected, McDermott said the company completed a similar round of routine product testing over the summer that did not turn up any problems, and the AFX2 went through a thorough validation process before it was released earlier this year.

"I'm not trying to make any excuses, but I don't think this is anything more than just an unfortunate set of circumstances and timing, and we'll get it fixed as quickly as we can," McDermott said.

Meanwhile, the company's U.S. sales force is prepared to shift its focus to Ovation, which Endologix has plenty of inventory to meet any potential increase in demand that results from the shipment hold of AFX and AFX2. "Not how we planned it, but there will be an opportunity here for the team to accelerate their learning and capability with Ovation," he said.