How Big Data is Hoping To Power Predictive Analytics 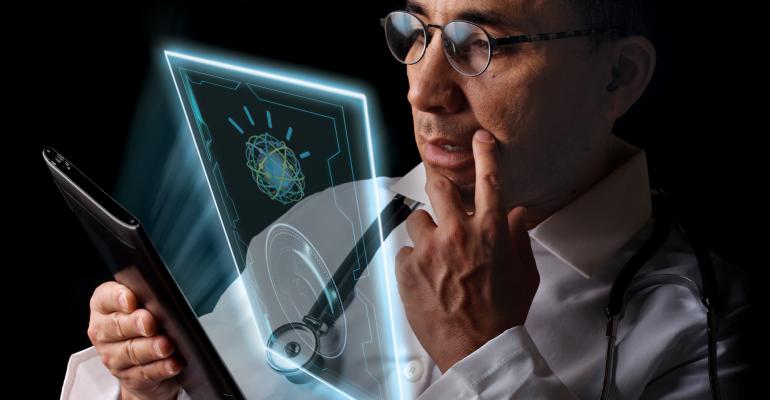 Anyone interested in understanding how big data can be harnessed as a predictive diagnostic tool?

If so, they should head over to MD&M East where IBM Watson Health's Kathy McGroddy-Goetz will do a live demo of the supercomputer's ability to sort through piles of raw data to provide real-time information. McGroddy-Goetz, vice president, Partnerships & Solutions at the standalone health unit of IBM, will do the demo on June 14 at the Jacob Javitz Convention Center in New York. The MD&M East Conference runs June 14-16.

The goal is to show how artificial intelligence can be leveraged to provide personalized treatments for people battling diseases like cancer and diabetes. IBM Watson Health is already working with Medtronic in the field of diabetes.

Earliert his year, Medtronic's CEO, Omar Ishrak, and IBM's CEO, Ginny Rometty, unveiled a research prototype concept for a first-of-its-kind cognitive app that can help to detect critical patterns and trends for people with diabetes to making daily management of diabetes simpler.

In other words, data collected by Medtronic's wearable devices -- the insulin pumps and continuous glucose monitors -- will be put to work by Watson's data analytics that can crunch innumerable data points to glean important insignts.

Late last year, MD+DI caught up with Kathy McGroddy to talk about how Big Data holds untold opportunity in healthcare.

"I think we've got an incredible combination of both cognitive knowledge-based learnings and analytics combined with data-driven machine learning technologies, both of which represent more than 10 years of research investment by IBM," said Kathy McGroddy-Goetz, vice president of partnerships and solutions at IBM Watson Health. "We've had about 150 people working worldwide on healthcare problems--big data in healthcare as well as genomics, other life sciences technologies, drug-delivery capabilities--so we had all these technologies, and we realized if we had to bring this together and set it up as cloud-delivered services to solidify as a service, then we could start to really seed an ecosystem."

That research is now being put to work.

"Say you have a 52-year-old woman with breast cancer.  Today, Watson can tell which clinical trials she would be eligible for . . ." McGroddy-Goetz explained.

Watson Health's clinical trial-matching capability can show, for example, that there are three other clinical trials that could be beneficial to the patient, but to be eligible she would need to stop taking another medication she is currently on.

"So it actually gives the doctor and the patient a lot more power in the conversation they are having because they can talk about the options and the pros and cons and make decisions based on the evidence that has been presented to support these recommendations . . ." McGroddy-Goetz said.
For doctors, IBM's analytics tool can help make sense of the data.

"There can be so much data out there that you can be overwhelmed by the noise and have trouble finding the signal in the noise," McGroddy-Goetz said. "You need the analytics to find the insights from the data."

"Instead of going down the hall to find the expert to ask for guidance on a case that you are dealing with, you have a Watson system there that can provide you with some additional information and context, and maybe a recommendation. For instance, Watson can say the "majority of patients like this one who were treated in this way had a better outcome than with this alternative treatment," McGroddy-Goetz explained.

That is powerful because that capability can help to democratize access to the best care for patients living far away from specialty hospitals.

"The power of it is that you can scale that out to community hospitals," McGroddy-Goetz said. "Now imagine being a cancer patient who can be treated at your local community hospital [instead of traveling to a specialty hospital like Memorial Sloan Kettering]."

Aside from enabling doctors to deliver better care, IBM Watson also holds value for companies like Medtronic that are trying to play a broader role in the continuum of care outside of their traditional sweet spot--hospitals. In fact, in announcing the official launch of IBM Watson Health in April 2015, IBM also announced that the standalone business unit would partner with the likes of Medtronic, Johnson & Johnson, and Apple.

"With IBM, the focus is primarily on diabetes, where we want to use the Watson analytics expertise and apply it to the dataset that we collect on a regular basis from patients with diabetes and see if we can use those analytics to better manage patient care," explained Medtronic CEO Omar Ishrak in an interview in August.

The partnerships and acquisitions IBM Watson Health has announced since its launch are meant to connect disparate dots of data trapped in devices, medical imaging, and electronic medical records, as well as clinical research journals and consumer devices such as smartphones.

The goal is simple: "We really want this to be both a technology platform and a business platform where people are going to come to collaborate and create this huge ecosystem and transform healthcare," McGroddy-Goetz said.