How to Turn Human Cell DNA Into a 'Tape Recorder'

A new study shows how complex histories can be recorded in the DNA of human cells, allowing them to retrieve data from past events--a breakthrough that could lead to new methods for monitoring infection and cancer progression. 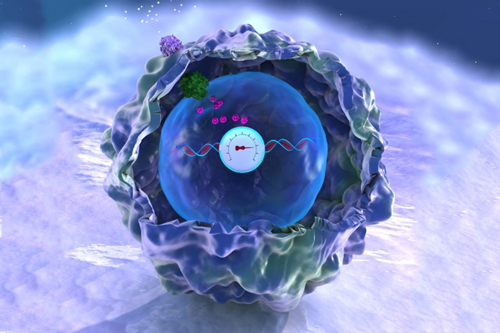 Biological engineers at MIT have developed a new technique to enable human cells to recall events from the past, such as inflammation or infection, by sequencing the DNA of individual cells. The method, designed to operate as an analog memory storage system, could become the first of its kind to record the duration and intensity of events in human cells.

"We built a system that can continuously accumulate mutation in human DNA as a molecular 'tape recorder' of cellular history," says Timothy Lu, associate professor of electrical engineering and computer science at MIT and senior author on the work.

"The extent of accumulation of the mutations can be programmed to depend on the duration and/or intensity of biological activities of interest, like chemical signals or gene expression," Lu says. "Thus, our memory system actually encodes analog memory because it allows you to record quantitative information about a signal, as opposed to digital memory, which only allows you to store whether a signal has happened or not."

Many different methods have previously shown that digital information can be recorded in living cells, which have enabled scientists to program cells to flip sections of their DNA when a particular event occurs. Unfortunately, these methods only reveal whether or not a particular event occurred, without providing any details on how much exposure there was to a chemical or how long the event lasted. This new approach, based on the genome editing system known as CRISPR, aims to account for such details and store the information in the human genome.

CRISPR made new headlines over the summer when it received unanimous approval from a U.S. federal biosafety and ethics committee to begin human trials to create genetically-altered immune cells that fight cancer.

Samuel Perli, Ph.D candidate in electrical engineering and computer science at MIT and one of the lead authors on the work, explains CRISPR's role in the new recording method.

"CRISPR is a genome engineering tool that enables one to generate mutations at specific locations on the genome," he says. "CRISPR is a two-component system comprised of the DNA cleaving protein Cas9, and a small guide RNA that specifies the DNA sequence to be targeted. By modifying the small guide RNA, we built a self-targeting guide RNA that redirects Cas9 to generate mutations on the DNA encoding the self-targeting guide RNA itself. This results in repeated generation of mutations that accumulate in a way that is commensurate to the duration of activity and intensity of the signals."

To show this, the team engineered a gene circuit that only expresses Cas9 in the presence of a target molecule. The group used TNF-alpha, a molecule produced by immune cells during inflammation, as a target for Cas9. The aim was that whenever TNF-alpha is present, the Cas9 cuts the DNA encoding guide sequence, which will generate mutations. The greater the TNF-alpha concentration, the more mutations will accumulate in the DNA sequence--allowing researchers to monitor the cells exposure to the molecule.

"A quick way this system can be used is to monitor the exposure to various signals that individual cells in a microenvironment of interest experience," Lu says. "Studying the heterogeneity of individual cells in a tumor or a differentiating tissue would be of great interest. One could also study the sequence of events that occur to regulate the differentiation of stem cells into mature cell types within animal models."

Essentially the group aims to show that this method could be used to engineer cells that can detect and record more than one input by producing multiple self-targeting RNA guide strands in each cell. Each RNA guide would then be linked to a specific input, and would only be produced when that input is present. By programming cells to record multiple events, scientists could use the system to monitor a wide variety of things from inflammation and infection to cancer and disease progression.