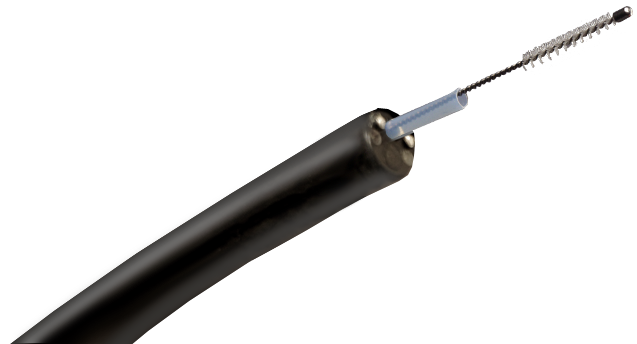 A study found the WATS3D (Wide Area Transepithelial Sampling with 3D Tissue Analysis) system, made by CDx Diagnostics, to be four times more effective at detecting a pre-cancerous esophageal condition compared to the standard protocol.

A biopsy system that employs missile defense technology from President Ronald Reagan's U.S. Strategic Defense Initiative, better known as the Star Wars program, increased the detection of a pre-cancerous condition by more than 400% over a standard protocol, according to a new study.

The multi-center, prospective, randomized study compared the CDx Diagnostics' Wide Area Transepithelial Sampling with 3D Tissue Analysis (WATS3D) system with the standard Seattle protocol for detecting Barrett's esophagus, a precancerous condition brought on by gastroesophageal reflux disease, or GERD. One in six Americans has GERD symptoms weekly, and about 10% of those have Barrett's esophagus, according to the Dana Farber Cancer Center. The American Cancer Society estimates that 17,000 people are diagnosed with esophageal cancer each year in the U.S.

In the Seattle protocol, a gastroenterologist or GI pathologist uses forceps to perform a four-quadrant biopsy, sampling esophageal tissue every 1-2 cm. Because tissue changes associated with Barrett's esophagus may be small or difficult to detect, the physician might miss the affected section. With WATS3D, the physician uses a stiff-bristled brush to scrape around the esophageal wall in an up-and-down motion. The brush allows for more and deeper sampling than forceps, according to Seth Gross, MD, chief of gastroenterology at Tisch Hospital/New York University Langone Health.

The physician using WATS3D collects samples with two different brushes. The system uses extended depth-of-field processing developed for missile defense to scan samples three-dimensionally. Its neural network combines more than 100 optical slices of an uncut specimen into a three-dimensional image of cells in all layers. The system then brings the 200 most suspicious cells and cell clusters from each patient to the attention of the pathologist, according to Suffern, N.Y.-based CDx.

WATS3D detected 29 cases of high-grade dysplasia and esophageal adenocarcinoma, while the Seattle random forceps biopsy detected only seven such cases among 160 high-risk patients undergoing Barrett's esophagus surveillance, according to the study, which was conducted in 16 major academic U.S. GI centers.

"It gets a deeper grab," Gross told Qmed. He was one of the investigators of the study, published in the journal Gastrointestinal Endoscopy. "The other thing that makes this unique, they've been able to use missile defense technology based out of the Star Wars program to have a computer analyze clusters of cells, being able to differentiate a healthy one versus a concerning one. It's pretty amazing that these computers do this."

WATS3D has FDA 510(k) clearance and a CE Mark, and is available for sale in the United States and Europe. Physicians using it to supplement the traditional esophageal biopsy method rather than as a stand-alone diagnostic system, according to Gross. He considers it an improvement on a previous brush biopsy device, which had bristles he found to be too soft.

"It's also a very big step forward that the WATS brush with the use of the neural network could identify abnormal cells," Gross said. " I suspect that there will be some additional clinical questions answered."