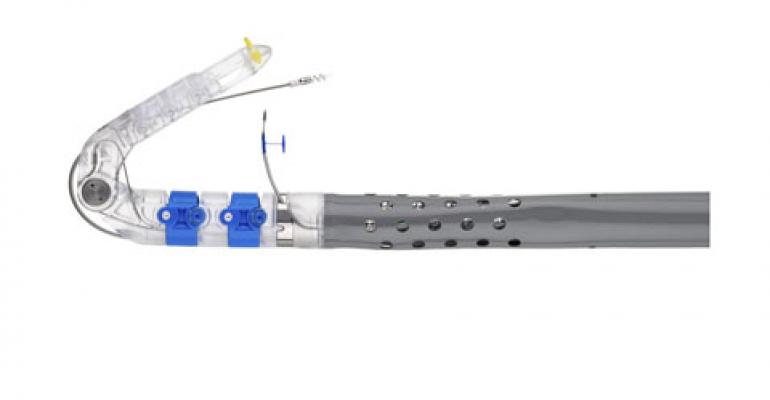 EndoGastric Solutions has slowly been building clinical evidence to back up claims about its device to treat gastroesophageal reflux disease, and its efforts are finally paying off.

Affecting roughly one in four Americans, gastroesophageal reflux disease (GERD) can cause heartburn, persistent cough, a chronic sore throat, bloating, and regurgitation. Treatment options include a daily regimen of proton pump inhibitor drugs (PPIs) and Nissen fundoplication surgery, which involves wrapping the upper part of the stomach around the esophagus.

But PPIs were never intended for long-term use, which has been linked to a variety of health complications, and the Nissen fundoplication procedure is invasive and associated with significant side effects.

EndoGastric Solutions says its EsophyX device is a better option. Cleared by FDA in 2007, EsophyX is used to perform Transoral Incisionless Fundoplication (TIF), a procedure that achieves a similar result to Nissen fundoplication without requiring cuts to be made on the patient. Instead, the device, which is guided by an endoscope, is inserted through the mouth and passed through the throat and esophagus to reach the stomach.

Esophyx was fully launched back in 2008, and since then the San Mateo-based company has been slowly building clinical data to prove the device's efficacy—a smart move when providers increasingly want to be assured that the products they buy will deliver real value.

“The most important thing that we focus on and have spent and invested in significantly is the clinical data,” says Skip Baldino, president and CEO of EndoGastric Solutions. “Most of our emphasis in the past several years has been in being able to provide the market with really good, compelling clinical data.”

He says the company took to heart a recent New England Journal of Medicine editorial calling for medical device companies to use sham controls in their trials.

“The challenge was for medical device companies to step up to the rigorous standards the pharmaceutical industry has consistently done,” Baldino says, adding that EndoGastric Solutions has met both the primary and secondary endpoints in sham-controlled studies with rigorous clinical trial designs.

A compilation of U.S. studies shows that after undergoing the TIF procedure, 85% of patients halted their daily usage of PPI medication to control symptoms; 75% went completely off PPIs while another 10% use the drugs only on special occasions. In addition, 85% of patients were completely healed of esophagitis, a precursor to cancer, after the procedure.

In 2014 alone, EndoGastric Solutions had eight sets of clinical data presented in seven different journals. This past January, a study detailed in the journal Gastroenterology found the TIF procedure to be more effective than sham surgery and high-dose PPIs at eliminating regurgitation in chronic GERD patients with hiatal hernias less than 2 cm.

“The focus was on regurgitation, which is a very, very difficult GERD patient to treat,” Baldino says.

And the company’s quest to prove the efficacy of its product continues. An upcoming study will compare TIF head to head with endoscopic Nissen fundoplication, and Baldino hopes the results will help EndoGastric Solutions make an even stronger economic case for its product.

The focus on backing up its claims with data appears to be paying off, too. In March, the American Medical Association published a new category 1 CPT code for the procedure, which will be implemented in 2016. Baldino says the move is an acknowledgement of broad acceptance of the TIF procedure among both GI physicians and surgeons.

To date, Baldino estimates that EndoGastric Solutions has successfully treated 16,500 patients, primarily in the United States. EsophyX is currently available in regular and high-definition variations, with the latter configured to accommodate a high-definition endoscope. The company also sells SerosaFuse Fastners, which are used in the TIF procedure, and it hopes to soon launch a new variation of the EsophyX, the EsophyX Z, which will allow the platform to be used with a broader variety of endoscopes.

Its plan is to continue iterating the EsophyX product and marketing it to both GI physicians and surgeons.

Yael Grauer is a freelance contributor to MD+DI. Read more of her work at http://yaelwrites.com