Developing an Alternative to the Snap Fit in Thermoformed Trays 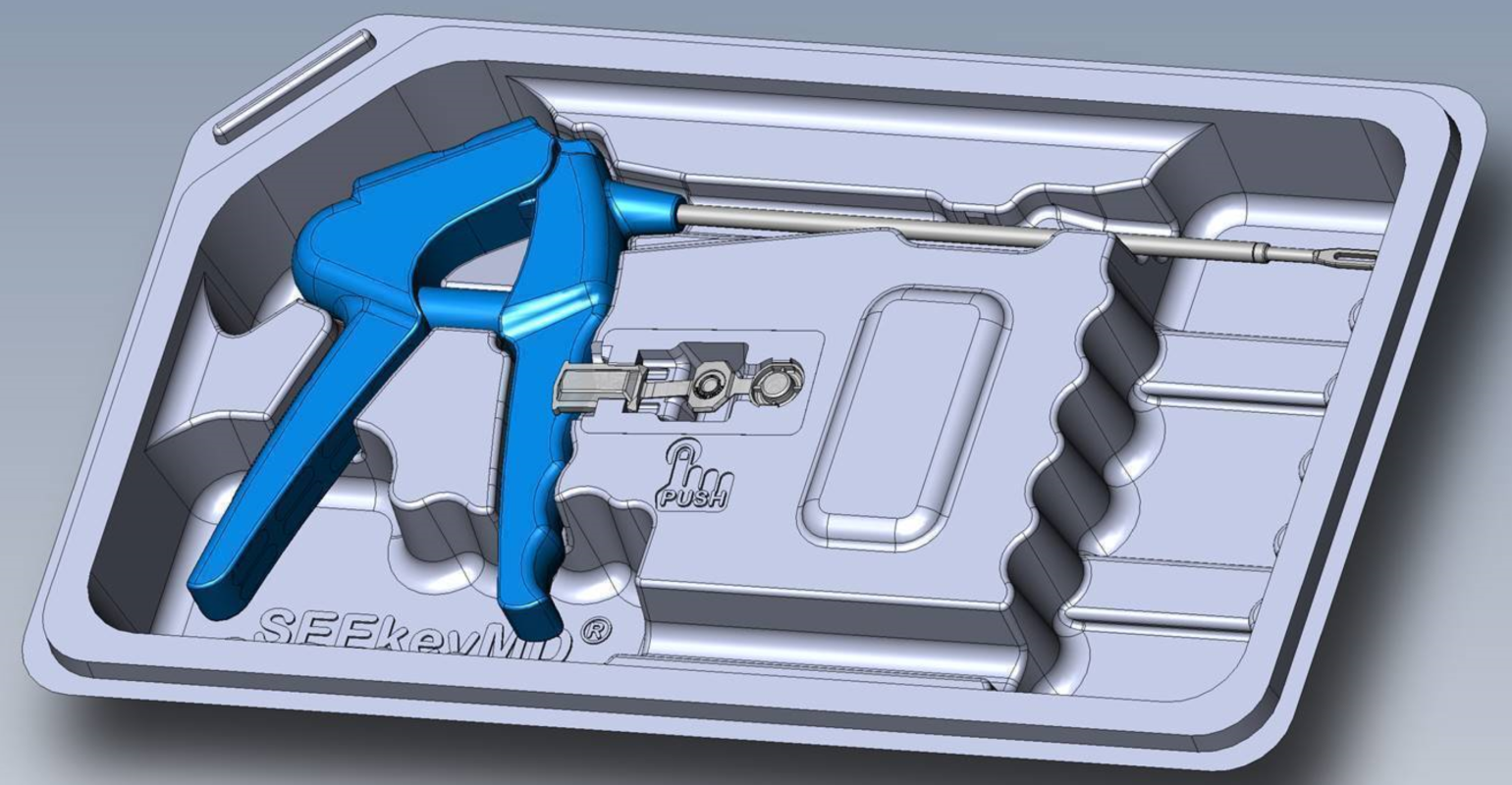 Image of the SEEkeyMD courtesy of SEE Forming LLC
Thermoforming experts have developed a packaging design that offers a new way to secure—and release—medical devices in rigid trays.

Undercuts are often incorporated into thermoformed trays to hold medical devices with a “snap fit.” But as useful as undercuts can be in securing items within trays, working with them can be “a frustrating process for engineers and clients alike, largely since they can’t be measured, resulting in numerous sample modifications and stretched timelines,” Scott Sadowski, managing director of SEE Forming LLC, told MD+DI. So he and Mark Erickson (engineering director) developed an alternative, drawing on their decades of experience in consumer, food, and medical thermoforming.

“In my 27 years working in engineering and sales, undercuts were my nemesis, and I often thought, ‘There has to be a better way,' ” he said. “I’ve departed many meetings unsure of how to adjust a sample because a consensus could not be reached when searching for the elusive ‘perfect’ snap fit. Some would say the device was ‘too tight;’ others ‘too loose.’ I went through this process so many times with one engineer that he named the process “Goldilocks,” saying, ‘Here we go looking for Goldilocks. Then when we find her, we will lose her and start a new search when we buy the multicavity tool.’ ”

Sadowski said this engineer “was referring to a trend seen often: The customer approves and tests a single cavity with a specific undercut size but adds additional cavities when purchasing a production tool. This makes ejecting more difficult, increases warpage, and decreases run-speed. Manufacturing is then left to mitigate these problems and often reduces the pre-approved undercut size, thus reducing the locking force. (‘Losing Goldilocks again.’) At this point the customer is warned that the plastic flow will be different [fom] the original approved sample. Because the project has had so many delays by this point, the customer often feels pinched for time and is forced to settle for a less-than-ideal snap fit.”

Sadowski was also frustrated with the attribute check process for undercuts. “During this check, a person pushes a device in and out of the snaps and then checks either ‘pass’ or ‘fail.’ This causes wear not only to the test devices, but to the tools as well,” he explained. “When working as an engineer in the thermoforming market, I remade many tools because the undercuts themselves would wear the mold material. The thermoformers I worked for experimented with many other metals and hard coatings but never found a way to stop it. The polling session at HealthPack 2019 revealed 83% of medical device manufacturers (MDM) do not revalidate a package after approval. It’s absurd that the most important feature of a tray can't be (or isn’t) quantitatively measured, is known to wear, and is seldom revalidated.”

An alternative to the snap fit was in order. Sadowski and Erickson developed SEEkeyMD, a packaging system consisting of a thermoformed mold insert and an injection molded plastic key that securely locks a device into a rigid tray and can be released with the push of a finger.

The design also enables development of standardized tooling. “The capture-length of the key is seven times longer than traditional undercuts, making more universal trays possible than ever before,” Sadowski explained. “For trays that fit the basic requirements of this innovative system, one key fits all. The elimination of covers, polytubes, and foam inserts significantly reduces shipping and warehousing, while improving risk mitigation.”

The minimum thickness of the base tray is also consistent. “SEE Forming raised the key locks to the highest surface to utilize the thickest/strongest area of the form to hold the key. Using our mold insert, the draw-ratio is always the same, thus the material minimum is predetermined by the selected sheet thickness,” he said. “In contrast, the draw-ratio of a traditional undercut is never the same because the material usage above and below a snap undercut has more linear inches, which causes severe thinning.”

SEE Forming has contracted two companies to manufacture the eight mold inserts for an off-the-shelf item. “We also contracted a Class 7 injection molding company to manufacture the one-size-fits-all SEEkeyMD,” Sadowski explains. “This, too, will be an off-the-shelf item, and we will ship as soon as the order arrives. Initially we thought the MDM would load the keys much like they currently do with covers, polytubes, and foam protectors. However, MDMs are requesting for the keys to be preloaded as it speeds up assembly, eliminates space requirements, and eliminates the need to locate additional products (i.e., covers) from other boxes.”

Sadowski’s team didn’t want to hand-off labor for preloading the keys, so they worked with a couple of automation engineering firms and modified the design so the keys could be nested for a cobot to pick, insert, and retract it in each base tray. “In the redesign, an additional benefit was realized where the keys could be used to replace the stacking lug undercuts of the base trays,” he said.

SEE Forming has tested the design with a number of people. First, the packaging system was shared with a dozen people from the general public who were unfamiliar with medical devices, and Sadowski said they were easily able to release the devices from the trays. Next, the company met with 12 nurses from 8 different hospitals. “All recognized how the device was held, but five simply slid the key back with their finger instead of using the push feature,” he said. “Once the push feature was demonstrated, 100% used it correctly on subsequent packages and preferred it to other packaging methods. At this point we took samples to HealthPack for four additional nurses’ opinions, which brought the same results.

“Demonstrations of SEEkeyMD prove to be well received as innovative and unique to traditional methods,” he continued. “When presented to nurses, they studied it, used it, and then reinstalled and released the device multiple times; their interest peaked. I have yet to see this response with either of the traditional methods; they simply push the packages aside and move on. After about five minutes nurses consistently began discussing where and how SEEkeyMD would be useful in other applications. Many groaned when referring to snap undercuts, and also commented about how much material waste could be reduced by eliminating covers and switching to the new system.”

MDMs concerned about cost may be able to justify the added expense. “If a retainer is of consideration, we simply compare the weight of their current tray to our 1-gram key. Even if three or four keys are needed, the plastic usage will be significantly less,” he said.

He pointed to a potential customer’s case as an example. “One MDM is comparing SEEkeyMDto their current tray/cover project. The cover has a weight of 135 g, which we successfully sampled using four 1-g keys. The plastic reduction of 34X will save over $200K, will eliminate over 20 tons of plastic from the environment, and will eliminate 60 pallets being shipped and warehoused. Furthermore, the cost to install the system using SEEkeyMD is one quarter of a cover forming tool. It’s even easier to compare a polytube or foam insert, by subtracting the cost of our key(s) from the cost of ancillary items. However, the SEEkeyMD benefits are further realized when it is adopted across multiple SKUs, as a better price is realized with more volume.”

Interestingly, the company’s biggest hurdle may not be price, but rather the "diffusion of innovation theory," Sadowski said. “This theory states there is a very small segment called ‘early adapters’ who will become the leaders within an industry. They must have a problem, be aware that they have it, and be actively seeking a solution,” he said. “If one of these three criteria is missing, they will have a difficult time seeing the vision and associated benefits and will miss out on the innovation. This is because it’s easier to associate risk to new ideas.

“Even the best innovations had people and companies that rejected them because they could not see outside of the box of familiarity,” he added. “A great example of this is the bread slicing machine within the food packaging industry. People thought it was unnecessary because the consumer all had knives at home and could cut their own bread. After 16 years of offering the machine to bread companies, people came around to the convenience, safety, and savings of having pre-sliced bread, making “Wonder” known as a leader in the industry.”

Sadowski said SEE Forming is already “finding applications where engineering needs device security, corporate agendas mandate sustainability, and quality is requiring quantitative measurements to reduce risk. The benefits of this innovative system speak for itself. It’s also just a matter of time before the “risk of innovating” is outweighed by the risk of failing to realize the benefits incurred through the cost savings, plastic reduction, risk mitigation, shipping and warehouse storage, elimination of ancillary products, improved device security, speed-to-market, and standardized tooling,” he said. “When was the last time you bought a loaf of bread that wasn’t sliced?”