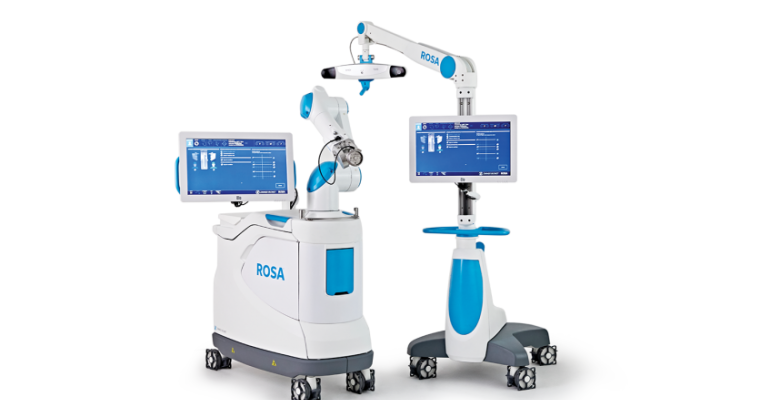 Zimmer Biomet reported seeing "real momentum" in 4Q19 from its Rosa Total Knee robotic system.
CEO Bryan Hanson said the company's funnel for Rosa placements is the strongest it's ever been and the surgical robotics system is expected to be a key growth driver for ZB in 2020.

The company that MD+DI editors recognized as the 2019 Medtech Company of the Year is off to a strong start in 2020, thanks in large part to its surgical robotics system for total knee replacements.

"We're not there yet," Hanson said during the company's 4Q19 earnings call this week, as transcribed by SeekingAlpha. "But the fact is we're definitely seeing traction in base knee as well. It's actually one of our best growth quarters in base knee that we've seen since the merge."

That said, there was no denying the CEO's enthusiasm during the call for the Rosa surgical robot.

"Rosa demand is very strong. We have ... the largest funnel right now for placements that we've ever had," Hanson said. "We've done over 2,000 procedures already. And again, we’re just a couple of quarters into this launch. So that would tell you that we're really seeing acceleration of focus in this area."

Perhaps the best indication of how well the robotic system is resonating in the field comes from what the company is hearing from surgeons who are performing knee replacement surgeries with Rosa.

"I had an opportunity to be out in the field and see a few cases, one particularly on the West Coast where I had a surgeon continue to look across the operating room and say, 'I couldn't do this before without Rosa' [as the surgeon was making] half millimeter adjustments in tissue balancing and getting real-time feedback in the procedure," Hanson said.

That enthusiasm from surgeons is driving more surgeons to want to get trained on the system, he said, and the company expects to continue to see that momentum going forward. He also said ZB is adding commercial infrastructure to support that momentum as well as adding significant training capabilities to make sure surgeons are getting trained with safe and effective use of the robot.

"It was great to see our competition have a really strong quarter as well," Hanson said. "That tells you that the uptick in robotics is real and that benefits all of us."

Robotics and Informatics will Get the Big Bucks

Hanson said ZB has done a good job of rethinking how the company deploys resources in terms of R&D and commercial infrastructure.

"We've really taken a hard look at the R&D pipeline, started to get more bias towards robotics and informatics and spend significantly more money, almost the mix shift that has occurred in those areas," he said. "It doesn't mean that we're not going to continue to do implants. But the fact is ... a good portion of that money is shifting towards Rosa, towards a mini robotics, towards informatics, towards efficiency in doing the procedure. So that was a pretty significant innovation shift for the organization because we think it could bring real value to the patient and the customer."

As a result of that, Hanson said, the company now has more in the pipeline in terms of Rosa applications in other areas, including partial knee replacements and hip replacements. He said those will likely come in 2020 but he declined to offer specific launch projections. Longer term, the company is also working on adding an application for revision procedures, which Hanson said is a challenging application to provide as it is also one of the most challenging procedures for surgeons to do.

"So if you could have robotic assistance inside of that, it would be attractive," he said. "But I don't want to give a view on timeline for that."