Pricing Pressures and Robotics Are at the Center of AAOS 2018 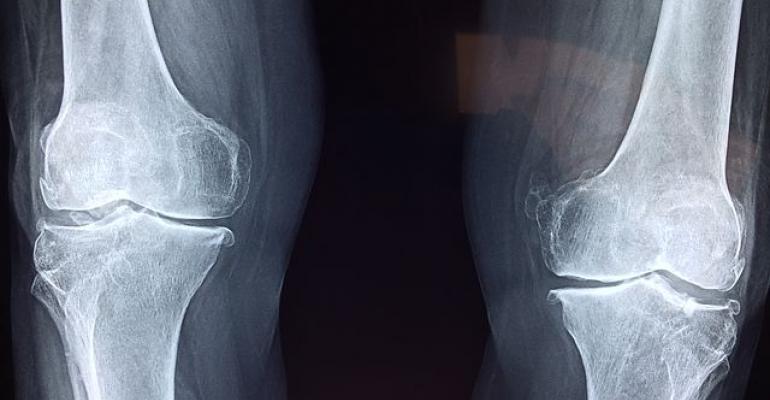 Robotics, pricing concerns, and the prevalence of more procedures being performed at ambulatory centers are some of the hot topics in the orthopedics market.

The annual meeting of the American Academy of Orthopedic Surgeons (AAOS), the largest gathering of orthopedic surgeons and manufacturers from across the U.S. and around the world, took place in early March in New Orleans. At this year’s meeting, a number of key trends were highlighted related to cost containment, the use of robotics and other enabling technologies, more procedures being conducted at ambulatory surgery centers (ASCs), and growth drivers in a number of sectors.

The need for pricing controls affects all healthcare markets and orthopedics is no exception. Every year at AAOS, orthopedic manufacturers display new products and provide physicians with the opportunity to evaluate new technologies. This year, however, attendees' enthusiasm for innovation was somewhat tempered given the focus on economics and cost containment.

While pricing pressures in the market have largely stabilized, hospitals continue to do whatever they can to control device costs. Approaches include vendor consolidation, capitated pricing, and the shifting of procedures to lower cost sites, such as ASCs. Companies will also be encouraged to continue developing easier- to-use products specifically for ASCs.

Movement to ASCs is slower than expected

The movement of procedures to the ASC setting, while at a slower rate than generally anticipated, is being driven by the continued focus on value-based care initiatives. Although the Trump administration repealed the mandatory bundled-payment models developed during the Obama administration, it created a new voluntary model in January 2018. Under this model, practitioner payments will be based on quality performance during a 90-day episode of care in one of 32 areas, including inpatient and outpatient care in large joint replacement procedures as well as spinal fusion.

Robotics will play a prominent role

Several companies showcased their robotic offerings at the meeting and surgeon interest was high, reflecting recent market momentum and supporting the belief that robotics will play an increasing role in orthopedics going forward (Table 1). Robotic systems can improve outcomes for patients by supporting surgeons through:

In particular, robotics is a notable driver in the knee and spine markets where hospitals are increasingly using robotic systems as a marketing tool to differentiate themselves and attract patients.

Disruptions caused by hurricanes Harvey, Irma and Maria led to procedure cancellations and lower activity levels in the third quarter of 2017. However, as demonstrated in the chart below, sales returned to previous growth levels during the fourth quarter of the year. 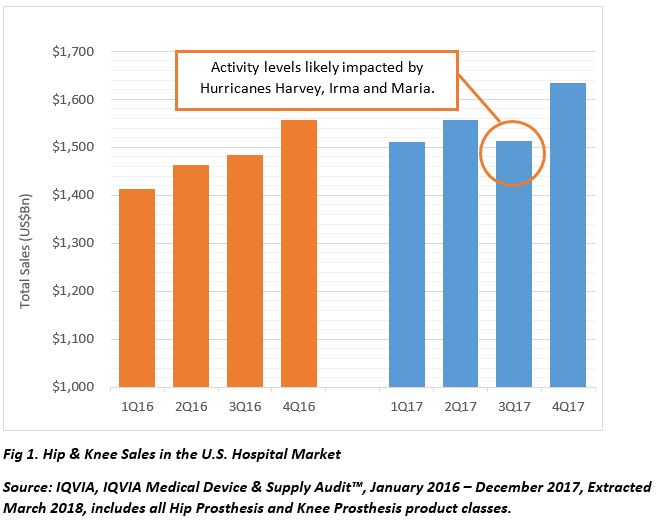 The extremities market remains the fastest-growing sector in orthopedics, increasing by 7 to 10 percent in 2017. Shoulder and ankle offerings are the largest segments and will continue to be the primary drivers of market growth. Specifically, within the shoulder market, growth will be driven by the continued shift from anatomic to reverse shoulder arthroplasty and the proliferation of stemless systems. In contrast, growth the ankle market will be led by enhanced reimbursement for total ankle replacement and revision procedures as well as continued expansion into podiatry and younger patient populations.

As we move through 2018, the emergence and uptake of new devices and technologies in the orthopedics market will continue to change outcomes for patients and drive overall market growth. As pricing pressure continues, manufacturers of these new technologies must remain aware of the need to demonstrate economic value.