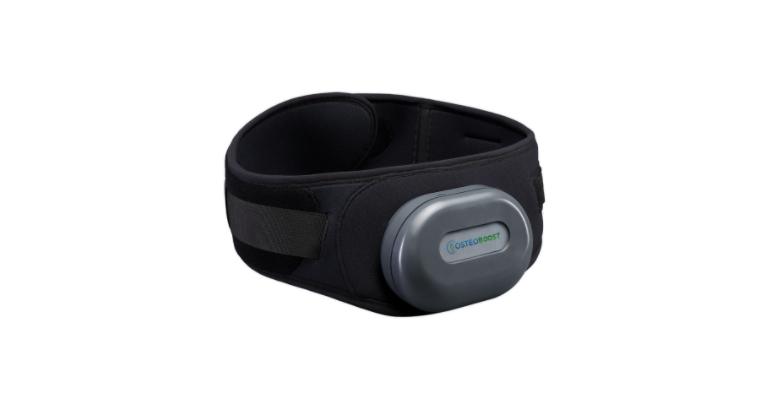 Bone Health Technologies was recently granted a breakthrough device designation from FDA for its OsteoBoost Vibration Belt, a drug-free alternative for improving bone health and reducing the risk of fracture.

After bone density peaks, typically when people reach their 30s, most experience a slow decline from bone cells dying and being resorbed without being entirely replaced, said Laura Yecies, CEO of Bone Health Technologies, in an interview with MD+DI. “And now that we're living longer, that slow loss of bone catches up to us to the point where the bones can become very fragile, and then we have fractures that can be deadly and life-altering,” she said.

NASA extended this research, studying the use of whole-body vibration technology for its astronauts, who were at risk of losing bone density in a zero-gravity environment where their bones were not subjected to even the force necessary to walk. NASA’s system consisted of a vibrating plate that a person would stand on with their knees locked to prevent or reduce attenuation. Attenuation refers to the dissipation of the vibration as it travels up the body.

Bone density improved for people who complied with the treatment. “That was a pretty significant finding,” Yecies said. However, she noted that compliance was not ideal, due to the amount of time needed to stand with knees locked and the plate’s high cost.

Yecies said her company saw this research and the issues surrounding it, and wondered how they could use vibration more effectively, especially targeting the hip and spine. “Hip fractures can be devastating—20 percent of people who break their hip die in the year following the hip fracture, and another 40 percent lose their independence,” Yecies said.

The company designed the OsteoBoost belt to be worn at the sacrum where the vibrations can be applied directly to the hips and spine. “We believe that the belt is both going to apply the vibration where it's needed, and also be very convenient, comfortable, and easy to use,” she said, noting that the frequency and strength of the vibration are specifically calibrated, based on the research from NASA.

“Very important,” Yecies said, “is that we confirm the level of vibration that is transmitted to the skeleton,” citing an example of two people--one very thin and one who has more fat deposits around their hips. “If the belt vibrates the same, the person with more body fat will have less vibration being transmitted to the skeleton.” Therefore, she said OsteoBoost has a calibration feature with an accelerometer that measures how much vibration is getting to the skeleton at the iliac crest. The measurement is completely dynamic, and the vibration is adjusted daily to accommodate for thicker clothing, for example.

OsteoBoost can be worn during almost any activity except sitting. “What we found in the clinical trial is that we have very high compliance rates,” Yecies said. “People even say that the device feels pleasant. It feels a little like massage. It's comfortable and it's pretty easy to incorporate it into your day.” It should ideally be used for 30 minutes a day, five days a week.

Anyone can use OsteoBoost, but postmenopausal women may benefit the most from the device. “One thing that I advocate for is knowledge about your bone density,” Yecies said. “Medicare pays for a DEXA scan, which is one of the most common tests for bone density at 65, but by then, it may be quite late to intervene,” she explained. “In the postmenopausal period, women will typically lose typically up to 20 percent of their bone density. This is as much as five or six percent per year that you're losing. We believe that we can cut that in half and slow it to two to three percent,” she said.

OsteoBoost was granted breakthrough device designation by FDA, and CMS has announced that Medicare will cover all breakthrough products for four years. “FDA agreed with our assessment that this is a significant unmet need and that there's nothing else on the market that is similar,” Yecies concluded.