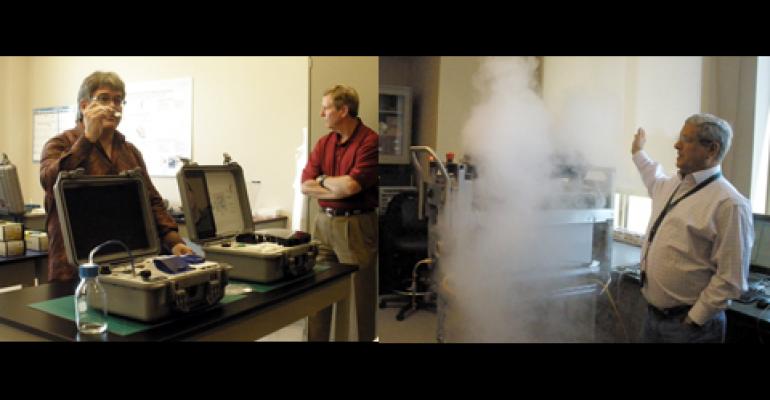 Residents of the center are given the space to innovate and create on a first-class campus.

There is no cookie-cutter approach to starting a business or entering the competitive healthcare market. At the Innovation Park at Notre Dame (South Bend, IN), companies are given the chance to exercise their skill and creativity on the same campus as one of the most prestigious universities in the country. That’s not a bad deal.
The model of the center is to provide a space for companies to innovate and then release them, rather than letting start-ups stay in the building for an extended period of time. Before walking in the door, every company has to pass a five-question-and-answer test online. After being selected, the company signs a short-term lease, most of which start at 60 days. Every lease has milestones to ensure that companies are efficiently using their time.
To provide ambiance that facilitates the three “C’s” of Innovation Park (connect, collaborate, and commercialize), CO2 sensors pump fresh air throughout the building and white noise ensures there’s no dead silence.
Despite being housed on a university campus, Innovation Park is a year-round business. It was founded with the goal of becoming the premier Catholic research institute. The 55,000 sq ft facility (the first of four anticipated buildings) opened last fall and is home to several start-up companies that aren’t necessarily in the healthcare field—however, those in the medical realm include AltaPure, Carex Technologies, and F-Cubed. During a recent visit to Innovation Park, MD+DI toured the site and met these three companies.
Carex Technologies specializes in providing a point-of care tool to aid in the transition of care between medical professionals. According to the Joint Commission, 98,000 deaths occur annually due to medical errors. And 70–80% of these errors happen as a result of miscommunication and the transfer of information, said Kali Devaraj, founder of Carex Technologies. This transfer of data happens between doctors, hospitals, nursing homes, and extended-living facilities on a daily basis. The problem is that during the information hand-off between healthcare professionals, gaps can occur in the process—and the results can lead to serious, even deadly, consequences.
The company announced its first client, a continuing care and retirement community, in May. It will be using Carex’s mobile platform called the Handoffs for Extended/Assisted Living (HEAL) system. When using the cloud computing system, nurses carry an iPad during their shift, allowing them to enter vital information into an electronic record immediately. When the new caregiver shift begins (the handoff), he or she has access to that same information (Note, the transition of information must be electronically accepted). The HEAL product was used in a pilot program involving congestive heart failure patients, resulting in a reduced return rate to hospitals.
The company is also in talks with the Community Foundation of St. Joseph County (Indiana), which is interested in funding six local nonprofit assisted living facilities to use the HEAL system for one year, according to Devaraj.
When in a hospital, one of the biggest concerns is hospital-acquired infections (HAIs). According to the CDC, 100,000 U.S. patients die each year from HAIs. That’s a multibillion problem, said Carl Riccardi, president of Altapure  (The CDC estimates HAI costs range $26–$33 billion annually). The company developed an ultrasonic platform that uses a 0.88% hydrogen peroxide concentration to rid a hospital room of high levels of bacteria in less than ten minutes, and the room can be reoccupied in 30 minutes. While a wiping method only kills 40% of bacteria, Altapure’s technology emits a dense fog that kills up to 90% (with an engine the size of a loaf of bread, no less), according to Riccardi. The company has spent $5 million to develop technologies over five years, with most of this money going towards developing the small engine for its current unit. In the meantime, Altapure also has patents pending for four to five different products. In addition to using the machine in healthcare, the company is taking its technology to the military and agriculture industries.
A company called F-Cubed LLC was the final stop at Innovation Park. It is developing a portable device that uses a unique biochip to detect DNA and other molecules in just 30 minutes. The biochip, which is created by Intel, is a small piece of silicon loaded with carbon nanotubes. Via the AC dielectrophoresis process, DNA is trapped, detected, and quantified in minutes. The rapid sample preparation device doesn’t use reagents; it uses phosphate buffered saline (salt water). The technology has potential in detecting methicillin-resistant staphylococcus aureus (MRSA), pseudomonas, and bacterial meningitis.  Regarding the MRSA application, F-Cubed has received IRB approval and is preparing for FDA submission. It is also talking to the Cleveland Clinic about participating in an IRB for its bacterial meningitis application.
Maria Fontanazza is managing editor at UBM Canon. Follow her on Twitter: @MariaFontanazza.
0 comments
Hide comments
Related