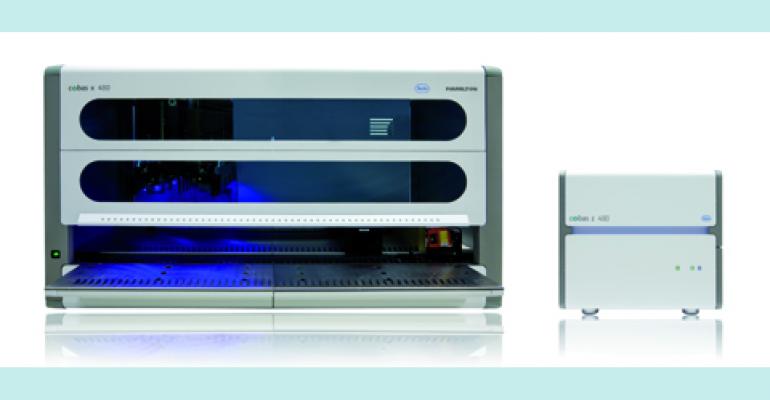 In just 10.5 months, Roche secured FDA approval for its human papillomavirus (HPV) test—and that’s a record for any HPV test today, says Christoph Majewski, head of HPV at Roche Molecular Diagnostics (Pleasanton, CA). The Cobas HPV test is the only FDA-approved test that performs 16 and 18 genotyping simultaneously with high-risk pool testing of the other 12 HPV genotypes.

The Centers for Disease Control and Prevention (CDC) estimates that about 20 million Americans are currently infected with HPV and an additional 6 million are infected annually. Nearly 12,000 U.S. women are diagnosed with cervical cancer each year, and HPV is suspected to be responsible for a large number of these cases.

Roche’s Athena clinical trial showed that 1 in 10 women, age 30 and older who tested positive for HPV 16 and/or 18 with the Cobas test, had cervical precancer despite receiving normal Pap test results. “By providing simultaneous 16 and 18 genotyping, doctors will be able to make immediate decisions about which women are at the highest risk for cervical cancer and therefore should be followed up with immediately,” says Majewski. “We hope that 16 and 18 genotyping will become the new clinical standard in cervical cancer screening, which is preempted by the guidelines that AACCP [American College of Clinical Pharmacy] had issued a few years ago. We hope that by providing this type of testing, we may be able to reduce the rate of cervical cancer further in the population.” Majewski also anticipates that the test could lead to earlier identification of genotype 18, which frequently leads to adenocarcinoma, a cancer that is often underdiagnosed. The fully-automated Cobas 4800 platform provides sample preparation, amplification of target DNA by a polymerase chain reaction and nucleic acid hybridization to detect 14 high-risk HPV types. The assay allows the lab to obtain four different results (12 high-risk HPV genotypes, genotype 16, genotype 18, and beta-globin) from one sample at the same time.

Majewski explains the two patient populations for this test. “In the United States, there are predominately two algorithms that are recommended by the clinical opinion leaders. One is ASC-US triage—the follow up of an equivocal cytology with an HPV test in women. This algorithm is recommended for women between 21 and 30 years,” he says. One of the concerns within the medical community has been that when cotesting younger women (the prevalence of HPV is high in this population), many samples turn out to be positive and result in unnecessary follow up. Majewski believes that the results of the Athena trial prove that in the future, 16 and 18 genotyping could help prevent this issue.

“The second algorithm recommended is basically the adjunct testing, which is the simultaneous use of HPV and cytology. That algorithm is recommended for [women] 30 years and above,” says Majewski. “Both age ranges are offered in our labeling and packaging inserts, because the assay is [FDA] approved for both of these applications.”

The company has high expectations for the success of the test, which will be available at its warehouse on May 1. Although there is additional market opportunity for the test overseas (the system received the CE Mark in December 2009), the biggest potential is in the United States, where currently 80–90% of HPV testing occurs, according to Majewski. He estimates the U.S. market for Roche’s test to be about $300 million. The Cobas 4800’s competitors in the HPV testing market are Qiagene’s Digene HC2 HPV DNA test and Hologic’s Cervista test.