When a company decides to redesign a product after 14 years of production, the smart move would be to look for advice from customers, staff, and even materials suppliers. In redesigning its Mahurkar dual-lumen catheter, Kendall Sherwood–Davis & Geck (Mansfield, MA) did just that. The catheter is used in hemodialysis, aphoresis, and infusion procedures, and is inserted into major arteries. As a result, the company sought a new resin that could meet all the critical needs of the catheter in terms of biocompatibility and sterilization. And, as the device is commonly sutured in place through a rotatable suture wing that attaches to the catheter hub, it was important to select a resin that met all rigidity and durability criteria. To make sure it found a resin that would do the job, the company invited the catheter's long-standing resin supplier, the Bayer Corp.'s Polymers Div. (Pittsburgh), to join in on the product's redesign. 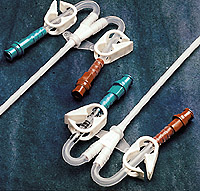 "It's not often that you get to redesign an older product like this," says Michael Hillson, senior manufacturing engineer for Kendall Sherwood–Davis & Geck. "We wanted to do it right and felt that Bayer had to be involved, too." The two companies worked together throughout the process, from initial planning stages to material selection and molding trials. Bayer's involvement included opening the doors of its Application Development Center to design engineers from the OEM, giving them a chance to work side by side with Bayer's material specialists. Technicians from the resin supplier evaluated samples of the catheter hub and recommended improvements to the part design, mold design, processing, and assembly. In addition, Bayer developed new guidelines to improve the bonding of the catheter's implant length to the catheter hub. As Hillson notes, Bayer's help freed up his time, allowing him "to focus on part design, rather than on the material's quality, and it significantly expedited development. We had a new part design and a new mold, and we tested parts within six months."

During the resin selection process, Bayer provided the OEM with long-term aging data on its ABS resin, Lustran ABS 348. In addition, Kendall Sherwood–Davis & Geck ran its own series of tests, including drying a sample for 100 hours, as opposed to the normal 3-hour drying period. As the company found, the overdrying did not significantly affect the resin's properties or processing, and parts molded with the overdried resin met the OEM's demanding quality standards. As a result, the company decided to use Lustran ABS 348 in the redesigned catheter. 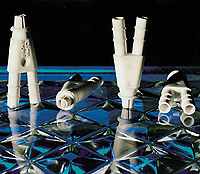 To complete a redesign of its dual-lumen catheter in only six months, Kendall Sherwood–Davis & Geck sought the assistance of Bayer Corp., Polymers Div.

In addition to thermal stability during processing, the resin combined a balance of physical properties, intermediate-abuse resistance, and rigidity. It is sterilizable using radiation or ethylene oxide and meets the biocompatibility requirements of the FDA-modified ISO 10993, Part I. The redesigned catheter hub, which connects two catheter tubes to the implant length, is processed in two-cavity molds in the OEM's own facilities. The hub's wall sections range in thickness from 0.015 to 0.225 in.

As Kendall Sherwood–Davis & Geck found, though, the resin was up to the task. The resin runs clean in complicated tooling, and produces no significant variation in the parts produced. As Hillson says, "The Lustran ABS 348 is a very forgiving material in that parts are extremely consistent." Using the resin, the company can run molds five days a week, 24 hours a day, cost-effectively producing a high volume of the new catheter without worrying about material quality.