Designed for medical tubing, a coordinated, fully programmable coiling machine allows quick coiler response. The dual-axis, ac servo drive system allows for ratios in excess of 2000:1. The dual-axis servomotor-driven spindle and traverser provide quick computer communication between these two axes, allowing not only the closing of the velocity loop on the drive, but also the closing of the position loop. This enables the traverser to place the extrudate in a precise circumferential pattern at the flange with either instantaneous or delayed traverse patterns. Because the coiler is a software-based system, any conceivable traversing pattern that may be required can be entered into the system either from the manufacturer or in the field. This requires only the replacement of a memory chip in the controller. Vulcan Machinery Corp., 20 N. Case Ave., Akron, OH 44305. 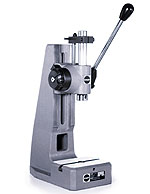 The stroke-return lock on an assembly press ensures that every time a manual assembly or pressing operation is performed, the selected ram stroke has been completed by the operator within ±0.002 in. The ram-locking mechanism prevents a partially completed assembly by not allowing the ram to be returned to its fully retracted position should the operator inadvertently cut the ram stroke short. Thus, the assembly cannot be removed from the nesting fixture and the operator is forced to move the press arbor to its full preset position. Schmidt Feintechnik Corp., 230 Executive Dr., Cranberry Township, PA 16066.

A dispenser feeds and cuts strips of cohesive tape for the assembly and packaging of medical devices. The tape length is set using a dial knob on the side of the machine. When the operator pushes a button to cut the tape, the dispenser automatically feeds the next piece. It uses 120/240-V line voltage and requires no air. An optional tape cradle and a foot-switch control are available. Special electronics for conversion into batch mode are also available for continuously producing large quantities of strips. S-Y-M Products Co., P.O. Box 112160, Stamford, CT 06911. 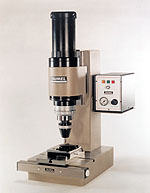 An orbital head-forming machine is used for product assemblies not using fasteners. Machined, semipierced, die-cast, or molded studs, pins, tabs, and bosses are flared out to secure the mating part without using rivets, screws, or other fasteners. There is no need for separate hardware. Blanked ridges, protrusions, and integral projections of malleable material, including stainless-steel grades and many thermoplastics, can be formed out to anchor components in position. The Model T-321 features precisely controlled and infinitely adjustable cycle time (speed) and heading pressure. Taumel Assembly Systems, Rte. 22, Robin Hill Corporate Park, Patterson, NY 12563. 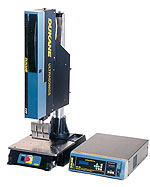 When interfaced with the manufacturer's Dynamic process controller, the Model 220 assembly system allows the user many options of control and functionality that can be customized to meet the needs of specific assembly applications. The Model 220 is available as a thruster system, which can be interfaced with custom and automated assembly systems, or it can be assembled with a press support package and an ergonomic base as a manual-press system. Dukane Corp., Ultrasonics Div., 2900 Dukane Dr., St. Charles, IL 60174. 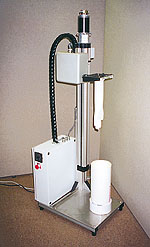 A dip-molding and dip-coating system is useful for small-scale production and research formulation work. Compared with an earlier model, Navigator II features an expanded table for larger tanks, rugged construction, and a control system with software design incorporating the use of Microsoft Basic. In addition to vertical axis and pallet rotate motion, the system can also be supplied with former axial spin. ACC Automation, P.O. Box 569, Akron, OH 44309.

Cost and design time for special applications in the manufacturing arena can be prohibitive for companies seeking to automate assembly and testing for part or all of their production processes. A manufacturer of custom automation machines uses modular automation to reduce such delivery lead times and costs. It has designed and used many units, such as pick and place, adhesive dispensing, fastening, staking, welding/soldering, drilling/tapping, and leak testing, which can be integrated into a system, thereby reducing the design and build time. The company says that this is not a quick shortcut fix for special machines. Rather, it means that much of the basic preliminary tasks do not have to be repeated, thereby reducing costs and fabrication time. Automation Engineering & Manufacturing Inc., 834 S. Sherman St., Longmont, CO 80501.