A New Treatment Option for Women

A New Treatment Option for Women

The statistics are alarming. Each year, more than 2.4 million American women suffer from menstrual disorders that compromise their health and quality of life. One such disorder, known as abnormal uterine bleeding (AUB), can lead to anemia and limit a woman's ability to work, exercise, or even leave her house.

Until recently, the only widely available and permanent treatment for AUB was hysterectomy, performed on 600,000 American women each year. Alternative options, such as drug therapy, dilation and curettage, and endometrial ablation (in which a laser, electrosurgical probe, or thermal balloon is used to remove the uterine lining) were proving more cost-effective and less invasive but were often less reliable.

One promising option was endometrial cryoblation. In this procedure, a flexible, slender probe that generates freezing temperatures is inserted into the uterine cavity to destroy the endometrial lining. Although the treatment was promising, the accompanying technology was not. Existing devices were large, expensive, worked on high operating gas pressures, required refrigerant replenishment, and could not efficiently maintain low temperatures. These factors made the treatment cumbersome, inaccessible, and expensive.

John Dobak, MD, founder and chief technology officer at CryoGen Inc. (San Diego), was convinced this method could be improved upon. Dobak was inspired by an article in NASA Tech Briefs magazine. The article discussed the use of micro-miniature heat exchangers for achieving cryogenic temperatures in a catheter-based approach for cardiology applications. Dobak believed the same technology could be applied to endometrial cryoblation systems to create a more compact device that would effectively deliver the low temperatures needed. 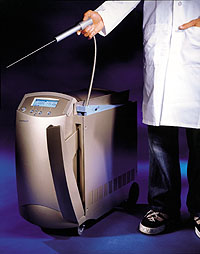 CryoGen Inc. hired Bridge Design to create the console and treatment probe for the First Option system. A hideaway compartment houses the treatment probe when it's not in use.

The First Option system consists of:

The procedure is typically performed in 15 minutes on an outpatient basis, under either local or general anesthetic. Patients can leave after a few hours of rest and usually return to normal activities the next day. The procedure costs $2000–$3500. By contrast, hysterectomy generally costs $11,000 and requires a three- to four-day hospital stay and up to a six-week recuperation period.

First Option uses a mixed refrigerant Joule-Thomson staged system developed by Dobak. The fluid mixture and linear oil-free compressor enabled the working pressure of the device to be reduced and allowed the mixture to circulate, eliminating the need for replenishment. The closed-cycle refrigerant gas system achieves probe surface temperatures of –90° to –110°C at working pressures of up to 400 psi. This system enabled designers to create a smaller, more portable, less expensive device. Because the proprietary refrigerants are recyclable, costly gas canister replacements and a refrigerant recovery system are eliminated, says Gene Reu, vice president of engineering for CryoGen.

Teamwork was the key to developing First Option. To develop a reasonable prototype in a short period of time, CryoGen engaged the design and development firm Bridge Design Inc. (San Francisco).

"We pursued outsourcing activities to speed the product development effort. We had a couple of key areas of the system that had to be developed, such as the console and user interface," Reu says.

"CryoGen needed a company that could understand all of the issues involved," says Bill Evans, Bridge president. "The fact that we are an ISO 9000 company was a factor as well. They really needed someone who was a team player."

For Bridge, the main challenge in designing the First Option console was the fact that designers basically had to start from scratch. "What you tend to see are products that are variations on existing products. That's a lot easier than the effort it takes to create a new platform technology. You're pretty much starting with a blank sheet of paper," Evans says.

The goal was to create an end product that was highly portable and easy to use yet attractive to enhance marketability. "We helped them get good looks into a product with high function to ease market acceptance of the new technology," Evans says.

The final product is 30 in. tall x 15 in. wide x 28 in. deep. Previous systems were the size of a refrigerator, Evans notes. First Option consists of recyclable materials, mainly plastics and aluminum. The external panels can be easily removed for service access, enabling critical maintenance of the compressor and umbilical probe line, which have to be field replaceable. Other internal systems are modularized for ease of service. The console conceals the treatment probe and cables in a pop-up compartment when not in use, and features a foldaway handle for easy maneuvering.

First Option is currently being produced in low to medium volume (hundreds per year) with a high unit cost because of its expensive core technology. The product, which has been in clinical trials since mid-1998, recently has been released to targeted reference sites, Reu says.