Minimally invasive surgical procedures are popular with physicians, patients, and insurance providers alike, since they all reap the benefits of decreased tissue trauma, lower infection risk, and shorter hospital stays. Device manufacturers, encouraged by the success of existing less-invasive techniques, are eager to expand the applications of these technologies. Some suppliers, in fact, are even researching ways to use less-invasive therapies to support critical procedures that still require full surgical intervention. 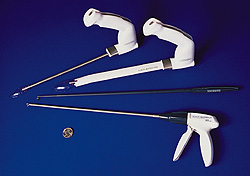 One such manufacturer, Ethicon Endo-Surgery Inc. (Cincinnati), recently began investigating how to apply less-invasive techniques to coronary-artery bypass surgery, focusing not on the actual bypass but on the removal from the patient's leg of the great saphenous vein, which is commonly used to reroute blood from the aorta to the coronary artery. In conventional procedures, the vein is removed through an open incision, which sometimes extends from the ankle to the groin. The result is a long scar, often accompanied by prolonged pain and a worrisome risk of infection. With roughly half a million such procedures being performed every year, the market seemed ready for a safer and gentler alternative.

Ethicon engineers set out to develop a new technique and disposable instrument to remove the saphenous vein endoscopically. The procedure would involve from one to four 1-in. incisions in the leg, through which endoscopic instruments and fiber-optic scopes could be inserted to locate, dissect, and extract the healthy vein. "We had various ergonomic issues to keep in mind when considering the structure of the instruments," says Gary Knight, Ethicon senior design engineer. For example, the procedure would require the simultaneous use of several components, which therefore had to be relatively simple to manipulate. The instruments also had to be long and thin enough to fit through the small incisions, but strong enough to withstand the force applied by the surgeon. In addition, all components had to be smooth, with no sharp edges that could damage the vein. Obviously, such a demanding design placed severe restrictions on the types of materials that could be used. Performance and reliability would be critical, although cost had to be considered too. Knight also wanted materials that would accommodate future refinements to the device design.

Faced with a difficult task of materials selection, Knight turned to Dow Plastics (Midland, MI) for some professional advice. "We had plastics in mind from the outset of this project," says Knight. "And because Dow Plastics is part of our Supplier Alliance program, we felt confident turning to representatives from Dow for their materials expertise and technical guidance." Discussions focused on how Ethicon could incorporate standard engineering plastics into products that must compete in a high-end, value-driven business. "Ethicon presented the design ideas and goals for each component, and from there we were able to discuss materials options," says Karen Winkler, senior applications development engineer for Dow Plastics.

The Heart of the Device

The team began with what Ethicon calls the Subcu-Dissector and Subcu-Retractor, ancillary instruments inserted through incisions in the leg to create and maintain operative space in the subcutaneous tissue. Knight was particularly concerned with the instruments' operating tips and manipulating handles. To be effective, the handles had to be strong and comfortable to hold while accommodating a variety of optical scopes, which would be inserted through them. "The internal portion of the handles contained a good deal of intricate structural ribbing," says Winkler; they therefore required a strong, easily molded material.

Winkler suggested Calibre polycarbonate resins with a glass filler, citing the materials' rigidity, strength, and good flow characteristics. Calibre MegaRad polycarbonate resins were evaluated for use in the transparent, spoonlike tips because of their strength, their resistance to gamma sterilization, and, most important, their good optical properties, which would allow the surgeon to see the position of the vein clearly at all times. Winkler also recommended Pellethane polyurethane elastomers for the scope-holding clip inside each of the handles "because they provide the flexibility necessary to hold the different scopes in place throughout the procedure."

Having specified the materials for the enabling instruments, the team turned its attention to the primary device, the Vessel Dissector, which dissects the saphenous vein from connective tissues. Because of the component's 20-in. length, initial discussions involved a design made from both metal and plastic. "Many complicated issues arose as a result of the initial design," says Knight. "How would the instrument be assembled? How would it be disposed?"

The final component in Ethicon's device--the Allport Clip Applier--would perform the delicate task of clipping the branches of the saphenous vein to permit its removal. The unit releases spring-loaded titanium clips that remain in place permanently. The handle is similar in design to the handles of the Subcu-Retractor and Subcu-Dissector, and contains intricate internal ribbing; therefore, Calibre resins were an obvious choice for this handle as well. The rotation knob, which is attached to the handle, was also made with Calibre polycarbonate.

A Leg Up on the Competition

Only 18 months elapsed from the initial meeting about the procedure and instruments to product commercialization. "Timing was definitely an important factor for us," remembers Knight. "We wanted to get the initial designs into the marketplace quickly so we could get feedback from the surgeons and optimize the instruments as they were actually being used. Disposability was another key element," he continues. "Because the procedure is so new, we will most likely be making improvements to the instruments over the next several years. We can make those changes much more easily and cost-effectively with a disposable plastic design. In fact, we determined that a reusable metal design would cost up to 10 times more to produce and maintain."

Knight adds that surgeons feel confident using the plastic instruments thanks to their light weight and reliability under limited use. In fact, Ethicon hopes that within a few years, the endoscopic procedure will replace the traditional vein-harvesting method altogether.

Knight attributes the success of the instruments to the effective teamwork between Ethicon and Dow Plastics. "Dow representatives were with us from the start," he says, "discussing materials and providing the support we needed to develop and introduce the innovative components into the market quickly and competitively. This project is a direct result of the valuable professional relationship we share."