Global concerns about depleting the ozone layer have forced industry to find alternatives to chlorofluorocarbons (CFCs) in manufacturing. For Cardiac Control Systems (Palm Coast, FL), a manufacturer of cardiac pacing systems and components, finding a CFC substitute for degreasing parts was critical.

Prior to the phaseout of CFC solvents, Cardiac Control Systems operated a small vapor degreaser using CFC-113 to remove light fingerprints and soils from component parts and packaging material. The company used the system to clean components made from stainless steel, titanium, silicone, polyethylene, PTFE, and other materials. Parts such as gold ribbon conductors that are to be spot welded are cleaned during production, and even polybags used to hold parts are cleaned to remove dust and particulate matter.

Searching for the Optimal Method

The company began researching alternatives to CFC cleaning in 1996, initially adopting a two-fluid advanced vapor degreasing (AVD) process while continuing the search for a single-fluid system. Although the AVD process worked well, it required that parts be immersed into the cleaning fluid. Also, the method's operating temperature was too high for some parts that were cleaned during manufacturing. 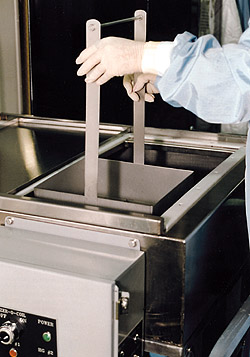 With the assistance of Petroferm Inc. (Fernandina Beach, FL), a cleaning specialist and supplier of cleaning solvents, and 3M (St. Paul, MN), Cardiac Control Systems decided to test a single-fluid vapor degreasing process using 3M's HFE-7100. The hydrofluoroether (HFE) is listed in the Environmental Protection Agency's New Alternatives Policy as acceptable without restrictions for use as an alternative to ozone-depleting substances.

After Petroferm tested the cleaning process on sample parts, Cardiac Control Systems began gathering the extensive data necessary to validate the process and confirm its effectiveness. Once Cardiac Control Systems determined that the process was suitable, the firm decided to use an MLR-120 cleaning unit (Baron-Blakeslee; Long Beach, CA) and installed the system in its cleanroom production area. The unit, modified by Ultronix (Hatfield, PA), was previously fitted with an additional freeboard and a second set of refrigerant coils to minimize vapor loss.

How the Process Works

Many of Cardiac Control Systems' parts cleaned in the vapor degreaser are tiny metal components. "With the AVD process, parts were placed in the degreaser's liquid boil sump, which requires that these components be contained in covered mesh baskets to prevent displacement by liquid flow," says Robert Consiglio, mechanical engineer, Cardiac Control Systems. "When the HFE method is used, parts are placed in a vapor zone instead of being immersed in a fluid, so the parts can be placed in open trays for the 1-minute cleaning cycle." After the parts are placed into the system for cleaning, vapor condenses on them. The condensate drains away contaminants and then evaporates and condenses on cleaning coils as the cleaned parts are withdrawn. Contaminant residue is filtered out of the fluid, which continuously recycles from liquid to vapor. A spray wand inside the cleaning unit can be used on surfaces that require slightly more aggressive cleaning actions.

Cardiac Control Systems found that the properties of the HFE fluid offered a number of improvements over CFCs. The boiling point of CFC-113 is 48°C, whereas 3M's HFE-7100 boils at 60°C. The higher temperature reduces emissive losses and aids in solvent action. The viscosity of the 3M fluid is 0.61 cps at 25°C compared to 0.68 for CFC-113, and its surface tension is 13.6 dyne/cm at 25°C compared to 17.3 for the CFC solvent.

The density of the HFE fluid, combined with its low viscosity and surface tension, allows it to penetrate and clean components with complex surface features. The low surface tension of the fluid allows for fast wetting of low-energy substrates, while low viscosity aids in the penetration of tight and complex geometries. This action is necessary for adequate cleaning, and it reduces fluid loss when the parts are removed from the degreasing unit.

The fluid's very low heat of vaporization leads to relatively rapid drying and minimizes liquid dragout from the system. The fluid has a shortened atmospheric lifetime and lower global-warming potential than CFCs and many fluorinated compounds. It is also low in toxicity, which complements its effectiveness as a solvent.

Training the unit operators to use the degreasing system efficiently was important, Consiglio says. "In order to minimize fluid loss, operators need to raise the parts baskets slowly after the cleaning cycle so that the fluid evaporates and recondenses fully on cooling coils rather than being brought out of the freeboard area," he says. A sliding cover over the two sumps is moved into place whenever the system is not in operation to prevent air turbulence from drawing out the denser cleaning vapor.

Cardiac Control Systems is also using the cleaning system instead of oven drying to remove water droplets from production equipment parts that are periodically washed in a water process. "Moisture is displaced by the condenser vapor and is ultimately removed from the system via the water separator," Consiglio says. "This vapor drying process saves both time and energy compared to oven drying."

Maintenance of the new cleaning system is minimal, Consiglio says. "Fluid disposal is not an issue because continuous filtration removes particulates from the operating fluid. The distillation process occurring in the machine ensures that clean fluid is constantly available for cleaning," he says. Because the HFE molecule is thermally and hydrolytically stable, it can be recirculated continuously in the cleaning system without deterioration.

"The cost of cleaning with the single-fluid 3M HFE process is comparable to earlier processes, and its performance is as good or better," says Consiglio. "Parts cleaned in the new system are free of contaminants and residue, and they meet our stringent requirements."