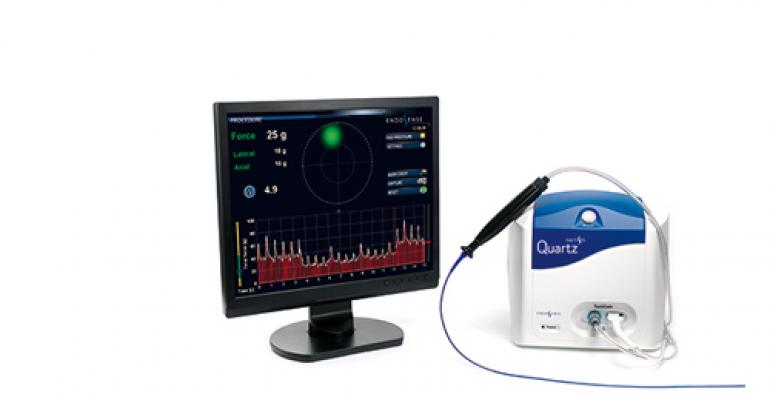 An analyst has previously described the force-sensing ablation catheter technology as the wave of the future for atrial fibrillation therapy because clinical data gathered thus far has been very convincing. Ablation catheters are thin, maneuverable wires that are used to treat the most common type of irregular heart rhythm -  atrial fibrillation. If untreated, AF can increase the chance for stroke, according to the National Heart, Lung and Blood Institute.

The TactiCath Quartz irrigated ablation catheter can tell physicians in real time how much force they are applying to a heart wall during a cardiac ablation procedure to repair cardiac arrhythmias.

This knowledge is important, St. Jude believes, because without force-sensing ability, physicians have to estimate how much force is being applied. Too much force can cause tissue injury and procedure complications, while too little force can lead to incomplete lesion formation, which essentially means that atrial fibrillation can recur down the road requiring a repeat ablative procedure.

Paroxymal AF is defined as at least two episodes of irregular heart beats that stop either by itself within 24 hours or in less than seven days, or through medical intervention.

The TactiCath approval brings to the U.S. market a product that was already approved in Europe. Johnson & Johnson also has force-sensing catheters and the approval allows St. Jude Medical to compete in the space.

“The number of patients with atrial fibrillation is growing rapidly in the U.S.,” said Dr. Vivek Reddy, director of electrophysiology at Mount Sinai Hospital, N.Y, in a St. Jude news release. “As the number of patients impacted by this disease continues to grow, it is important to develop treatment solutions that increase the efficiency and effectiveness of ablation therapies. TactiCath Quartz is an important advancement that provides critical information during ablation procedures.”