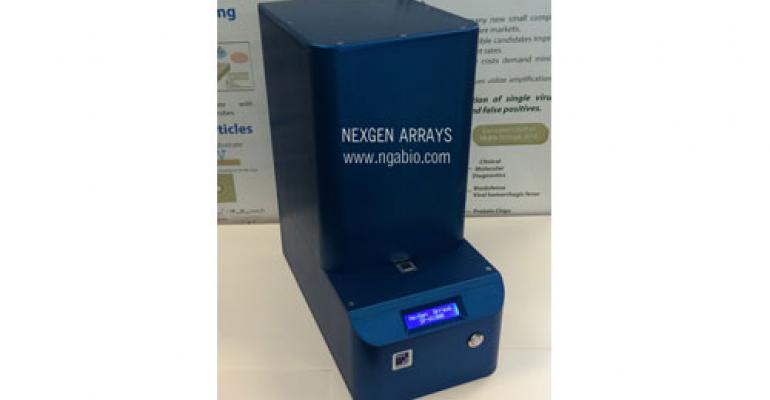 The development of new platforms and the adaptation of existing infectious disease tests are spurring progress in rapid Ebola detection technologies.

Responsible for almost 5000 deaths, the Ebola epidemic has ravaged West Africa and acted as a catalyst for global health initiatives. More recently, it has surfaced in the United States, prompting blaring, dramatic headlines and mounting fears of the dangerous disease. And with cases of Ebola—not to mention panic—on the rise, researchers and IVD manufacturers are scrambling for better methods of early detection and tests that yield faster results in order to slow the spread of disease.

SP-IRIS Label-Free, On-Site Rapid Diagnostic Test
A cross-functional team of researchers at Boston University (BU) has developed a prototype of a label-free, chip-scale photonics device designed to provide rapid, accurate, on-site detection of Ebola and other infectious diseases. Dubbed the single-particle interferometric reflectance imaging sensor (SP-IRIS), the device has the potential to minimize or possibly eliminate sample preparation time and to reduce processing time from two or more hours down to approximately one hour, according to an article on the university's Web site. If commercialized, the device would also offer a low-cost, relatively simple-to-use alternative to current label-based lab equipment, according to the team.

"To detect and size nanoparticles, SP-IRIS shines light from visible LED sources on nanoparticles bound to the sensor surface, which consists of a silicon-dioxide layer on top of a silicon substrate," Selim Ünlü, a BU professor of biomedical engineering, electrical and computer engineering, and materials science and engineering, told MD+DI. "Interference of light reflected from the sensor surface is modified by the presence of particles producing a distinct signal that reveals the size of the particle."

"We have successfully detected low-index dielectric particles down to 60 nm and various viruses—H1N1, VSV, Ebola—with accurate size discrimination," Ünlü added. "Single nanoparticle detection with IRIS led to virus detection as well as  protein and DNA arrays with attomolar detection sensitivity in serum and unprocessed whole blood." The developers are currently working on further reducing the time the device takes to yield results—with an aim of 30 minutes—and anticipate that a field-ready version of the device may be available in five years.

In the face of the escalating Ebola crisis, the company has ramped up its efforts; however, it has been quick to quell speculation and misguided expectations about when a rapid, point-of-care test capable of diagnosing or ruling out Ebola will be available. "I want to strongly emphasize that this is a new three-year project, building off work commenced in 2010,” Simpson said in an August statement. “We understand the critical nature of this virus and are doing everything possible to accelerate efforts to develop reliable and rapid result diagnostic kits in order to be ready for the next outbreak.”

The company announced in August that it had entered into an agreement to be acquired by German specialty diagnostics company Orgentec Diagnostika.

In contrast, the Firefly system does not require any specific training to use and, in turn, can be used in remote areas where trained personnel can be scarce. The system is also not limited to blood; it can yield a diagnosis using saliva, a cheek swab, and urine, among other sample types.

The company is making progress tailoring its current platform for Ebola. "The system is currently in bench-top prototype development, but the cartridge has already demonstrated the ability to detect and identify common pathogens and diseases using DNA and RNA analysis, which is how they currently test for pathogens ranging from influenza to Ebola," Tomek said. "Firefly Dx is built to test for pathogens using any assay, and the assay currently used in labs to detect Ebola will run on Firefly. We expect to have units to test in the field in late 2015."

N-Assay Rapid Test
Last month, Ohio-based biotech company NanoLogix Inc. announced that it, too, would enter the fray by exploring how to adapt its N-Assay Rapid diagnostic kits to detect Ebola. “The company has been aware of the virus detection capabilities of the technology since the N-Assay development. Viruses viewed as public health concerns prior to Ebola and Enterovirus were Influenza, the common cold, and HIV, none of which have an immediate or near-immediate threat of mortality," NanoLogix CEO Bret Barnhizer said in an October statement. "Until recently, NanoLogix has been focused solely on the use of their N-Assay kit for bacteria detection and identification. Now, with the recent outbreaks of both Ebola and Enterovirus, there is an immediate need for configuration of the N-Assay for viruses."

The roadblock for NanoLogix, however, is that its facilities are not equipped for virus testing. In light of this barrier, the company is seeking a corporate partner that has the necessary facilities to help bring the N-Assay for Ebola to market. If the company is able to find a suitable partner, it believes that the N-Assay ELISA could yield results for Ebola in 30 minutes to several hours and could be used in both developed and remote areas.

NESDEP IU
Earlier this year, F Cubed LLC was awarded the 2014 North America Frost & Sullivan Award for Technology Innovation Leadership for its portable NESDEP IU MRSA test kit, for which it is about to start clinical trials. Now, the Indiana-based molecular diagnostics company is examining how it can extend the technology and apply the system, fueled by the company's F3 microfluidic biochip, to Ebola detection.

"We know we can test for any molecular material," Les Ivey, president and CEO of F Cubed told WNDU last month. "Ebola is an RNA virus, so it has a strand of RNA and we can detect that. The job of our NESDEP device is to extract that RNA from the virus. If it matches with the Ebola then we know we had a successful detection."

As its first step, the company is working on developing a test kit that identifies whether or not Ebola is present in objects or surfaces that a potentially infected person may have touched. However, the company hopes to then progress the test kit and navigate the more demanding regulatory hurdles involved with detecting and diagnosing Ebola in patients. The company expects that its technology could deliver test results in about 90 minutes. It's also portable—although not exactly lightweight at 50 lbs—and doesn't require highly skilled professionals to operate, according to the company. The device also carries a hefty price tag, WNDU reported, costing $50,000 while test kits range from $20 to $50 each.

Gene-RADAR
The emerging field of nanobiophysics—combining physics, nanotechnology, and biomedicine—has spawned development of the GENE-Radar device by Massachusetts-based Nanobiosym Diagnostics. Led by CEO and founder Anita Goel and featuring influential advisors such as MDEA Lifetime Achievement Award winner and MIT professor Robert Langer, Nanobiosym was established to "commercialize the Gene-RADAR technology platform to empower people worldwide with portable, rapid, and accurate information about their own health," according to the company's Web site. "Employing the latest advances in nanotechnology, Gene-RADAR is a fully portable, chip-based diagnostic that can recognize any disease with a genetic fingerprint from a single drop of blood or saliva without the need for lab infrastructure, trained health care personnel, electricity, or running water."

The technology has generated a great deal of buzz for its potential to rapidly and easily diagnose HIV and other diseases. But the company has also stated that it is investigating the possibility of adapting the platform to test for Ebola. If successful, the technology could diagnose the disease within an hour for a mere several dollars per test, according to the company.

BioThreat-E Test
While most rapid diagnostic tests for Ebola are still in development, the BioThreat-E test quickly became a technology to watch upon receiving FDA Emergency Use Authorization (EUA) for Ebola last month. Manufactured by Utah-based BioFire Diagnostics—which was acquired by bioMerieux earlier this year—the test is currently available to high and moderate complexity clinical laboratories in the United States, and can deliver results in one hour. The company's previously cleared BioFire FilmArray system, on which the fast-tracked EUA Ebola test runs, is a PCR molecular diagnostic instrument designed to identify infectious diseases.

“This EUA and FilmArray test for Ebola are the result of a long collaboration and close working relationship with U.S. Department of Defense. The FDA has been an excellent working partner, providing the feedback needed to ensure the efficacy of such an important diagnostic test,” Kirk Ririe, CEO of BioFire Defense, said in a statement last month. “It is our mission to help improve public health and the rapid turnaround and ease-of-use of FilmArray will certainly be a great help for the healthcare professionals in the context of the Ebola outbreak.”