Advances in Resins and Films Reach the Market

From the July issue of Medical Product Manufacturing News

Advances in Resins and Films Reach the Market

A new version of Tyvek from DuPont (Wilmington, DE) spearheads the new materials either recently introduced or coming out later this year. The new Tyvek, a high-density polyethylene, is the first new style for medical packaging that DuPont has introduced in 20 years, says Michael Scholla, segment leader. It is expected to debut in July.

The material's lower basis weight is the main improvement from its predecessors. While the 1073B style carries a basis weight of 2.2 oz/sq yd, and the 1059B has one of 1.9 oz/sq yd, the new version is 1.6 oz/sq yd. "The style has been designed specifically for form, fill, and seal applications and improved bar code readability," Scholla says. "There are lots of things this could impact." 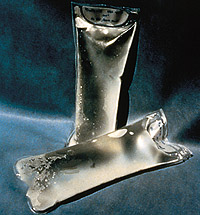 Dow Plastics' syndiotactic polystyrene, a semicrystalline polymer, is one of the films and resins that have been recently introduced.

Dow Plastics (Midland, MI) recently introduced a metallocene polyethylene film, MDF 7200, which could become an alternative to polyvinyl chloride (PVC). Future generations are in the works. "It has a number of properties superior to PVC," says Bruce Lipsitt, development leader. "It has the same softness and flexibility as PVC, but with superior tear strength and tensile strength. It has better puncture resistance and impact resistance. It allows the user to downgauge to a center-gauge, producing a higher yield than PVC."

Bags and inflated devices are its primary applications, according to Lipsitt. "But it cannot be steam sterilized, so that limits some of its applications," he says.

A paper presented by Hermanson and a colleague showed SPS can be sterilized by repeated autoclave cycles, gamma radiation, and EtO. In addition, the resins can fill thin-walled parts without excessive injection pressures. Applications include reusable surgical instruments, dental equipment, and sterilization trays, Hermanson says.

Earlier this year, Perfecseal (Philadelphia) introduced PerfecFlex ShieLLD, a linear low-density polyethylene (LLDPE) film, its first using catalyst technology. The film can be produced at a 3-mil gauge, and is 150% stronger than conventional 4-mil LLDPE film, the company says. And when produced at 4 mil, the product is 238% stronger.

Using the product at 3 mil means the manufacturer uses less material per package, leading to packaging source reduction and lower freight costs, according to Perfecseal. Applications include heavy trays and header bag packaging for large devices.

The greater strength derives from the narrow or controlled molecular weight distribution of the polyethylene polymer. Specialized equipment is required to produce the film, which cannot be processed using conventional extrusion machinery.

More recently, Perfecseal released PerfecFlex Ice film, a material constructed from nylon and LLDPE. The company says the nylon component offers overall mechanical strength, abrasion and puncture resistance, and good formability when combined with the LLDPE. It can perform at a thinner gauge, typically 2 mil less, than EVA/ Surlyn/EVA films, and provides a higher yield. It protects devices with sharp protrusions and can prevent packaging abrasion during shipping. It is available in gauges of 3, 4, 5, 6, and 8 mil.

Soon to reach the market from Ellay Inc. (City of Commerce, CA) is a line of PVC films and compounds formulated with vegetable-based additives. Developed in response to proposed mandates from Europe, these Class VI films and compounds do not contain tallow derivatives and meet U.S., European, and Asian Pharmacopoeia requirements. Applications include blood contact, storage, and processing systems; drug delivery and solution containers such as IV, total parenteral nutrition, and enteral feeding bags; dialysis bags; and extruded and injection-molded components. — Erik Swain

Conference to be held September 23–26

Prominent medical device designers will lead discussions focusing on the theme "Why Design?" at the 1998 Industrial Designers Society of America national conference to be held September 23–26 in San Diego.

"What difference does design really make? Why do people want to design? This exploration can help us understand the reality of today's market for design," says conference chair Ken Schory, citing an example of an issue that will be discussed at the conference.

The conference will feature in-depth workshops on topics ranging from medical product design to human factors. Among the highlights of the conference will be exhibits of 1998 Industrial Design Excellence Awards in the Hotel del Coronado's gallery and a gala dinner and ceremonies in Balboa Park.

Recognition given for linear stepper motor 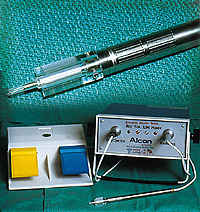 This intraocular lens insertion system was developed to solve the problems associated with inserting foldable lenses through incisions only 3.0 mm long.

The linear stepper motor powers an automated intraocular lens insertion system. The system was developed by Micro Medical Devices to address the current problems associated with the insertion of foldable lenses through small incisions of approximately 3.0 mm in length.

For more information on Micro Medical Devices Inc., contact the company at 330/463-5650. For information about the awards program, contact Enterprise Development Inc. at 216/229-9445.