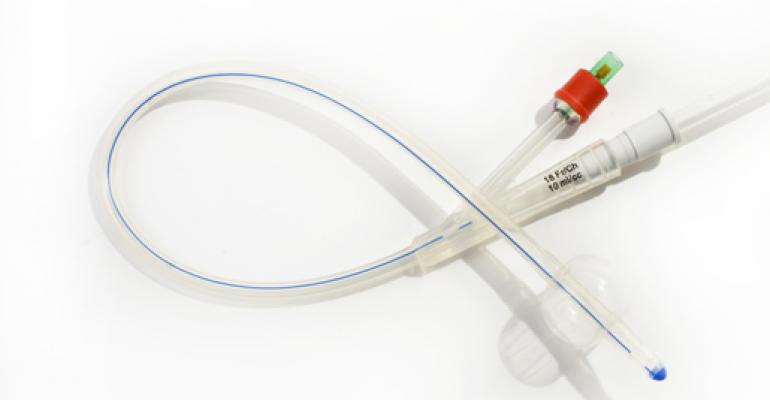 A catheter with a lubricious coating.

In the world of low friction, lubricious coatings for medical devices are diverse and complex. There are many different types of coatings, each with their own advantages, disadvantages, and applications. This is a basic overview of the most popular medical device coatings and what can be expected from each type.

Lubricious coatings are most commonly distinguished by their degree of lubricity, or the amount of reduction in friction they provide. To understand what these measurements mean, we must first learn how these measurements are obtained. In the medical device industry, friction is measured by what is known as a pinch test. In a pinch test, a coated device is secured on an instrument that pulls the device between the jaws of a clamp which produces a load on the part. While clamped, the coated part is pulled at a fixed speed for a fixed distance, and the resistance to the pull is measured in grams of pull force. The grams of pull force needed to overcome the friction produced by the clamps divided by the clamp force yields the coefficient of friction (CoF).  CoF = Forcepull/ Forceclamp

Now that we have an understanding of how the CoF is obtained and the significance of the different amounts of grams of pull force required, we can take a look at some commonly used coatings and compare them.

Before we look at the different types of coatings, let's begin by looking at the properties of an uncoated sample to provide a reference point. A very common material used in medical devices is PEBAX® (a registered trademark of Arkema, Inc.), the brand name of polyether block amide. When uncoated, PEBAX® (hardness of 55 ShoreD) generally produces pinch test results of about 500 to 600 grams of pull force. Assuming a 500-gram clamp force was used, the CoF would be (1.0-1.2), a very low level of lubricity. Other uncoated catheter materials of construction such as nylon 12, polyethylene, and others exhibit similar CoF.  Such a high level of friction would make many of today's catheter-delivered minimally invasive procedures nearly infeasible.

Device manufacturers have turned to a variety of coatings to provide the surface lubricity not offered by the bare catheter material. The first class of coating is silicone oil (siloxane). This type of coating has long been used to reduce surface friction on medical catheters, introducers, etc. It is generally applied by the manufacturer, and is relatively inexpensive. It offers a much reduced CoF, at about 0.13, and approximately 125-175 grams of pull force. However, devices coated with silicone oil can be difficult to apply as they are very mobile and can spread to other manufacturing areas where they are undesirable. For example, the presence of silicone oil on a surface can prevent other surface-enhancing coatings from adhering to the device surface. Once silicone oil is present, it can be very difficult to clean from a device or work surface. As a result, these coatings can be a major contaminant risk to the manufacturer.

The second class of coating is PTFE (Polytetrafluoroethylene), known best by the brand name Teflon®, another popularly used material to reduce friction. It has been employed as a material of construction for catheter-type products or as an added coating for guidewires and other devices made from metal. PTFE typically exhibits between 150 and 200 grams of pull force, or a CoF of about 0.3 - 0.4. On bare metals such as stainless steel and nitinol, PTFE offers performance similar to that of silicone oil. The main advantage of PTFE coatings is that they provide some level of lubricity while dry and do not require any source of moisture to perform.

Hydrophilic coatings are the third class of coatings employed to reduce surface friction and enhance lubricity. The term "hydrophilic" means that it is water loving. In other words, it readily wets out when exposed to moisture. Most hydrophilic coatings consist of a loosely cross-linked polymer coating that will readily uptake liquid when exposed to a source. This coating that surrounds the device acts like a microscopic sponge and the water (or other liquid) provides excellent low friction characteristics as long as the coating remains wet. Compared to PTFE coatings, which are hydrophobic and repel water, hydrophilic coatings provide superior lubricity (lower CoF) when wet. Devices coated with these coatings demonstrate pull forces as low as 3 grams and CoF values as low as 0.01. In clinical use, devices coated with hydrophilic material demonstrate superior control, exhibit lower stiction (static friction) behavior, and require far less force to perform any given movement. Ranging from 3-25 grams of pull force, hydrophilic coatings offer the best CoF, averaging between .01 and .05. This high level of lubricity enables devices to navigate tortuous anatomical pathways while reducing tissue irritation and adding to patient comfort.

Some types of hydrophilic coatings may generate particulates from their surface in use. For these applications where particle generation from a coating is critical, such as cardiovascular and neurovascular, the selected formulation must be one designed specifically for low particle generation. The only real limitation of this category of coatings is that they must be hydrated to perform.

Commercially available hydrophilic coatings average between 8 and 12 grams of pull force that reduces friction over an uncoated surface by as much as 98%. This type of low-friction performance increases the device's ability to navigate through tortuous anatomical pathways, improves device control, reduces tissue damage, and adds to patient comfort.

Kevin Guenther is the methods director at Harland Medical Systems, a medical device coating technologies company based in Eden Prairie, MN. He can be reached at [email protected].