Researchers at the University of Pennsylvania have produced a placenta-on-a-chip, and their study could help determine causes of premature birth. 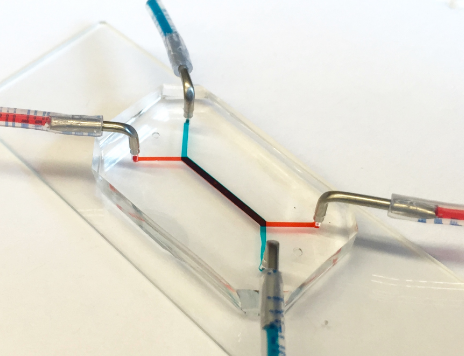 Researchers at the University of Pennsylvania have produced a placenta-on-a-chip that can "fully model the transport of nutrients across the placental barrier," according to a statement from the university.

The researchers' placenta-on-a-chip is a clear silicone device with two parallel microfluidic channels separated by a porous membrane. Trophoblast cells, which are found at the placental interface with maternal blood, are grown on one side of those pores. On the other side are endothelial cells, found on the interior of fetal blood vessels. The layers of those two cell types mimic the placental barrier, the gatekeeper between the maternal and fetal circulatory systems. The channels allow researchers to study how molecules are transported through, or are blocked by, that barrier.

That barrier will either transport nutrients and foreign agents like viruses from mother to fetus or stop them, according to graduate student Cassidy Blundell, a graduate student in the laboratory of lead researcher Dan Huh, an assistant professor of bioengineering in Penn's School of Engineering and Applied Science.

"One of the most important function(s) of the placental barrier is transport," Huh said in a statement from the university, "so it's essential for us to mimic that functionality."

Research on the team's placenta-on-a-chip is part of a nationwide effort sponsored by the March of Dimes to identify causes of preterm birth and ways to prevent it. Prematurely born babies may experience lifelong, debilitating consequences. The underlying mechanisms of this condition are not well understood due in part to the difficulties of experimenting with intact, living, human placentae.

The Penn researchers' study was published in the journal Lab on a Chip.

In a 2013 study at Seoul National University, Huh and his collaborators created a microfluidic device for culturing trophoblast cells and fetal endothelial cells, but it couldn't form physiological placental tissue and accurately simulate transport function of the placental barrier. In their new study, the Penn researchers have demonstrated that the two layers of cells continue to grow and develop while inside the chip, undergoing a process known as "syncytialization."

"The placental cells change over the course of pregnancy," Huh said. "During pregnancy, the placental trophoblast cells actually fuse with one another to form an interesting tissue called syncytium. The barrier also becomes thinner as the pregnancy progresses, and with our new model we're able to reproduce this change.

"This process is very important because it affects placental transport and was a critical aspect not represented in our previous model."

The Penn team validated the new model by showing how glucose transfer rates across this syncytialized barrier matched those measured in perfusion studies of donated human placentae.

Other organs-on-chips, such as ones developed by Harvard spinoff Emulate, can help researchers predict human responses better than cell-culture or animal-based testing can. Emulate wants to add the kidney, heart, and brain to its product mix, and is working with the Michael J. Fox Foundation to study Parkinson's disease drug safety.

[image courtesy of UNIVERSITY OF PENNSYLVANIA]