Medical-Grade PVC Just What the Doctor (and Recycler) Ordered 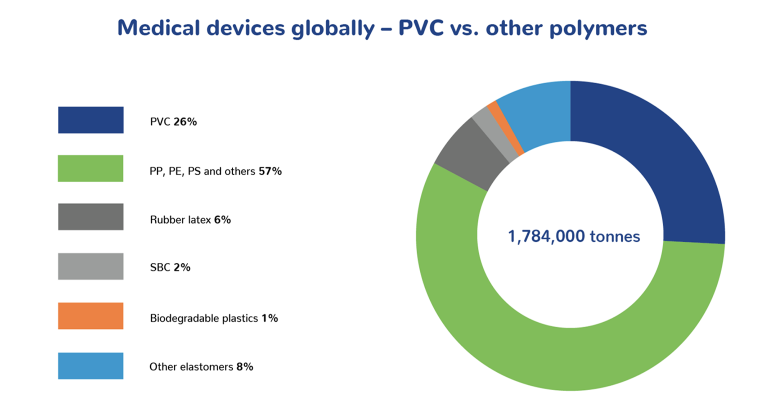 PVC is the most widely used polymer to manufacture single-use medical devices and will remain so for the foreseeable future because of its versatility and recyclability, according to a new study.

PVC is the most widely used polymer to manufacture single-use medical devices and will retain that position for the foreseeable future, according to a new study from Global Market Insights. The research was made public this week by PVCMed Alliance, part of the European Council of Vinyl Manufacturers representing the PVC medical industry value chain.

Almost 30% of plastics-based medical devices are made from PVC, which is typically used to manufacture bags, tubing, masks, and other disposable medical devices, according to the study. It also forecasts that PVC will retain its hold on the number one spot until at least 2027.

One of the many virtues of the polymer resides in its versatility — because it can be formulated to be flexible or rigid to varying degrees, devices requiring those properties can be made from a single polymer. This, in turn, facilitates recycling.

“COVID-19 has highlighted the crucial role played by single-use plastic medical devices in the prevention and control of infection in hospitals,” said PVCMed Alliance Project Manager Ole Grøndahl Hansen commenting on the findings. “The negative side effect of this success has been growing amounts of hospital plastic waste. We believe recycling is part of the solution. Fortunately, the most used plastic in healthcare is also the most recyclable plastic, and we urge hospitals to start their recycling activities with PVC,” said Hansen.

As Hansen explained in an article published in PlasticsToday in March 2020, “a device made from different polymers is [hard] to recycle because of their different processing temperatures. Paradoxically, the trend toward so-called “PVC-free” medical devices often results in switching from a single-polymer design to a multi-layer device. Because of PVC’s unique properties — versatility in formulation, water-vapor impermeability, oxygen impermeability, and medical approvals throughout the world — PVC is the ideal choice for designing single-layer medical devices.”

Some past studies have concluded that certain types of PVC-based devices exhibit the presence of carcinogenic, mutagenic, and/or reprotoxic substances, preventing their addition to the recycling stream. That is no longer a cause for concern, according to Hansen. “For almost all applications, alternative plasticizers for PVC are available and are being used. Four of these are now included in the European Pharmacopeia, which sets the safety and quality guidelines for medical products in Europe and beyond,” said Hansen.

Through the VinylPlus program, the European PVC industry has spearheaded the recycling of PVC medical devices since 2014. That year, the RecoMed take-back scheme was established in the UK, inspired by successful recycling projects involving more than 250 hospitals in Australia and New Zealand. (Read “A Path to Recycling Medical Plastic Waste from Down Under” for insight on those projects.)

In February 2021, VinylPlus launched a collaborative project called VinylPlus Med. Aimed at accelerating sustainability in healthcare across Europe through the recycling of discarded single-use PVC medical devices, the project brings together hospitals, waste managers, recyclers, and the PVC industry in select European countries.

The scheme will focus on the production of PVC recyclates free of substances of concern that can be included in a range of value products marketed across Europe. Belgium was chosen as a pilot country in partnership with The Europe Hospitals; Renewi, a waste management company; and recycler Raff Plastics. Similar programs are being ramped up in other European countries.