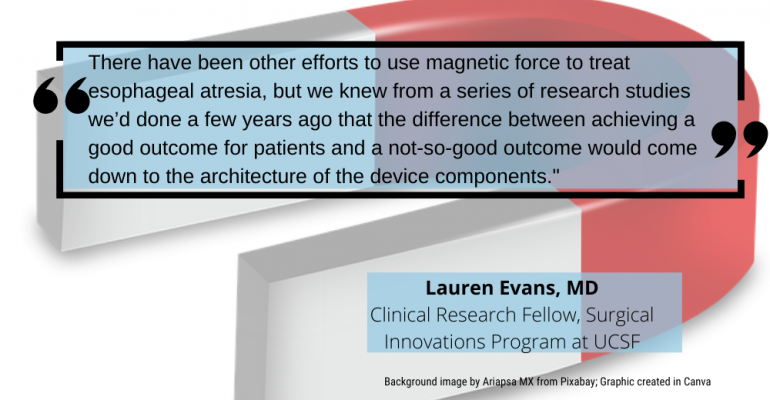 The University of California at San Francisco’s Surgical Innovations program is working with ProPlate to develop advanced magnet electroplating for medical devices.

From cardiovascular disease to cancer to gastrointestinal tract conditions, the incredible strength of neodymium iron boron (NdFeB) rare earth magnets is opening up exciting new opportunities for surgeons and engineers working on the cutting edge to bring new care options to patients with tough-to-treat conditions. As with any new technology, however, incorporating NdFeB magnetic elements into sophisticated new medical devices requires utmost care during development and manufacturing. Engineers must ensure that such devices can be used while maintaining an incredibly high level of safety—for patients as well as for the doctors and nurses who care for them.

ProPlate recently hosted a wide-ranging discussion with members of the University of California at San Francisco’s Surgical Innovations program to explore the inside story on the drive to find new and better ways to treat children born with the highly debilitating congenital malformation known as esophageal atresia. This effort has given rise to a groundbreaking new category of devices leveraging magnetic force and precision-engineered tissue-contacting surface architectures. The partnership with ProPlate has been a key element in progressing this device development program to the stage where multiple patients have now been treated for esophageal atresia—with exceptionally favorable results.

In a highly productive collaboration that kicked off last year, the UCSF Surgical Innovations program, one of the country’s premier medical institutions, and our team at Minnesota-based medical device specialty manufacturer ProPlate have been working closely together to develop advanced NdFeB magnet electroplating methods optimized for medical devices to prevent corrosion of potentially toxic elements.

Participating in the discussion are UCSF’s Dr. Lauren Evans MD and Dr. Michael Harrison MD. Dr. Evans is currently working as a clinical research fellow with the Surgical Innovations Program at UCSF and in pediatric trauma surgery at Benioff Children's Hospital Oakland. Dr. Harrison is Professor Emeritus of Surgery and Pediatrics and the Director Emeritus of the Fetal Treatment Center at UCSF, and he has a special interest in fetal surgery.

Dr. Evans: Let’s start with an explanation of esophageal atresia and its complications. Esophageal atresia is a congenital malformation where a baby is born with their esophagus in two pieces, so their mouth is not connected to their stomach. This is a condition that we see in about one in 3000 births. That might not sound like a lot, but it translates into several hundred cases a year just in the United States.

Of course, it’s essential that the esophageal atresia be repaired so that the patient’s mouth and stomach are in continuity and they can eat. We’ll often insert a tube into the stomach, which is a temporary measure that allows a patient to receive nutrition until the patient is in a condition where we are able to go in and repair their esophagus. The repair is traditionally carried out through the chest, often through a pretty large incision that extends all the way from the shoulder blade to the front of the chest, which takes up about half the width of the chest wall. The chest is opened up, and then the surgeon sews the two parts of the esophagus together by hand. We call this creating an anastomosis. Anastomosis is the term we use any time we make a connection between two things in the body that weren't previously connected.

While this method of repairing the atresia has saved many, many lives over the years, in the practice of surgery and medicine we’re always looking for ways to get better outcomes for our patients. And in fact, with esophageal atresia repair by hand sewing, there are significant issues, in particular a tendency for scarring that can later cause narrowing of the esophagus, which can be a very, very serious condition. Another risk is leaking of the esophageal contents through the suture line. With both of these issues—narrowing of the esophagus and leaks—kids can get quite sick and additional surgeries can be needed, which of course we really don’t want to have to do; we want to get these kids to where they’re staying out of the hospital, where they’re at home growing and thriving just like other kids.

Dr. Harrison: So that’s what motivated us in the pediatric surgery group at UCSF: To develop an approach to repairing esophageal atresia that is, first, less invasive, to avoid that very large incision Dr. Evans described; and second, where it is less likely that the patient will, some number of days or months after the repair procedure, end up in a difficult situation because of something like a leak or a narrowing of the esophagus. The narrowing is called a stricture.

We knew the effort to find a new approach to esophageal atresia would be a major undertaking, so it was important to have the right resources in place and the right people involved. Our home base has been the UCSF Surgical Innovations Initiative, which was set up some years ago specifically to leverage the diverse and truly outstanding expertise inside UCSF to pioneer new approaches to surgical procedures. It includes an amazing group of engineers as well as surgeons spanning a wide range of surgical specialties. And it has some tremendous infrastructure, for example some of the most advanced 3D printing capabilities you could find anywhere.

Outside of UCSF, an individual we brought in who has been incredibly important for the program is Dr. Oliver Muensterer, who is an absolutely amazing pediatric surgeon and a very forward-thinking individual. There are many others who are heavily involved; one to highlight is a group at the Harvard-affiliated Boston Children’s Hospital, including Dr. Rusty Jennings and Dr. Michael Manfredi.

And we want to be sure to highlight the Pediatric Device Consortium. Let me tell you a little bit about the PDC. FDA recognized about 10 years ago that there was a tendency for less innovation to occur in pediatric medical devices. The reason primarily is that for many pediatric indications, the number of patients involved simply isn’t a very large number of patients, and this tends not to work well with the economic models of the private-sector capital sources that are important drivers of innovation in the development of medical devices for many adult patient populations. So FDA developed a mechanism that allowed them to inject several tens of millions of dollars, over a period of time, to spur innovation in pediatric devices, with this funding organized around a set of specific sites around the country.

Dr. Evans: And so that's how the Pediatric Device Consortium started. Dr. Harrison was awarded the first grant to start a pediatric device consortium site at UCSF. That has been extended and now is a joint site with Stanford. And there's four other sites around the country that have similar kind of accelerator-style programs where they'll actually do outreach to various different companies trying to create devices for pediatric conditions, where we can give small grants to stimulate device development.

Dr. Harrison: As we dove into the project, an idea that had a lot of appeal from fairly early on was using magnetic force. In a hand-sewn anastomosis, sutures are used to bring the walls of the upper and lower pouches into contact with one another so that they can heal together. We thought, what’s a way of bringing these layers of tissue into contact with one another so they can heal, where it can be done without sutures? Since to perform the suturing typically requires the large chest incision that we want to avoid.

Because these kids can’t receive nutrition through their mouths, they have tubes already placed in their stomachs, and we realized we could bring one component of a magnetic force-based device system up into the lower pouch of the esophagus by way of the stomach tube. Bringing a second component into the upper pouch would be fairly straightforward, with that pouch being accessible through the mouth.

Dr. Evans: There have been other efforts to use magnetic force to treat esophageal atresia, but we knew from a series of research studies we’d done a few years ago that the difference between achieving a good outcome for patients and a not-so-good outcome would come down to the architecture of the device components. In particular, we knew that it would be essential to engineer devices that mate with one another where the mating surface creates a little bit of what the engineers would call radial shear in the interposed tissue. The radial shear spurs central necrosis and simultaneous peripheral healing, and the combination of those two is what sets the patient up for a favorable outcome, with low likelihood of stricture or leak. 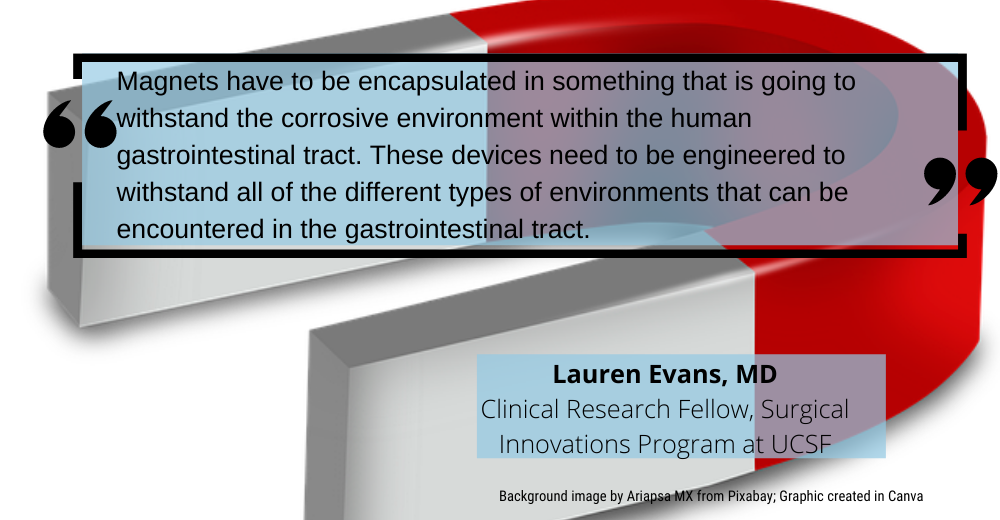 Dr. Harrison: It was through a joint effort between our group and Dr. Muensterer that we were able to design and carry out a set of very important studies that are what we call preclinical studies, which are incredibly important in our gaining an understanding of how new types of devices could be used to repair esophageal atresia.

Dr. Evans: At the same time, we started to delve into the practical issues of engineering device components—we call them anchors—that incorporate powerful magnetic elements while being absolutely safe for the patient. Magnets have been used in surgery for quite a long time and have found very important applications in some specialized areas, but there are many challenges with magnets. For instance, many materials that have favorable properties from the standpoint of magnetic force are toxic to the human body. So the magnets have to be encapsulated in something that is going to withstand the corrosive environment within the human gastrointestinal tract. These devices need to be engineered to withstand all of the different types of environments that can be encountered in the gastrointestinal tract.

Dr. Harrison: So that’s where the partnership with ProPlate became so important. Here, the anatomy we’re working in requires very small devices—only a few millimeters in size. With the neodymium material, we knew we’d need to use the right amount for magnetic force, while addressing the material toxicity issues and the fragility of neodymium.

Ross Peterson: The manufacturing process for making NdFeB magnets involves a sintering process that results in a highly porous surface. The electroplating challenge was to provide a corrosion resistant surface, increased mechanical strength to the fragile sintered magnet, and perfectly pore-free coverage to the highly porous magnet surface.

Dr. Evans: We were thrilled that ProPlate was able to engineer a multilayer plating process that confers really amazing mechanical and chemical integrity to these tiny devices, where they can tolerate any combination of forces and impacts they might possibly encounter during placement.

Dr. Harrison: With all the experience and research gained with these new devices, there is endless opportunity for growth in the medical field. With this device, it has already been thought of using it for similar malformations; we see atresias in other parts of the bowel, like duodenal atresia, and we can build from what we have done here with esophageal atresia to be able to treat those atresias further down in the GI tract.

Dr. Harrison: With all this knowledge of how magnets can be safely incorporated into medical devices, the future for this field is boundless.

ProPlate will be exhibiting at MD&M Minneapolis November 3-4 at Booth #1845.